Kumble spins back into action

Kumble spins back into action

Named after the 10 wickets he took in a Test match inning against Pakistan in 1999 in Delhi, TENVIC is former Indian cricket captain Anil Kumble’s latest multi-pronged sporting venture, which will work on making sports more accessible to children and hone their talent by providing them with a structured mentoring process. 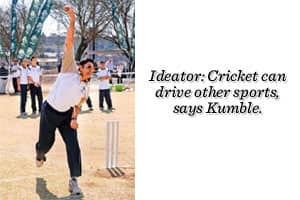 Kumble retired from international cricket in 2008 after 132 Test matches and 619 wickets, the highest number of wickets for an Indian cricketer and the third highest in the world.

The idea for TENVIC came from former table tennis player Vasanth Bharadwaj, who is one of the co-founders along with Anil Kumble and his brother Diinesh Kumble. The founders have put in 30% of the money—the rest comes from an angel investor. TENVIC comprises a team of over 45 people, including sportspersons and alumni of leading business schools with expertise in sales, marketing, business strategy, organizational development and brand building. It has three programmes— Grassroots Sport, Lessons from Sport, Branding and Sport.

Grassroots Sport in schools provides structured coaching to help children excel in sports of their choice. At the moment, this includes cricket, badminton, chess and table tennis.

“Cricket has the power to drive other sports and we don’t have a sporting culture. We only look at how we are faring based on events that take place once in four years. So it was important to put a structure in place which will be assessed periodically," said Kumble, adding that the venture was a good financial proposition, not just a matter of giving back to sport.

TENVIC, which started nine months ago, works with 300 children through eight schools in Bangalore, Mangalore, Mysore and Gurgaon. It aims to reach over 80 schools by year-end. “We have gathered the best in various sports to work as mentors and create a syllabus and training structure," said Kumble. These mentors include cricketer V.V.S. Laxman, India’s highest-ranked table tennis player Achanta Sharath Kamal, former badminton player and now coach Prakash Padukone and former chess player D.V. Prasad; they have helped TENVIC identify sports-related training and develop training content.

“There will be other coaches who, in turn, will coach children from schools across the country," said Bharadwaj, adding that training sessions are aided by technology that allows both parents and coaches to scientifically assess what a student is lacking in method and form.

“We have chosen sports that are not challenging infrastructurally, so even schools with small campuses can opt for them," said Kumble, mentioning that in-house research suggests India tends not to do so well in contact sports like football, and fares better in sports that need strategizing and method.

The TENVIC website (www.tenvic.in) will also feature a series of videos that will demonstrate “how to play" for various sports. “This will help those who want to casually pick up a sport, watch and learn," said Bharadwaj.

In the programme Lessons from Sport, sporting personalities like Kumble himself will share with companies lessons from sporting careers that can be applied to team building and business strategizing. “The material for this has been developed by a team of management professionals we have in-house who take the experiences of all these sportspeople and make the session valuable for leaders in various corporates," said Kumble. So far, they have worked with clients like Pepsi, Intel, SAP, Pearson Edurite and Crompton Greaves.

“There are lots of things that you can learn as a sportsperson from corporate culture as well because they have a result-oriented approach. How to form a team that will get results and make them deliver professionally is what a sporting leader can learn from them," said Kumble.

Training and mentoring will also be offered to sportspersons who get in touch with them for guidance on handling the pressure of performing. “Sometimes dealing with sudden success or failure can require mentoring," said Bharadwaj.

Asked if the company would help sportspersons deal with media interactions and select brand endorsements, the three founders responded with a firm no. “We believe that it is a space that has already been addressed and we don’t have the expertise to advise in that regard," said Bharadwaj.

But TENVIC will help sport start-ups and ventures connect with bigger companies which wish to participate in branding exercises that will project their support for sporting activities.