That sense of history

That sense of history

I’m a parent and it’s tough to see what happened there. You’ve seen the amount of children who died. You have to see it first hand."

The gas chambers of Auschwitz have produced far more evocative reactions than Wayne Rooney’s but the England footballers who visited the camp before Euro 2012 were moved in their own way. The trip was facilitated by former Chelsea coach Avram Grant, who lost 15 members of his family there and who visits each year in homage. They were shown everything: the place where the prisoners arrived, where they were “selected" to live or die, and where they eventually did both. Grant pointed out the “changing rooms" where the prisoners were led en route to the gas chambers, deliberately subverting an innocent footballing term to drive the message home. 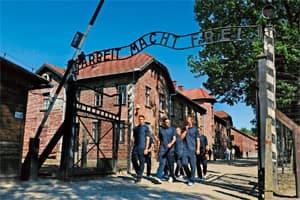 In his own way, Rooney had articulated the rationale behind the exercise. To the hoodie generation, the Holocaust may well be the name of the latest thrash-metal group, too far back in history to merit a second thought. The tragic consequences of racism and anti-Semitism—both live issues during Euro 2012—crossing the tipping point are rarely contemplated; that’s where the likes of Rooney and his teammates come in.

Or Michael Owen, who along with David Beckham visited Auschwitz in 2004 and afterwards said: “It was the kids. That was what got me. When they arrived, they thought that if they worked hard, everything would be fine. That’s what they told them. It was all lies." Are sportsmen—the top ones, the biggest stars—affected, or motivated, by events of the past, events outside their football pitch or cricket field or boxing ring? Do they even want to know? Do they really want to get out of their comfort zone and engage with reality? If they do get the message, can they spread it? And if they do, would we buy it?

Sportsmen are often more curious, and thoughtful, than we think. Few more so than Australian cricketers, for whom events from their country’s history have proved hugely inspirational. En route to England for the 2001 Ashes, Steve Waugh’s team made an emotional, hugely symbolic two-day halt at Gallipoli in Turkey, where close to 9,000 soldiers from Australia and New Zealand died in one World War I (WWI) battle. At the battleground, players were encouraged to speak on what the experience meant to them; coach John Buchanan wore his father’s World War II medals and Matthew Hayden tried to emulate the soldiers who climbed the cliff-face with their backpacks. The players also re-enacted the cricket match played there by Australian soldiers in 1915 as a way of diverting enemy attention while Allied troops were being evacuated.

Gallipoli would have been a considerable detour for the Australians ahead of such an important series but Waugh, in his autobiography, wrote of the “profound effect" it had on his team, especially the increased unity. It showed on the field, Australia winning the Ashes 4-1 and winning the One Day Tri-Series as well. In 2005, Ricky Ponting’s team visited the village of Villers-Bretonneux in France, which in 1918 was recaptured from the Germans by Anzac (Australian and New Zealand Army Corps) soldiers. In 2009 England—to whom Buchanan was now a consultant—returned the compliment by visiting Flanders Field, another WWI battleground, ahead of a 2-1 Ashes series win. Homage: Captain Ricky Ponting placing a wreath during the Australian cricket team’s visit to the cemetery near Villers-Bretonneux in France in 2005. Hamish Blair/Getty Images

Overt nationalism in Indian cricket first arose during Sourav Ganguly’s captaincy and was symbolized, if tangentially, by his shirt-twirling on the Lord’s balcony. Yet Dravid played his role too—equally emphatic, if less publicized. On that same tour in 2002, he was asked, in a magazine interview, whom he’d liked to have been in a previous life. “One of the leaders in the Indian freedom struggle," he replied.

It’s hard, though, to imagine Indian cricketers doing what Rooney and Co. did. Granted cricket tour schedules are tighter than a last-ball finish and granted that there have been the odd player excursions to historical sights—Taxila in 2004 springs to mind—but few, if any, have visited Robben Island despite umpteen tours of South Africa. I know for a fact that one former Indian captain—he shall go unnamed—believes in the value of such team excursions and regrets not having been able to organize them. 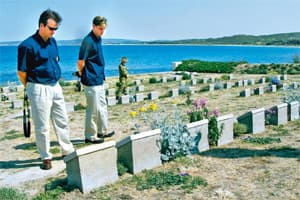 In memoriam: Steve Waugh (left) and Nathan Bracken at a cemetery in Anzac Cove during the Australian cricket team’s visit to Gallipoli in 2001. Hamish Blair/Allsport

I’ve often wondered which of India’s places of history could give our cricketers a sense of legacy and greater identity. It would have to be a place unambiguously India versus outsiders. Of all the places I’ve visited, I can only think of three: the Cellular Jail, Jallianwala Bagh and the Sabarmati Ashram. Then I think of the cost of such a visit—the press corps, the security, the ordinary visitors being locked out, the resulting prime-time TV debates, the noise and chaos. The kind of dustbin our history doesn’t need.