One 'haveli' in Old Delhi is now a heritage hotel. We visited five others that have survived and are a repository of stories and memories

It is easy to identify a haveli in Old Delhi. The tell-tale sign is an archway that usually hosts a half-awake stray dog. Within, a passage leads to a forecourt filled with clothes drying or alive with potted plants. In one corner, there could be a person lying supine on a charpoy. Most of all, it’s a labyrinth of courtyards, staircases, roofs and balconies.

What would the great Urdu poet Ghalib have felt knowing that his haveli in Ballimaran had become a coal yard? Next to nothing survives of the Haksar Haveli in Sitaram Bazaar, where Jawaharlal Nehru, who would go on to become India’s first prime minister, married Kamala Kaul. These two havelis now seem almost as fictional as the one in Mohalla Niyaryan, the locale of Ahmed Ali’s melancholy novel Twilight In Delhi.

Old Delhi’s havelis were once the palatial residences of Mughal-era nobles. If the Red Fort, home of the emperor, dominated Shahjahanabad, each haveli dominated its immediate vicinity within the Walled City. Today, few havelis survive in their original state, though a handful have managed to hang on to their wooden balconies and delicate lattice screens. The finest example is in Gali Chooriwalan.

Haveli Dharampura in Gali Guliyan was another example of those derelict mansions dotting the Chandni Chowk area. After acquiring the spacious house, Vijay Goel, a former member of Parliament from the area, restored it to its original character late last year. In January, he personally led a group of journalists through the haveli. Bedmi-aloo, a ₹ 20 street-side speciality of the Walled City, was served at the high table.

Now, the Shahjahan Suite in the WelcomHeritage Haveli Dharampura can be yours for ₹ 18,000, plus taxes, per night.

Many of the surviving havelis in the Walled City are no longer inhabited by the original owners, but have relatively new families occupying separate wings of the mansions. What is life like in these spaces? We stepped inside five old houses to capture their drift, their hüzün, as author Orhan Pamuk would put it. One overlooks the Jama Masjid, the others are situated close to each other further away, near Chandni Chowk.

We sidestepped the obvious ones: Chunnamal Haveli, Namak Haram Ki Haveli and the houses in Naughara. Not one of our five havelis finds a mention in author Pavan K. Varma and Sondeep Shankar’s classic Mansions At Dusk: The Havelis Of Old Delhi (1991). Nor are they listed in the definitive two-volume catalogue Delhi The Built Heritage: A Listing. Life in these old, majestic abodes is often just about stories and memories. 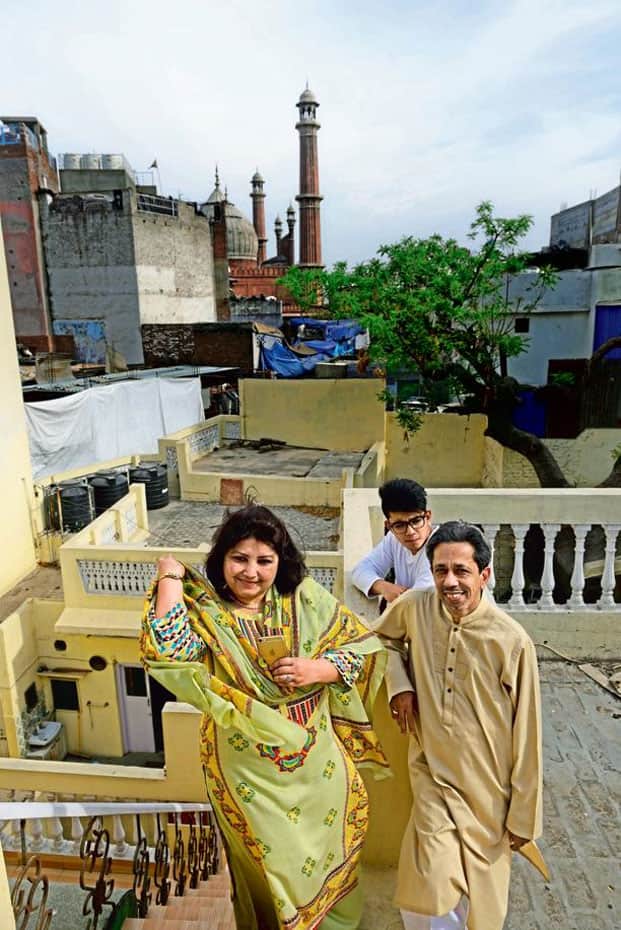 Over 100 years old, it has as many staircases as there are views of the Walled City from the roof. This is the Old Delhi home of Arshad Ali Fehmi and his wife Sheeba Aslam Fehmi. He is an activist “trying to revive the pristine glory of the Jama Masjid with the help of like-minded people". She is doing a PhD on the “Absence Of Protest Among Indian Muslim Women Post-Shah Bano".

The couple lives with their son Omaiyer, a political science student at Delhi University. Their home in Chhatta Sheikh Mangloo offers an obstructed view of the Jama Masjid. Part of the house has been converted into the 10-room Deen Duniya hotel. A subscription-only Urdu magazine, Deen Duniya, is printed from the ground floor. The magazine is edited by Arshad’s brother Asif, who commutes daily from Noida, adjoining Delhi.

Spread over 500 square yards, the three-floor house has 25 rooms, two courtyards and a neem tree. The tree is the most astounding feature of the building. With its roots beneath the ground-floor study, it makes its way up through a hole cut into the ceiling and spreads lusciously over a terrace. It lurks in every corner of the sprawling mansion, showing up unexpectedly as you walk from one staircase to another—in much the same way that the Jama Masjid keeps appearing as you meander along the cluttered lanes of the Walled City.

It’s difficult to conceive of such a place existing in cramped Old Delhi, but this home has an intimate bond with the sky. To go from one room to another, you have to walk at least a part of the distance in the open. The dining room windows look out on to terraces and staircases. The Fehmis have their breakfast on the roof in winters.

This year, they will demolish the entire structure to make way for a bigger hotel with 26 rooms. They are also planning a rooftop café.

This derelict 18th century haveli was also the original site of St Stephen’s College. A stone plaque in a corner of the courtyard briefly details the founding of the college, in 1881, with five students and three teachers.

An empty marble alcove in the wall is held sacred as a shrine of a Sufi saint called Syyed Baba. People come here on Thursday evenings to light candles. A large glass chandelier hangs over the space.

Some of the rooms that surround the courtyard have embroidery artisans working in them. They come daily from their homes in Seelampur in east Delhi. There is a shop selling chips and soft drinks. The two upper floors consist of a series of homes, some of which are empty. Most belong to the Jain community. One apartment functions as a stockbroker’s office. The top floor has the type of iron railings you no longer see these days.

“Ninety per cent of the residents have left the haveli to settle outside Old Delhi," says resident Raj Kumar Jain. “Our children don’t like living here. No parking space for cars."

Raj Kumar, who grew up in this haveli, talks of a kuan (well) in the courtyard where people from the locality would gather every evening to draw water. It was also a point for women to meet and share stories. The well is now covered. The haveli’s tehkhana (basement), under the courtyard, still exists, says Raj Kumar. It fills up periodically with water, which threatens the foundation of the building. A jet pump has been installed to drain the water.

True to the spirit of hidden places, the basement has its own legend. “Once a Mughal queen went into the tehkhana and she was never seen again," says Raj Kumar. “It is said that she lingers underneath."

This haveli is supremely picturesque. A beautiful door on one side of the courtyard stands locked. You can easily see what lies behind it—the door panel is broken. The sight is intriguing, a disorderly combination of the ethereal and the ugly. Intricately carved pillars are wrapped in blue plastic. Kellogg’s cardboard cartons litter the broken floor. A far-off corner is packed with the type of white sacks that usually hold cement. The blue paint of the walls has faded to a pale shade. The plaster has peeled off in some places, exposing the old Lahori bricks underneath. Stacks of plywood rest idly.