Thanks for Visiting Mint
You seem to have an Ad Blocker on. Please turn it off in order to continue, or whitelist Mint
HOW TO TURN OFF AD BLOCKER
OR
REFRESH IF YOU ALREADY TURNED OFF THE AD BLOCKER
Home >Mint-lounge >The heirlooms in your closet

The heirlooms in your closet

The heirlooms in your closet

Growing up in a Gujarati household, I have seen the women of my family drape themselves in the choicest of Patola saris brought out for all religious ceremonies, festivals and weddings. I have one, passed down from my grandmother, which until recently lay wrapped away as an under-appreciated gift. A girl from the Toraja tribe from Indonesia standing beside a locally made silk-screen imitation of Indian trade cloth.

The exhibition will showcase over 70 types of textile pieces exported from India to South-East Asia and Europe for over 500-600 years, until the 19th century. The textiles, which were acquired in 2009 from American collector Roger Hollander’s private collection, will be seen publicly for the first time. “Gauri and I saw the collection a year and a half before acquisition and we were both flabbergasted that such a collection was still available," says Henkel. There are after all, he says, just half a dozen such collections around the world. “In the mid-17th century, an estimated 1.7 million textiles were being produced annually for trade. Today, though, only around 5,000 pieces made before the 19th century survive."

The collection has a strong focus on the South-East Asian markets. “It has pieces that are representative of every era and from every production centre. It is a very thoughtful collection. Roger (Hollander) picked pieces that were not just attractive—he collected with an academic eye," Henkel adds.

Apart from the heirloom Patolas, there will be block-printed cotton ceremonial cloths, some over 16ft wide, which were produced in Gujarat for Indonesian markets, where they were known locally as sarasa and ma’a cloths. One exceptional block-printed cotton piece features women holding parrots in one arm, in a style similar to that of Jain manuscript paintings. From the Coromandel Coast come the kain sembangis or skirt cloths produced for the Sumatran and Javanese markets, dodot skirt cloths for the Indonesian markets, and elaborate palampores for the European markets.

While the textiles promise to entice, the curatorial team has unearthed the stories behind their production, trade and use, and these are likely to be the most impressive aspect of the exhibition. 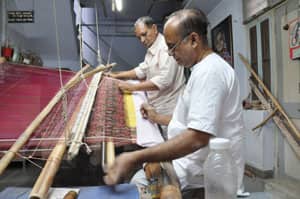 The Patola weavers of the Salvi family in Patan, Gujarat

The Salvi family of Patan, for instance, claim to be the only surviving “true" Patola weavers who use the elaborate double-Ikat technique. They claim to repeat certain patterns only once in 150 years. And the natural vegetable dyes they use—turmeric, marigold flowers, onion skin, pomegranate bark and indigo—don’t fade. The Salvis take four-six months to make a sari, which are priced between $3,000-8,000 (around ₹ 1.44-3.84 lakh).

The team also studied historic sites such as the Sidi Sayed mosque in Ahmedabad, the Rani ki Vav stepwell in Patan and the Sun Temple in Modhera. “The motifs on these architectural sites often matched those used on textiles," Henkel explains. Snippets from this documentary footage, as well as dye samples and tools, will be part of the immersive exhibition experience. The textiles have been dated using a dye-analysis technique that aids in carbon dating, revealing that the oldest piece in the collection was created in the mid-13th century.

The exhibition fits within the larger narrative of India’s centuries-old textile trade. South-East Asia had lots of spices, but only roughly woven bark cloth. India produced the best quality, most dye-fast, brightly coloured and tightly woven smooth cloth. This facilitated a robust cloth for spice trade. The earliest evidence of textile trade from India has been found in El Fostat, Egypt—the 9th-15th century pieces there resemble those found in Indonesia. This important connection shows that Indian cloth was being traded all over the world as early as the ninth century.

Their textures and colours still vivid, the textiles that are being prepared for display at the ACM betray their age and provenance. They illustrate an old Gujarati saying, “Padi Patole bhaat, phate pan fitey nahin (your Patola may tear but it will never fade)."

The exhibition will run from 12 November-1 April at the Asian Civilisations Museum, Singapore. The writer was a research assistant at the museum from February-June.