In the early 1980s, if you said “cupcake" in Chennai, guys would have assumed you were talking about a pretty girl, possibly a voluptuous one—like Helen, Jayamalini or Silk Smitha. As for cups, in my household, they were kept aside for servants who sipped their coffee rather than poured it down their throat without touching the lips using a davara-tumbler.

What’s new in Chennai dining, I ask fashion designer Venkat Nilakantan. “Why don’t you write about all the cupcake bakeries that are sprouting up all over Chennai?" he replies.

Toto, I don’t think we are in Chennai any more. Not my Chennai anyway; the city I knew as Madras. We ate cakes even then, except they were hard and had icing like fresh concrete. We stood in line at McRennett Bakery on Burkit Road in the heart of Thyagaraya Nagar, ignorant of the irony of buying cakes from a fake colonial shop in a street named after a Brit in the heart of traditional T Nagar.

Established in 1903 by the entrepreneurial Maanikkam Pillai, McRennett is as European as Sonia Gandhi is Indian. Pillai realized that he had a better chance of selling his baked goods to his colonial clientele if he had a shop with a pronounceable name. So he wrote down a few European-sounding names on chits and had a child choose one. The child picked McRennett. My brother and I bought their cakes either at the Thousand Lights branch or the Burkit Road one—named after a corporation commissioner in the heart of T Nagar, where we shopped at Nalli, Kumaran, and later, Sundari Silks. 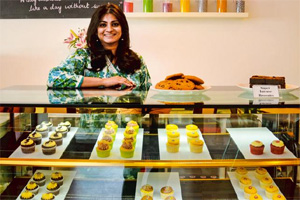 The old and the new coexist in Chennai today in a way that warms the cockles of its erstwhile inhabitants. Madrasis have turned cosmopolitan but still retain their mordant wit. A typical greeting when you attend a Chennai wedding and one that visiting non-resident Indians (NRIs) are unprepared for is: “How fat you’ve become", followed by a gentle pat on the beer belly that you—actually—don’t have.

Mathangi Srinivasamurthy, who runs Chamiers, a boutique and café, is emblematic of the new Chennai. She and her partner, Kiran Rao, also own Amethyst, a beloved Chennai boutique-cum-café. “Chennai people don’t forget their roots even if they add modern layers," Srinivasamurthy says. “For example, I can dance all night at Dublin to nonsensical rock music and do Vishnu Sahasranamam the next day."

The difference between Chennai and, say, a Mumbai is that Chennai doesn’t have too many stand-alone bars. When I ask Srinivasamurthy—who openly says that she is divorced and this isn’t taboo in the new Chennai—where she goes to dance, she lists Chipstead at the Taj Coromandel, and the bars at the Somerset and Hyatt Regency Chennai hotels. The only freestanding pub that makes her list is called—weirdly—10 Downing Street. Naming a chain of bars after a prime minister’s residence can happen only in India.

Most people point me to a Facebook page called Chennai Food Guide (CFG) when I ask them for dining suggestions in Chennai. Run by Mohamed Ali M. and Nishanth Radhakrishnan, CFG isn’t exactly unbiased but it comes close. When I asked for their 10 top picks for Chennai dining, CFG’s Ali sent me a list, but he also bcc’ed (blind carbon-copied) the restaurants that were on the list. I know this because several of the restaurants emailed Ali afterwards, thanking him for the inclusion, and asking if I needed more information.

Facebook foodie pages are potent ways to discuss, debate and recommend restaurants, recipes and ingredients. The key is to keep them transparent and egalitarian, something that foodies in Bangalore seems to have done, at least so far. Walking the tightrope between support and sponsorship is hugely difficult for all foodie sites, run as they are on a non-existent or shoestring budget.

So I call CFG’s Ali and have a half-hour chat with him. He wants to organize the world’s largest potluck in Chennai in 2013, and is looking for sponsors to fly the Guinness World Records people in to verify. They’ve organized a lot of events, including a barbeque inside a pool—with knee-deep water, it turns out.

So which are the best restaurants in Chennai? Silk List, an Internet group I belong to, often meets at Azulia, Cascade or 3 Kingdoms for decent food and good beer. Here are CFG’s not-entirely-unbiased recommendations for good food:

As for the cupcakes, there are plenty of choices, many of them made by homemakers. If you have time, you should ask the CFG to recommend homemakers who do customized cupcakes. If you are zipping in for a day without notice and are craving Chennai cupcakes, you would be best served by going to The Cupcake Company, Snowflake Cupcake or Cupcakes Amore in Adyar, where I grew up.

Shoba Narayan loves cupcakes—of the baked, and the big-screen kind. The best Tamil cupcake to her mind was not Silk Smitha but Jayamalini. Write to her at thegoodlife@livemint.com