Where are the fans?

Where are the fans?

The organizers got this bit right. The main act on the opening day of the Avantha Masters (16-19 February) featured John, Jeev and Jaidee, all three Js well-known names in the world of golf. I can’t remember the last time I felt a buzz at the prospect of walking with a group of golfers, as I did with this threesome. Consider what was on display here. John Daly, the psychedelic pants an extension of the way he plays the game and lives his life, Jeev Milkha Singh, who has outrun his father when it comes to golf, and the Asian Tour front-runner, Thongchai Jaidee. 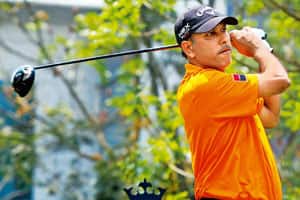 Just the audacity of the shot and the nonchalant way he went about it left witnesses wide-eyed. Talking of which, I actually counted the number of fellow spectators by the time we got to the eight. Give or take 15, I would say. Yes, 15!

Now, I would pay good money to watch these three play together. Entry to the Avantha Masters, as in all tournaments held in India, was free. I repeat, 15. Among them Milkha Singh, Jeev’s wife and her father, his sister and her friend, his old caddie from Chandigarh, and coach Amritinder Singh. Let’s put the pair of Japanese women in the Jeev camp since he’s been a regular on the Japan Tour for years and has a fan base there. Think of me on duty and that means not more than five made the effort to come out and watch Daly and Jaidee on a sun-drenched afternoon. A nation of all work and no play?

The popular version was that since Daly was going to play in Dubai, he was coaxed into flying a little further East, with travel and lodging thrown in by the sponsor. It didn’t go well from the start and the show was played out on Twitter. First, he moaned about the stacks of forms for an Indian visa. But we love our paperwork, Mr Daly, toilet paper being the exception. Next in line was the “five-star suite". He found the classification amusing. His response… “LMAO." So come the first round and despite the patches of brilliant strokeplay, the Florida resident shot a 79, complained of an elbow injury and headed for the airport.

Gurgaon is a corporate hub, and executives are taking to golf in droves. At least that’s what the mushrooming of golf tournaments exclusively dedicated to this category of golfers suggests. Given the incentive, I would have expected a few hundred officegoers to call in sick on the Thursday. Or put in a casual leave application the day before. Come on, that was the first (and in all probability the last time) you would see John Daly play in your backyard.

Was live TV at fault? Golf fans opting for the office chair or the couch rather than braving a beautiful day in the second half of February? But then almost all international events are now beamed live and that has little impact on galleries.

Let’s just take some of the other biggies in our neighbourhood. The Maybank Malaysian Open next month or the Barclays Singapore Open and the Hong Kong Open towards the end of the year have thousands streaming through the gates from Day 1. Besides the massive build-up to these events, could the quality of the field also play a part?

I think, yes. Take out the Indians, and the star draw at the third Avantha Masters was a reluctant American. The Malaysian Open is going to see about half-a-dozen top-of-the line names from the European Tour, among them recent world No.1 Martin Kaymer, Masters champion Charl Schwartzel, 2010 British Open winner Louis Oosthuizen and the exciting Spaniard Álvaro Quirós.

Led by Jeev, what Avantha did have this time around was a strong Indian presence. While Jyoti Randhawa sat out with a skiing injury, there was Shiv Kapur, Gaganjeet Bhullar, Anirban Lahiri, Himmat Rai and S.S.P. Chowrasia. All winners on the Asian Tour. What didn’t help was the poor showing by the home team. The best-placed Indian was the understated Delhi boy Shamim Khan in 22nd place, followed by Lahiri, who shared the 23rd spot.

So if events like this one are aimed at promoting and popularizing golf in the country, are they really doing that? “Till as recently as five years ago, nobody would have thought that the European Tour would come to India. It’s a start and the event showcases what we have to offer. Cricket has taken decades to be where it is now. I feel golf will get there. We just need to be patient," says Kapur.