Caution: Elephant Zone. Do Not Stop. We shall not be responsible for attacks by elephants," a signpost on National Highway 212 warns motorists. That sign encapsulates how far the Bandipur National Park has come since its conception, and how its fortunes have changed. Through the 18th and 19th centuries, Bandipur was a hunting ground for the maharajas of Mysore. Here, the kings and their guests would indulge in good ol’ shikaar, in pursuit of hunting trophies to display in their dining halls.

Today, things are different. Since Bandipur became a protected area under Project Tiger in 1973, tourists can move only within an earmarked zone, where they can go on guided safaris. The only shooting that now happens is with cameras (without flash, at that). Beyond this small zone, the vast jungle belongs to the animals.

Soon, I’m sitting in an open Jeep with six other tourists, a guide and our driver. As we venture into the forest, we’re greeted by grazing deer, scampering mongoose (both common and stripe necked), langurs scratching themselves, a herd of sambars (deer) strolling and massive gaurs munching grass. And then there are the birds—the Indian Blue Jay, jungle fowl, Indian Kingfisher, the Honey Buzzard, owls, vultures and eagles, all colourful and chatty. But while we see fresh pugmarks, we spot no tigers; no elephants either.

On the way back, we pass an abandoned shack. Unlike the other concrete structures that we infrequently see sprinkled across the forest, this one wears no signs of human life. There are no motorbikes leaning against the wall, no goats tethered to the gate, no clothes drying from lines.

This, our guide Nataraj tells me, is an abandoned STF (Special Task Force) outpost. The STF was a security force that was set up in the 1990s to capture the dacoit-smuggler Veerappan, who operated out of this forest range, smuggling sandalwood and ivory. In October 2004, 14 years after the STF began a manhunt, Veerappan and a couple of his associates were shot and killed by STF forces.

My curiosity is piqued. I’ll be the first to admit—I would never have made this journey if the moustachioed dacoit was still roaming these jungles, shooting elephants and kidnapping people. Don’t get me wrong, I am all for adventure; I just don’t want my travels to get too adventurous.

Koose Muniswamy Veerappan grew up in the nearby forests, says Poovappa, our resort manager. Veerappan was born in a small settlement on the Karnataka-Tamil Nadu border. Some stories put him as young as 10 years old when he killed his first elephant for ivory. As his notoriety (and his police chargesheet) grew, so did the scale of his operations. He began smuggling ivory and sandalwood from these jungles for international trade. He resorted to abduction and killings to eliminate competitors, informers and police officers who threatened his operations. His gang grew bigger and better armed.

At the height of his power in the 1990s, Veerappan’s territory included all of the Nilgiri Biosphere, a 6,000 sq. km area covering river systems, ravines, peaks and thick forests between Tamil Nadu, Karnataka and Kerala. The STF and the police scoured the jungles for him in vain. Veerappan knew every nook and cranny of these jungles—the moment he got wind of the STF’s proximity, he could make his escape by trails, paths or caves that STF teams had no clue even existed.

One day in 1997, as the first canter of the Bandipur morning safari entered the forest, the tourists noticed boulders blocking the narrow path. When the guide stepped out to clear the obstacles, Veerappan and his men stepped out—and whisked away the guide and tourists, in addition to two conservationists who were working in the jungle.

Veerappan was looking for foreign nationals or forest officials to hold as bargaining chips against the government in his demands for clemency. Since the tourists turned out to be neither, they were released unharmed a few hours later; the conservationists were let off after 14 days.

Three years later, the Kannada actor Rajkumar was watching TV in his farmhouse near Bandipur, when Veerappan’s men came and knocked on his door. The next morning, Rajkumar’s fans across Karnataka woke up to the news that their hero had been kidnapped. The police and STF forces combed the forests in wake of the abduction but found no trace of the actor or the dacoit. An entire state held its collective breath as Veerappan kept Rajkumar in his jungle hideout for 108 days before finally releasing him.

These and other exploits of Veerappan are bullet points Bandipur would rather not have in its tourist brochures. 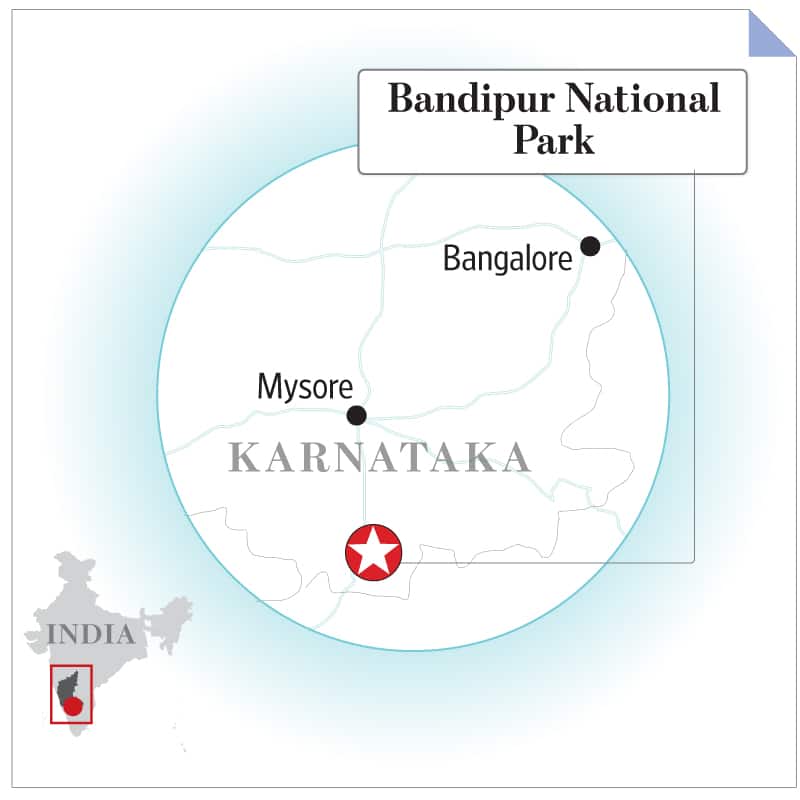 Last year’s poor rainfall forced thirsty animals to migrate to Kerala. Elephants are few and far between, Nataraj says. But as we pull alongside the salt pit, Nataraj puts his finger to his lips. He sets up his department-issued camera and waits. Suddenly, four elephants emerge from the tree cover and walk toward the pit. They spoon up the mud (with the salt in it) in their trunks—and rub it over their bodies. “Our elephants are finally returning home," Nataraj grins.

My third (and last) safari into the jungle is my last chance to see a tiger. We bump over the narrow trail, and as trees fan out their leaves into a canopy above us, the driver slows the jeep to a crawl. “There," Nataraj calls out softly, pointing to a mess of bamboo and branch. It takes a minute for me to spot it. It’s not a tiger. But hidden under thick foliage is the carcass of a massive Indian Bison. It is lying in a puddle of blood—and covered by red gashes—the kill marks are fresh.

“It’s a tiger kill," Nataraj confirms. “The tiger is close; it will never leave its prey unguarded, but the tiger will not step out to claim the kill in front an audience." Still we pull over and wait, but to no avail. “Let’s carry on. We’ll come back on our way out," Nataraj suggests. Two hours later we return along the same route. And sure enough, a big chunk of the gaur is missing. The tiger, alas, is still nowhere to be seen. Such is jungle luck.

Bandipur Safari Lodge, a Jungle Lodges and Resorts property, charges 5,000 for single occupancy, per night, inclusive of all meals and safaris (including forest entry and camera fees). For details, visit www.bandipursafarilodge.com. You can also book safaris directly at www.bandipurtigerreserve.in for 300 per head. Only forest department vehicles and approved resort vehicles are allowed on the safari routes. You need to book your safari in advance with the forest department

There are a few restaurants along the highways leading into and out of the park. For safaris, the resort can provide packed vegetarian and non-vegetarian food if need be.

Neha Puntambekar is a freelance writer based in Mumbai.