Behind every successful man...

Behind every successful man...

It’s been 25 years since designers Abu Jani and Sandeep Khosla began dressing the rich and famous. They are credited with making weaves like Tanchoi and Jamavar fashionable, reinventing Zardozi, and making austere Chikan glamorous. A passion for chiffon, tulle, silks and organza ensured they avoided synthetic fabrics. 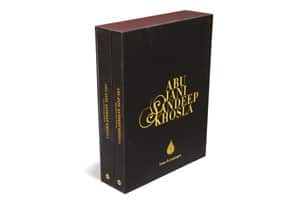 The volume on fashion traces Jani and Khosla’s journey from the time they met, the opening of their first boutique, Mata Hari (Juhu, 1986), to exhibiting their work at Sotheby’s, London, for three days next month. This book showcases their collections through the years with a series of specially shot photographs (which unfortunately are not captioned well). It also acknowledges the role some powerful women have played in their career.

Among them is Jaya Bachchan, who became the lady in white, constantly appearing in Abu-Sandeep Chikan or Khadi ensembles. For many years the first piece of every new collection was worn by Jaya; the entire Bachchan clan, including Shweta Nanda’s daughter Navya Naveli, has been dressed by them for different occasions.

And it’s not just three generations of Bachchans who have embraced their label. Nita Ambani, a patron from the start, requested the duo to arrange a private fashion show on Kokilaben Ambani’s 75th birthday in 2009 and the label is worn by three generations of Ambanis as well, including Nita and Mukesh’s daughter Isha, who posed for pictures for the book along with her mother.

The cover note for the First Ladies section has been written by Usha Mittal (Lakshmi Mittal’s wife), who indicates that she has been wearing the label for 15 years now and counted on Khosla and Jani to create stunning ensembles for her daughter Vanisha’s and son Aditya’s weddings.

The interiors book covers the various homes, hotels and weddings that Jani and Khosla have designed.

We picked portraits of mothers and daughters whom Jani and Khosla have been dressing over the years. “All three shoots happened on the same day at our studio in Mumbai. It started at noon and finished at 12 at night. Everyone was exchanging so many stories. It was a lot of fun," says Khosla in a phone interview from Mumbai. He gives an insight into the styles of the three divas and their daughters featured in their book. Edited excerpts from an interview:

As for Rinke and Twinkle, we’ve seen them grow from awkward teenagers into women of style. In the photograph, they are wearing multicoloured brocades, on Benarasi silk. These two saris were a one-off that never even reached the market.