Home >Mint-lounge >Business-of-life >Who will make a difference in the Ashes?

Who will make a difference in the Ashes?

The world's oldest Test rivalry is back. Here are ten men who could decide which way the series go

The first Ashes Test in the 2013 series has already begun, and even though the build-up to Test cricket’s most marquee event has focused on Australia’s weak (relatively) and inexperienced squad, few can doubt the dogged fighting qualities of Michael Clarke’s men. Australia’s batting and bowling have both come under the scanner. The absence of a generation of players who forged a legendary, often unbeatable team—Ricky Ponting, Glenn McGrath, Adam Gilchrist, Michael Hussey, Matthew Hayden, Brett Lee—is still acutely felt. Of the 16 players who made the Australian team when they last won the Ashes in 2006-07, only two remain in the current squad, Clarke and Shane Watson.

The runs from Australian bats have dried up—there was only one century from the entire line-up during Australia’s Test tour of India in February and March (the visitors were beaten 4-0). Australian batsmen have scored only 10 Test centuries since June 2012, four of them by Clarke and three by the retired Hussey.

As a result, Australia’s batting line-up is far from settled.

England’s, on the other hand, could not be more steady. Their big change, promoting the phenomenally talented Joe Root to open with captain Alastair Cook instead of Nick Compton, would be any coach’s envy. To put that into context, Compton and Cook’s opening partnership, an average of 57.93 runs in 17 innings with three century stands, is one of the best England has ever had in Tests.

Australia will seek inspiration from the last Ashes series where they were firm underdogs. In 1989, they came in to play on the back of two consecutive Ashes series defeats, and were widely expected to capitulate. They won 4-0.

Australia’s vice-captain Brad Haddin played up the unpredictable nature of the team.

“One thing we have in our favour is you just don’t know what some of these guys are capable of on the international stage," Haddin told AFP. “We’ve got a lot of talent in that room and some very, very exciting cricketers. It’s going to be exciting to see them unleashed in the biggest series of all."

England, of course, have been on a golden sporting streak—Andy Murray just won Wimbledon, the first British man to do so in 77 years, the British and Irish Lions won their first Rugby Union series in 16 years when they beat Australia in Sydney, on Saturday. The Ashes, for the third series in a row, seem naturally theirs for the taking. But players know that on the field, situations change with no warning. 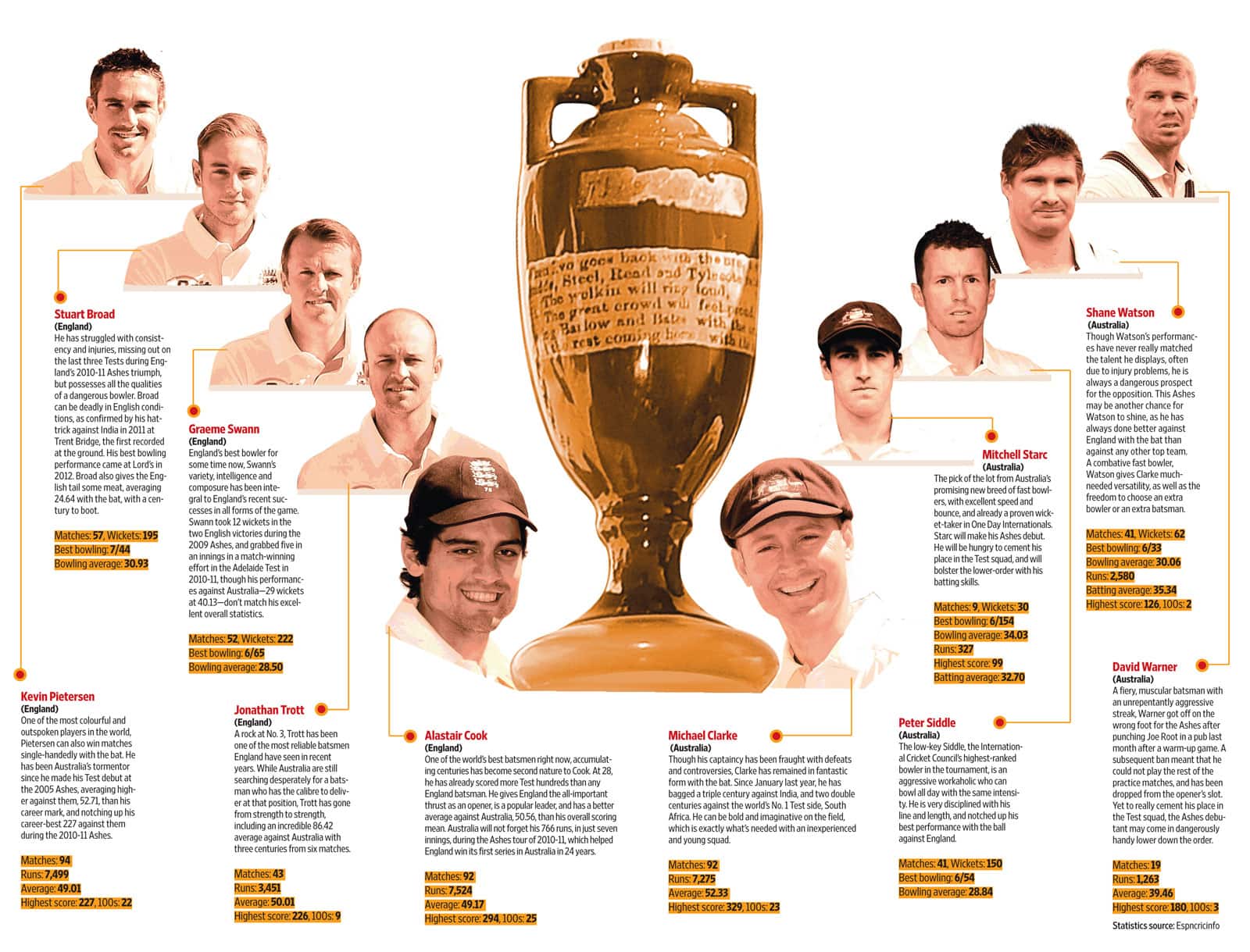 Here’s a look at the players, from both camps, to watch out for. Players whose performances (or the lack of), will play a crucial role in shaping this year’s series.