The gifted Spanish director-writer duo Alejandro González Iñárritu and Guillermo Arriaga have a small but outstanding oeuvre—the myth-shattering, multiple-story film Amores Perros being their finest. Director Iñárritu’s last film Babel was not his best—an example of how his knack for sentimentality and the almost religious idea of pre-ordained destiny, when executed cinematically, can go wrong. 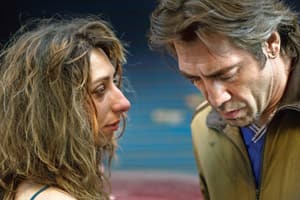 He directs and writes his new film Biutiful (the deliberately misspelt title derived from an incident in the film) without Arriaga, and unlike his earlier films, he sticks to a linear, chronological story about a man precariously balancing metastatic cancer, working in deplorable conditions with illegal immigrants, struggling to feed his two children, and learning to accept and forgive his unstable wife.

Like all of Iñárritu’s movies, an almost religious and sentimental idea of destiny propels the film and its characters. There are no complex ideas or in-between realities in Biutiful. The protagonist, Uxbal (Javier Bardem), is trying hard to be a decent, responsible man, even though he is a petty drug lord and dubiously makes money by being a “messenger for the dead". The real flight of the film is its vibrant and electric visual treatment and the central performance by Bardem, the most gifted Spanish actor of his time.

The film opens with a dream-like sequence in a haunting, snowy landscape. Bardem is seen following a mysterious stranger—it circles back to the same sequence later. Then it moves to seedy Barcelona, the city’s margins where poverty and violence are intertwined—nothing like the Barcelona from Woody Allen’s Vicky Christina Barcelona. Early on in the film, Uxbal is diagnosed with terminal cancer of the prostate. We see his urine streaming with blood and his body shrink, but he has to go on. His mistakes lead to the death of immigrants in a sweatshop, adding to his misery. His wife’s loss of nerve exacerbates the angst of his children and the family begins to tear apart. Uxbal desperately tries to make amends to make the last days of his life redemptive.

The relentless downward curve of the character’s fate could have been tedious if not for Iñárritu’s remarkable craft of making his visuals so subsuming and intimate—and therefore urgently beautiful—that you have to give in. Rodrigo Prieto, the film cinematographer, who has also filmed all of Iñárritu’s other films, uses a dim and blue tone, and has ingeniously used hand-held camera movements to portray Barcelona and its doomed in a way you have never seen before.

Iñárritu, unlike Arriaga, is not a writer concerned with the intricacies of a story’s structure. He writes the screenplay in a way that enhances its visual force. Almost every scene has Uxbal in the frame and pulls you further into his broken soul. Some scenes are unforgettable, including one towards the end of an enormous, throbbing nightclub with shockingly stylized dancers and dizzying psychedelia. Ghostly figures hanging on walls sometimes habitate Uxbal’s surroundings—the surroundings of a man teetering on the brink of extreme pain and fatigue.

But the reason Biutiful must not be missed is its lead actor. Bardem’s role is a brilliant example of immersive acting. As Uxbal’s disease progresses, we see Bardem’s muscular physicality droop. Throughout the film, Bardem pulls off a character who is strong and fragile at the same time. His talent as an actor shines unequivocally in every scene.

Watch Biutiful for Bardem and its visual audacity—both can leave you breathless.

Director Sudhir Mishra’s new film, Yeh Saali Zindagi, is a long, haphazard hodgepodge of interconnected narratives which suffers sorely because of an overdose of calculated edginess. Mishra is known for his realistic idiom, consummated in films such as Dharavi and later, Hazaaron Khwaishein Aisi. Mishra has also written this film, the screenplay infused with a wicked sense of humour. The story has believable, engaging characters and some good acting. 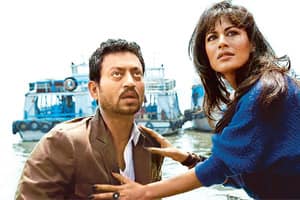 But while the film has a long running time, expanded in short, intense bursts of action, the screenplay seems to have been completed in a hurry. The three strands of the story, involving characters whose lives intersect in unsuspecting ways, do not manage to distil a central idea or theme in the film. Mishra uses the convenient tool of marking out changes of locations in words—facilitated by the incoherent screenplay.

Arun (Irrfan Khan) is in a dubious business, fuelled by illegal money, with a corrupt real estate man Mehta (Saurabh Shukla). He is in love with Priti (Chitrangda Singh), who is in love with Shyam (Vipul Gupta), the son of a politician. In a parallel track, we meet Kuldeep (Arunoday Singh) in jail. He works for a network of crooks comprising cops, smugglers and extortionists. His wife Shanti (Aditi Rao Hydari) abhors him for having chosen a criminal path over her and their child, but is still irresistibly attracted to him. Many kidnappings, gunshots and coups ensue, bringing all the characters together. But so much happens and with such thoughtless force, that none of the stories get their due. Yeh Saali Zindagi finally appears to be three films forced into one without narrative clarity.

The film’s only real redemptive aspect is its brilliant cast of actors. Khan, Chitrangda (for whom it is a dream return), Arunoday, Sushant Singh, Yashpal Sharma, Prashant Narayanan and Hydari carry the film on their performances. They are all driven by their roles, which means it is a script whose parts are bigger than its sum.

The other star of the film is the dialogue—brimming with wit and bravado. Elements of the absurd dot the plot. A superb cameo by Narayanan, of a cross-dressing fashion designer living in Russia, for example, is imagined better than it is executed. Overall, Mishra tries too hard to be on the edge. In the process, he loses control of the story.

Biutiful and Yeh Saali Zindagi released in theatres on Friday.