‘I still get free auto rides’

On 24 June, over 50,000 people will watch singer Raghu Dixit and his band take over the prestigious John Peel stage at the Glastonbury music festival in the UK, playing an hour-long set of Kannada and Hindi folk songs.

The Bharatanatyam-trained former microbiologist’s band, the Raghu Dixit Project, has become one of Indian indie music’s biggest crossover success stories. Their self-titled 2008 debut album has topped the iTunes World Music charts twice in the last year, and they played more than 60 international shows in five countries in 2010. “Glastonbury is going to be huge. It’s going to be madness," Dixit told Lounge over the phone from Bangalore. “It’s like a Carnatic musician performing inside the Tirupati Balaji temple. The ultimate pilgrimage." He talks about cracking the UK market and the advantages of being a household name in Karnataka. Edited excerpts from an interview:

It’s been a fantastic year for you. What made it all happen? 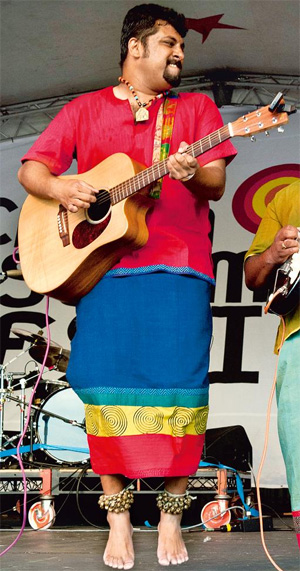 Here we got lucky, and we were booked for the Womad (World of Music, Arts and Dance) Festival (in the UK) a week later because another band had dropped out. We had nearly 10,000 people there and it really reaffirmed our faith in our music, and we began to feel that we could try becoming international performers.

The real turning point was playing on the popular BBC music show ‘Later...with Jools Holland’ in late 2010. How did that happen?

We have two managers in the UK, and the two of them came up with a full-length, three-phase tour of the UK in 2010. We played a number of events there for folks from the music industry in May and, as a result, gained a number of evangelists for the band. One of the people who came for the May showcase gigs was a producer for Later...with Jools Holland.

How did the show help?

We played the season finale, along with Arcade Fire and Robert Plant (Led Zeppelin). It’s so hard for me to say that we played “along with" names like that.

That show went out to millions of people. When it aired, I was sitting here in India, in the middle of the night, watching our site and Facebook page go crazy. It pushed the album to No. 1 almost overnight. No Man, the song we performed on the show, was top of the charts for that week.

How will your second album differ from the first?

The first album was recorded over a period of seven years, and in very piecemeal manner...you can hear many inconsistencies in the tonal quality. The second will be well-prepared, well-studied and will hopefully take the reputation of the first album to a higher level. It will also feature more languages than just the Kannada and Hindi of the first.

You’re also working on the music for a Bollywood film.

In 2007, I did the music for this Kannada film, Psycho, which made me a household name in Karnataka thanks to one song called Mahadeshwara. That song went to every nook and corner of the state, and to this day I get free auto rides, free lunches at restaurants and waivers from bribes at government offices because people recognize me.

In 2009, I did another movie called Just Maat Maathalli. After that, I got contacted by Y-Films, part of Yash Raj Films, asking, “Would I be interested in a Bollywood film?" I said, “Of course!" The film had Ashish Patil as producer, and he used to head MTV India back in the day. I remembered us playing several free shows for MTV all those years ago, so this felt like him saying, “Here’s your payment for that!"

The film is called ‘Mujhse Friendship...’?

You recorded a session for the Indian edition of Coke Studio recently. Tell us about that.

It was fantastic, but we were really disappointed that we got to play only one song. We chose Hey Bhagwan. We were part of a session that included Bombay Jayashri, Ustad Rashid Khan and playback singer Richa Sharma. Sadly, and unlike the Pakistani Coke Studio, we didn’t get to collaborate with these artistes. But we’re excited, and this opens up a whole new audience for us.