The art of slowing down

Gauri Gill on why she mistrusts quick work, and collaborating with Warli painter Rajesh Vangad to expand the limits of the photograph

I cannot make photographs in an innocent way," says Gauri Gill, 45. We are meeting for a second time at Café Turtle, near her Nizamuddin East studio in New Delhi. And the conversation has returned to her antecedents as a trained photographer—she has a bachelor’s in photography from the Parsons School of Design, New York, and a master’s in fine arts from Stanford University, California, where she was the only photographer in her class.

Partly because of her training, Gill is conscious of the photographers who have gone before her, and she cannot exhibit a picture without the weight of that history. For example, all through her bachelor’s in the US, from 1992-94, and then during her master’s from 2000-02, she shot images of Indian-Americans. These were people she met all the time in the US, yet there was no trace of them in her classroom or on the walls of the museums she visited.

“Later, while editing the work, I decided to position it as a conversation with Robert Frank’s seminal work The Americans.... He had his version of the Americans, and these are mine," she says.

As a cue to viewers, Gill also called her own series The Americans. The show opened at Bose Pacia in Kolkata in 2008. It was her first show. She was 38 at the time. Till then, the photos had been sitting in boxes. “I mistrust quick work," she says. “I like to let the photos sit. You may think one day that you have done this genius thing. But when you see the photo over a period of time, sometimes that feeling passes and only sometimes it holds."

Digital photography and social media have made it possible to instantly shoot and share pictures. They are quickly consumed and often quickly forgotten. They are, in a way, a foil to Gill’s photographic practice, where she deliberates on everything, from the photo-historical context of a picture to whether to print it on glass or archival paper. Gill still uses analogue cameras and prints many of her photos using the old, more expensive and much slower silver gelatin process.

This kind of unhurried commitment to a subject is an important part of what makes Gill’s photographs art objects, says gallerist Peter Nagy. “The digital photographic revolution has made everyone a photographer now," Nagy says. “What we want is for professional photographers to take us to a place that we will never go to in our lives and learn things that otherwise we wouldn’t learn. And that’s exactly what Gauri did with her desert pictures (Notes From The Desert). She got under the skin of nomadic communities (including Jogi nomads, Muslim migrants and Bishnoi peasants) in western Rajasthan precisely because she gave it so much time. If you know Diane Arbus, the famous American photographer, she was able to shoot people because of getting into these people’s lives. A lot of Dayanita’s (Dayanita Singh’s) portraits took a very long time, but she gave it that time to get to know people so that they felt comfortable with her taking their pictures." Notes From The Desert is in some ways Gill’s magnum opus. She has been going back to the same places in Rajasthan—Lunkaransar in Bikaner, Barmer, and Osiyan in Jodhpur—since 1999, to meet mainly the same people, often without an agenda. For a year after her master’s, she lived for the most part in Rajasthan. Later, she taught photography at the American School in New Delhi from August 2003 to December 2008, and every chance she got—weekends, long holidays—she went back to meet friends: Izmat, Nyala, Urma and others who are still part of her life. “The first time I visited Izmat’s village, looking for the local school, I was completely lost. Her daughter Jannat started crying because she thought I was a boy with my short hair and jeans and kurta. They didn’t know what to make of me," Gill recalls.

When Nagy first saw Gill’s “desert pictures", as he calls them, she had been photographing within the communities in Rajasthan for nine years. Nagy thought the pictures were ready to show. Gill, however, wanted more time. She wouldn’t show the photos for two more years. “I need to do my very best to try and answer my own questions before I can share the work. I also have a responsibility when representing real people, I have to try to get it right," Gill explains as she sips her second cup of Americano.

Indeed, a two-way exchange of access and power stands out in Gill’s desert pictures. Her friends—and they are friends now after 17 years of staying with them for days and weeks at a time and participating in life events from birth and death to the illness of a child—in western Rajasthan have given her unfettered access to their lives. The Birth Series of eight photographs, also part of the ongoing Notes From The Desert series, where Gill captures a midwife delivering her granddaughter, for example, would not have been possible if the photographer did not have the complete trust of the family.

And while her subjects have invited Gill into their lives, Gill too has invested in making it a relationship of equals. This is perhaps most obvious in the Balika Mela series shot in 2003 and 2010, in which Gill invited the subjects to choose how they wanted to be represented. The series comprises pictures Gill took in a makeshift studio she set up at a fair organized by non-governmental organization Urmul Setu Sansthan in Rajasthan.

“The set-up was quite rudimentary. I bought cloth from the local cloth shop to make my own backdrops, and there was a vase with some flowers, a chair and a small mirror borrowed from the local photo studio," she says. “In 2003, many of these village girls had not been photographed before. No one had a mobile phone. Then this amazing thing happened. They started to decide who they wanted to be photographed with and how, and the pictures became collaborative. The girls came up with their own completely original gestures. Like the three girls who stood shoulder-to-shoulder blessing the camera. They might have seen something like that in a religious calendar; I did not ask. Or the Jogi friends who sat on the chairs with the flowers between them with the supreme confidence of maharanis (queens)."

Nathaniel M. Stein, curator of Picture This: Contemporary Photography And India, an ongoing exhibition of works by Gill and three other photographers at the Philadelphia Museum of Art, US, says one of his favourite pictures in the Balika Mela series is of two girls, Madhu and Rampyari, posing with a camera. “In addition to the beauty of their gestures and gazes, I am always moved by the girls’ choice to be photographed with one of Gill’s cameras. The choice to hold a camera is so poignant given photography’s chequered history in terms of representing marginalized social groups. It also says a lot about how meaningful Gill’s presence is in this place and in their lives," he says on email. 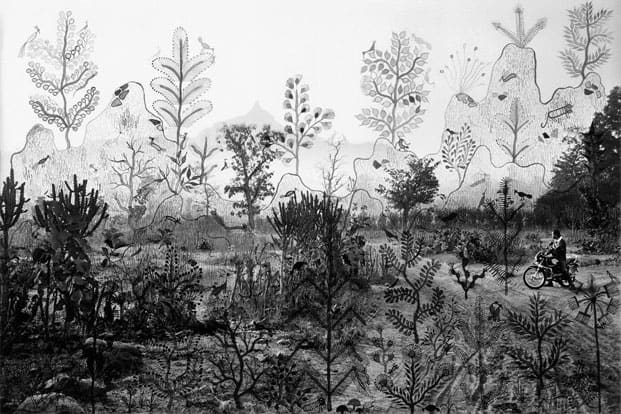 While working with the strengths and limitations of her medium, photography, Gill also creates multiple layers of meaning with the addition of text and, most recently, drawing to her pictures. Gill’s latest body of work, Fields Of Sight, is a collaborative work with Warli painter Rajesh Vangad. Shot in Vangad’s hometown in Ganjad, Maharashtra, the pictures literally and figuratively acquire new layers as Vangad paints in monochromatic greys on top of the black and white pictures. “As I photographed the landscape, Rajesh was simultaneously telling me all these stories of how things were before, including when he was growing up," says Gill. Unwilling to throw up her hands and accept that the photograph can typically capture the landscape and the people as they are now, Gill, along with Vangad, set out to find ways to expand the toolbox of meaning-making. They came up with the idea of Fields Of Sight as a series of photo-paintings.

Fields Of Sight has just been completed and will likely be shown later this year. Even as we talk at the café, Gill opens up the images from the series on her MacBook. She juxtaposes three drawn-over photographs. They tell the story of migration from the village to the city, of paths in the air made by cellphone signals, and how ants live and are revered by Adivasis. “Only this morning I thought about showing these three photos together. Sometimes I look at the photographs and then put them away. Sometimes I can see them from the corner of my eye at home or in the studio. I try placing them in different combinations, just to see how I can tell the story," she explains. “It’s a long process."