New kids on the block

New kids on the block

In the opening match of the 2010-11 I-League season on 3 December, India’s top football division, Chirag United, faced a debutant team on its home ground in Kolkata, the cavernous Yuva Bharati Krirangan. A look at the line-ups of the two teams would have been enough to mark this match out as special.

Chirag United is a team of seasoned veterans, foreign recruits and a smattering of young talent that has gone through the grind of years of division-level football to earn a place in the I-League. Their opponents AIFF XI, the All India Football Federation (AIFF) team that will be known as Indian Arrows from 1 February, had an average age of 19, no foreigners (the top six scorers in this I-League season are foreigners) and the 11 players that took the field had a cumulative experience of roughly five matches played in any kind of national league.

Chirag United were effectively facing a bunch of schoolboys, and when the Kolkata team scored in the third minute, spectators would have been forgiven for thinking that this was going to be a one-sided affair.

But after the initial jitters of playing their first match in the big league, AIFF XI quickly put their training into practice, playing a fast-paced game in the midfield and defending in tight formation without any show of nerves. They lost the match 1-2, but it was a debut worth remembering for India’s latest experiment in developing football.

Clubbing youth development with qualification ambitions for the 2018 World Cup, the AIFF last year decided to form a team of its own, made up of the country’s best under-23 footballers, and give it direct entry to the I-League. The idea is to give future national squad hopefuls the most competitive exposure they can get. It was a bold move, endorsed and promoted by India’s national football coach Bob Houghton, but it left the I-League clubs seething.

Direct entry into a country’s top league would be a contentious decision anywhere in the world, but the clubs had another major grouse—the young drafts they had signed on for the 2010-11 season were culled away from their squads by the AIFF. 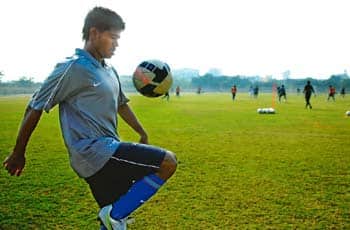 Young talent: Abhishek Das, now an AIFF XI right back, has no regrets about leaving the East Bengal club.

“Of course, the clubs were a bit annoyed," says Delhi-based football commentator and analyst Novy Kapadia. “The AIFF hastily moved in and grabbed the young players after the clubs had already spent time and money to scout for them and sign them."

Das, who has played for every national age group side starting from India U-13, and made the leap to the big stage playing for the India U-23 team at the 2010 Asian Games in China, has no regrets about leaving East Bengal.

“This is a fantastic idea," Das says. “East Bengal is a team full of stars and I would never have made the first team and got the kind of match experience I’m getting now. They would have put me on for 10-15 minutes in a couple of matches, the standard practice for youngsters, and here I get to play just about every match."

The players for AIFF XI were signed on a four-year contract, and though the values of these contracts have not been disclosed, AIFF XI manager Eric Benny says “they are at par with market rates".

I-League clubs have long been accused of failing to nurture young talent, and for not having the structural base to give it the kind of developmental push needed. An Asian Football Confederation (AFC) crew, in India to inspect whether the 14 I-League clubs fulfilled the AFC criteria for professional licences, slammed their lack of youth development programmes in October. In action: Coach Desmond Bulpin with the AIFF XI team at a practice session

Young players who fail to make an immediate impact at big clubs are often reduced to journeymen—switching clubs every season to try and get some first team action.

“It is probably Indian football’s biggest problem," Kapadia says. “Teenage talent withers away in the big club environment." Kapadia rattles off a long list of examples—star Tata Football Academy (TFA) graduates such as Sheikh Sanjeeb or Kaustav Ghosh, who hovered around the Kolkata clubs but did not last in the big league. Shylo Malsawmtluanga, who joined East Bengal in 1999 at the age of 15, and was widely hailed as Indian football’s next big thing, faded away after three-four seasons.

On an overcast and cold December day at the Tau Devi Lal stadium in Gurgaon, the boys from AIFF XI are slugging it out at a practice session. Bulpin stands tall in the middle of the field, inscrutable behind oversized dark glasses, shouting praise and encouragement for every intelligent pass, crisp finish and good tackling.

After a practice match, the squad heads to the obstacle course set by conditioning coach Narayan Menon—brightly coloured cones, mini hurdles, rope ladders and rubber obstacle sticks stuck to the ground in close groupings for players to weave through. Menon makes the players run through the obstacle course at a furious pace, setting them different footwork and running patterns after every set. Post-training, it’s lunch at the common dining area in the plushly furnished apartment building in Gurgaon where the team stays. The building is also equipped with a large dining room, an office and a weight-training and strategy room. The players have the use of a fully equipped gym and swimming pool at a posh fitness club in Gurgaon.

In winter, when the unheated pool is closed for swimming for other members, the AIFF XI squad treats it like an oversized ice bath, an essential element in muscle recovery and injury prevention after hard training sessions and matches. Even the national team finds it hard to get one when training or playing in India.

Bulpin, who was the youth team coach at the English Premier League side Tottenham Hotspur (England strikers Peter Crouch and Jermain Defoe came through the system under him), and also managed English championship side Queens Park Rangers, works in close consultation with Menon, former India goalkeeper Tanmoy Bose (the goalkeeping coach), a dedicated masseuse, a physiotherapist and a kit boy “who works hard" to manage the 28 players in his squad. The search is on for an assistant coach as well.

“Many boys find it difficult to adjust to the kind of disciplined structure we have put in place," Menon says. “But these are international norms. We have stopped all sugar, sweets, ice cream. There was great resistance when we shifted dinner time from 9pm to 8, and now 7.30. The boys are in the transition phase, from teenagers to adulthood, from amateur to professional athletes, so they will take some time to adapt to the professional athletes’ life, where every little thing is monitored."

Jeje Lalpekhlua, 19, a prodigiously talented striker from Mizoram, says it’s this discipline and infrastructure that makes being part of the AIFF XI a “fantastic experience".

Tactically, it also makes sense to keep a coeval group together for a prolonged period, giving them the chance to develop into a unit that is in perfect sync. Ten of the 28 members of the AIFF XI have also trained together for a few years at India’s under-16 development programme, run by another British coach, Colin Toal. An attempt to ensure India’s struggling football environment does not lose its young talent through the myriad slips and cracks in the system.

AIFF XI have had mixed results so far in the I-League, winning two, drawing two and losing six games. Goan club Salgaocar FC’s Moroccan coach Karim Bencherifa questions the effect of pitting young Indian players against the top clubs and players in the country. “This move helps players with match fitness, it develops their skill, makes them tactically more aware," Bencherifa says. “But equally important is the mental aspect. Already the team has conceded 22 goals in nine matches, and if they lose a lot of matches by four, five, six goals, and their strikers don’t score, it can harm the motivation and confidence of the players."

This thought is not lost on the AIFF XI’s management, which drills it into the boys that they are here for experience, and part of that is learning to lose.

“We want to win, and we play to win," says Bulpin. “But if you are obsessed with winning, you won’t get results. You have to think of the development of the team, and its performance."

A lot of work goes into ensuring the squad does not feel the pressure that comes with playing top league football. “We look at it this way," says Das. “We have nothing to lose, we are a team of young boys looking for exposure. So the pressure is on our opponents. All we have to do is show that we can survive in this league, that we belong here."

Bulpin is confident his team will not only stay in the league, but will finish in the top 10.