My late friend Omar Kureishi (whose crusty voice on radio brought Pakistan cricket alive for millions of followers from the 1950s till his death in 2005) had a simple solution for the subcontinent’s most vexing issue. “Keep the ruddy politicians out, and cricket will keep the people of India and Pakistan together."

This came shortly after the Karachi one-day match had been disrupted by young men who had run on to the field and assaulted India captain Krishnamachari Srikkanth, ostensibly to advocate the “Kashmir cause". Like a quintessential cricket romantic, Omar, despite his privileged education and understanding of realpolitik, could be reduced to utter dismay at the volatility of Indo-Pak relations, in which cricket would often become the first casualty.

“In 1961-62," he related to me, after the Karachi incident, “Hanif Mohammad had his hand slashed by a ruffian’s blade. Why would anybody want to deprive millions of people from watching a master like Hanif, or a young prodigy like Tendulkar (who was making his international debut then) play unless they have been weaned on prejudice?" Gentleman’s game: The Indian and Pakistani teams after the fifth ODI in Lahore on 24 March 2004. Arko Datta / Reuters

Indeed, the burden of Partition was so heavy that its impact was felt immediately and emphatically when India and Pakistan commenced cricketing ties in 1952. Concerning Bodyline, it was said of Douglas Jardine that while his passion would win the Ashes, he would lose the empire. But where the captains of India and Pakistan were concerned, in 1952, both Lala Amarnath and A.H. Kardar seemed more intent on drawing a match than winning it; even a minor risk that could lead to defeat was considered anathema.

From a cricketing perspective, the series was terribly boring, what with all five Tests drawn, yet passions ran high, not the least because three players from Pakistan—skipper Kardar, Gul Mohammed and Amir Elahi—had earlier played for India. The complex drama of Indian politics and social life had found instant and telling expression in cricket; this was obviously to be felt on the field of play as well as the minds of the supporters of the two teams.

By 1955, when the two teams met again (this time in Pakistan), cricket had almost become war by proxy, as it were. It was easily the most popular sport in both countries; in this game of “flannelled fools" people of India and Pakistan found refuge, solace, but also the opportunity to score political brownie points. Indeed, the sentiments of people on either side not to lose to the other had intensified so much that players and officials from both teams were also completely spooked by the pressure.

Allegations of cheating (by umpires) and spying (on team tactics, etc) flew thick and fast. Matters reached a crescendo at Karachi when Amarnath (now India’s manager) and Kardar almost came to blows in the foyer of a hotel as the Pakistan captain was suspected of trying to influence an umpire. Amarnath and Kardar, it might be remembered, had played together for undivided India, and had been friends for more than a decade.

Things soured so badly after Pakistan’s tour of India in 1961-62 that the two countries did not engage in any cricket for almost 17 years—till 1978, when the impasse was broken by the new dictator Zia-ul-Haq and the new government of the Janata Party led by Morarji Desai. The two countries had gone to war twice in this period, and just when it seemed that cricket ties between India and Pakistan were interred forever, came the breakthrough, bringing in its wake new hope of renewed friendship.

Indeed, while politics has often been the bane, it has also sometimes been a boon for Indo-Pak cricket. Cricket in turn has delivered the path for the process of peace to begin again after the two countries had reached a major, seemingly unresolvable crisis. 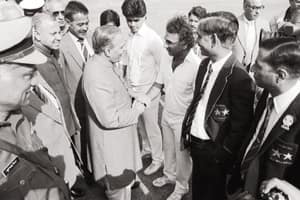 Interestingly, those defined as “hawks" in the lexicon of politics have played the more constructive role in Indo-Pak cricket. Like Zia-ul-Haq in 1987, the BJP government, always accused of fanning anti-Pakistan sentiments, surprisingly cleared India’s tour of Pakistan in 2004. There was still a formidable lingering opposition to any sort of interaction with the neighbouring country after the Kargil war of 1999, but A.B. Vajpayee’s government, even if only to use cricket as a populist vote-catcher in the elections that were round the corner, made a move that was to bring fresh vigour into the peace process. That the BJP lost those elections is, of course, not germane to the issue, only the irony of political life.

In the six years since, much like the 54 years before that, the fate of Indo-Pak cricket has matched the mood of the political relations between the two countries, all adding up to an extraordinary roller-coaster ride, which has often been thrilling, oftentimes chilling, but never ever boring. The barometer has swung from extreme friendship to extreme hostility, and for the people of the two countries, encompassed almost the entire range of human emotions.

Despite the backdrop of sustained political dissonance since Partition, India and Pakistan have used cricket (and of course Bollywood) to cut common ground. In the best of times, lucrative offshore tournaments were the norm in the 1980s and 1990s to feed the demand of the Asian diaspora. But even in the worst of times, the two countries collaborated to host the cricket World Cup—in 1987 and 1996—to ensure that the balance of power in the sport stays with the subcontinent.

These look to be trying times again for cricket relations between the two countries. The effect of 26/11 lingers and the mood, at least in India, is certainly sombre. Pakistan have had to forsake their share of hosting 2011 World Cup matches along with India, Sri Lanka and Bangladesh and only this week, none of their players found favour for the third edition of the Indian Premier League (IPL).

Ayaz Memon is a Mumbai-based writer and commentator.