Lounge Original: ‘A Poem for Jyoti Pandey’ by Akhil Katyal

A description of people

I remember that day

the CS metro station, and stumbling

into a sea of feet. The sky was

A few days before,

a bus near Munirka had stumbled

into black, making the city

At Rajpath, the first thing I see -

a girl has climbed up a lamp-post,

she has caught the South Block

between her forefinger and thumb

and her shout has licked the sky clean.

have come after a FB post had told them -

then who’. One of them carries a polythene bag

with a water-bottle, two text books

Behind them, a group of four women,

plastic green bangles on their wrists,

look up at the lamp-post, cheer the girl on

and eat the salt of her air.

Racing past them on a black Pulsar,

on the number plate, letters, numerals

and caste name, race up and down

the road, looking quizzically at the banner

that says something about Manipur.

A journalist files her report,

saying into the camera ‘…yes, the crowd

is mostly middle-class but…’

Next to her, a DU girl carries a banner that

asks for the moon for her city.

Around her, a few thousand

write ‘Justice’ on the asphalt

are readied behind them. 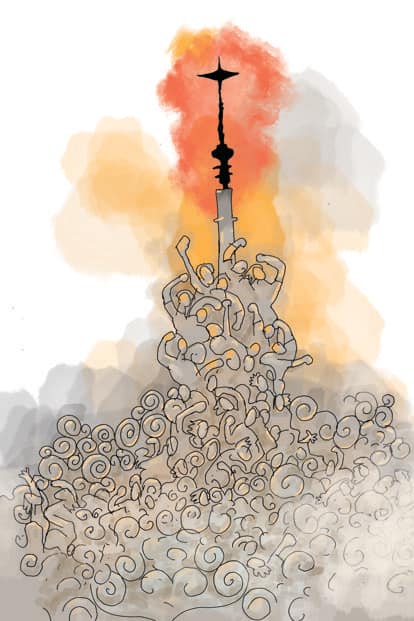 Akhil Katyal is a poet based in Delhi. He recently translated Ravish Kumar’s Ishq Mein Shahar Hona as A City Happens In Love (Speaking Tiger).