Home >Leisure >Rebirth of a classic

Rebirth of a classic

Rebirth of a classic

In 1936, a strange and melancholy novel titled The Blind Owl appeared among the Zoroastrian and Iranian expatriate communities of Mumbai. It was written by a young man who had spent most of his working life in Iran, doing clerical jobs, and was living in Mumbai at the invitation of a friend after falling afoul of the censors at home. The name of the writer was Sadeq Hedayat, now considered the greatest Iranian writer of the 20th century, and The Blind Owl has now been newly reissued by Oneworld Classics. Every novel is also implicitly a theory of the novel, and in Hedayat’s book we see the working of a modernist impulse in a culture still committed to a traditionalist understanding of literature. “I am obliged to tell a story. Ugh!" complains the narrator at one point. Hedayat’s narration, with its portrait of “the shadow of the mind" and morbid symbolism, seeks to excavate a layer of the human personality much more remote than those found in “well-constructed plots". In one scene, the narrator methodically cuts up the corpse of a woman and drifts through many worlds while burying it; in another, two men are shut up with a cobra in a dark room that will be opened only when one of them has fallen to the snake. 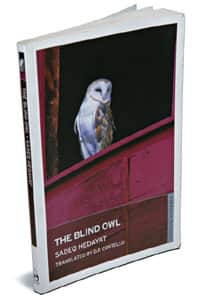 Like many other modernist novels, The Blind Owl can also be read as a parable about artistic creation: about the sensitivity and suffering of the artist, his or her rejection of the values of bourgeois society, about the need to find a private language just as one must find a private life. Walking down the street, the narrator remarks of his fellow men that “Each and every one of them consisted only of a mouth and a wad of guts hanging from it, the whole terminating in a set of genitals." This damaging indictment of man as hungry and materialistic is simultaneously a strength of the book and a weakness, since it foregrounds the narrator’s own inability to empathetically imagine the life of any person other than himself.