Come summer and those who can, head for Europe’s cooler climes. This annual migration of the well-heeled Indian hasn’t escaped the notice of international auction houses; major London auctions of Indian art are held in June. This year, despite the economic downturn and crash in art prices, is no exception. “No doubt we are living in a different world," admits Maithili Parekh, India representative of Sotheby’s, referring to the vastly altered market scenario since last summer. “But the positive thing is that it is becoming a buyer’s market." On offer: (top) Vivek Vilasini’s ‘Last Supper Gaza’ will be in the Christie’s auction; Jogen Chowdhury’s ‘Day Dreaming’ will be on sale at Sotheby’s.

Hugo Weihe, international director of Asia art at Christie’s auction house, agrees that auctions are more tightly curated in the wake of the downturn. “Now, selectivity is more important than ever," he says. Ninety-seven works will go under the hammer at Christie’s in a 10 June auction, among them an F.N. Souza, an M.F. Husain, an early Tyeb Mehta and two works by Bawa.

Since buyers tend to be conservative during a slowdown, Weihe says masters from the modern period of Indian art, such as Husain and Souza, are in greater demand because they are “less of a risk". As are “blue chip" contemporary artists such as Subodh Gupta and Jitish Kallat. “Their works have become more affordable," he points out. “(And) these artists are here to stay." 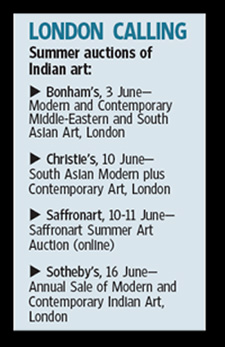 The two major auction houses are very old—Christie’s was established in 1766 and Sotheby’s in 1744—and are likely to take business cycles in their stride. Mirroring the larger world outside, Parekh views weaker cycles as a corrective—strong artists and works emerge stronger, weaker ones suffer. “Good art will do well; mediocre art will fall slightly," she says.

Around 2000, Indian art achieved a new level of prominence internationally and this higher profile was buoyed in the boom years that followed. The recognition was overdue, says Weihe. He points out that museums around the world are catching up—the Mori museum in Japan recently hosted Chalo! India, a show of Indian contemporary art, and the Guggenheim museum in New York is planning one in two years.

But, for all the hype, Weihe stresses that masters of the modern period such as Mehta, Souza and Husain still haven’t received the critical attention that is their due. “We need catalogue raisonne, monographs, retrospective exhibitions," he says, adding that their early works are both under-appreciated and underpriced.