Touch screens have transformed the way we browse the Internet and entertain ourselves. In fact, now we don’t click and type, but pinch, zoom and swipe. It has been almost a year since the first tablet was launched in India in November 2010. And by the look of it the craze for tablets is just on the rise.

However, not all of us can afford the swanky top-of-the-line versions. If you can’t imagine buying the iPad 2, Samsung Galaxy Tab, Motorola Xoom or HTC Flyer right now, but still want to experience how a tablet works, you need not wait any more. To help you make the right choice, we waded through the Android-based affordable tablets out there to bring you six we think you can try out. You can view, write, edit documents, browse the Internet, watch a movie, and play ‘Angry Birds’ quite smoothly for something at this price point.

Upside: Works well for video chats, with a built-in stand that can also be used to turn your tab into a digital photo-frame.

Downside: The resistive touch screen is clunky and lacks multitouch. The buttons on both sides feel like ancient switches. The tablet is quite heavy, and it is unlikely that the Android version will be updated. 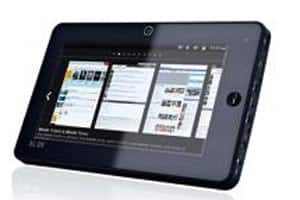 It comes with 8 GB storage that can be extended up to 32 GB with an SD memory card. To cut costs, iBall has gone with only one front-facing camera, and no rear camera. As a result, it has a good 2 MP camera for videoconference calls, and it also comes with an HDMI out, mini USB and SD card slots. The device supports Wi-Fi and Bluetooth, but lacks built-in 3G.

Upside: The iBall Slide has a USB port with which you can connect it to your PC or attach extra memory, keyboard, data dongle, etc., making it easy to connect and work on. The HDMI allows you to connect it to your TV to watch videos easily. It also comes with 8 GB internal memory built in, so the majority of users will not need to buy more storage.

Downside: There’s no rear camera and no SIM card support for data connectivity. Connecting to 3G requires a USB data dongle, an added expense of around ₹ 2,500. Audio quality on the iBall is terrible.

*Prices are subject to variations.

Upside: It has GPS and a 4200 mAh battery, one of the best in the market. Play, browse, view, edit all day long and it still has enough juice left.

Downside: There is no internal storage. Users will have to spend more to add a memory card going up to 32 GB.

Upside: It comes with offline GPS and can be used as a navigation device even when you are not connected to the Internet. You will need to buy additional maps though. Also, for those who like it colourful, it comes in black, white, pink and blue.

Downside: Lenovo has no plans to upgrade to Android HoneyComb for now, so what you see is what you get.

Money matters: It will be launched later this month at approximately ₹ 14,990.

Upside: The tablet is light to hold at about 395g. Its processor is strong, which means less lag.

Downside: There is no 3G support or GPS.

Downside: No internal storage. Comes with a 4 GB memory card that can be replaced later. You’re also stuck with the Reliance data connection—it’s good for now, but you can’t switch 3G providers.

The tablet for everyone

After a series of low-cost computers that failed to materialize, the government gives us the world’s cheapest tablet.

The Aakash tablet, created for the government by DataWind, is not really meant to be put through the same paces as these other tablets. Still, this indigenously manufactured tablet, which is available at a subsidy for students at ₹ 1,750, is aimed at helping everyone catch up with the digital world. Availability details are sketchy, but the tablet will likely be distributed through institutions before it eventually goes on sale for the general public, for ₹ 2,999. The Aakash tablet will also come with unlimited GPRS access at ₹ 98 per month.

It’s not a pretty device, and in terms of functionality stands far behind every device listed here, with a resistive screen that registers clicks after a long pause, a 366 MHz processor that is only capable of handling the most basic tasks, coupled with only 256 MB of RAM. Running Android 2.2, the tablet is best used for browsing simple websites that don’t have too many images or video elements, and for tasks like word processing. It’s definitely limited but gives a whole new meaning to low cost that might make up for it.