Turmeric has at least 6,000 years of documented history of its use in Ayurvedic medicines and socio-religious practices

In the 13th century, writing about his travels in China, Marco Polo mentioned “a vegetable which has all the properties of the true saffron, as well as the colour, and yet it is not really saffron". He was describing turmeric.

Known as haldi in Hindi and manjal in Tamil, turmeric is derived from the Latin word terra merita (literally, meritorious earth). The word haldi is derived from one of turmeric’s Sanskrit names haridra which means ‘that worn/used by Vishnu’. There are more than 50 names for this spice root in Sanskrit, each talking about its different properties. Varavarnini, for example, points to its colour and auspiciousness, kanchani refers to its golden hue, hattavilasini indicates that it shines in the marketplace and has a great commercial value. Turmeric belongs to the plant family Zingiberaceae that also includes ginger, galangal and cardamom.

According to the book, Turmeric: The genus Curcuma (edited by P.N. Ravindran, K. Nirmal Babu and Kandaswamy Sivaraman), turmeric has at least 6,000 years of documented history of its use in Ayurvedic medicines and socio-religious practices. The world is waking up to the natural healing and anti-inflammatory properties of turmeric, which have been used since the vedic ages in the Indian subcontinent. Of late, modern medicine has started to recognize its importance, as indicated by turmeric’s presence in more than 3,000 publications in the last 25 years.

The turmeric plant can grow up to 1 metre in height, with oblong leaves tapering towards the ends. The roots, or rhizomes, look similar to ginger, but reveal a bright orange colour when slit open. Its flavour can be described as earthy, bitter, peppery and pungent. The bright colour is because of the bioactive compound cucurmin, which has powerful anti-inflammatory and antioxidant properties.

As per the APEDA Agri Exchange, India is responsible for more than 80% of the world’s turmeric crop. India is also the largest exporter. Andhra Pradesh and Tamil Nadu are the top two turmeric producing states, as per the spice production report of 2011-2012 by the Spices Board India.

Since there are no turmeric seeds, the mother rizhome or its parts are sown. Planting starts in the beginning of April and is completed by May. Chili peppers are often grown as a border around the turmeric crop as natural pest repellants. It takes nine months to harvest a crop. The freshly harvested rhizomes are boiled in large vats of water for around 45 minutes, in a process known as curing, and then dried for roughly 15 days. They are said to be cured when the dried turmeric fingers produce a metallic sound when broken. At this stage, they are polished and then powdered to obtain the golden yellow spice powder that adorns the spice box in every Indian kitchen.

Because the turmeric crop is time consuming and tedious, farmers are now opting to grow crops such as maize, soya and cotton that are less time consuming which, in turn, has resulted in a decline of turmeric production in the country over the past two to three years. 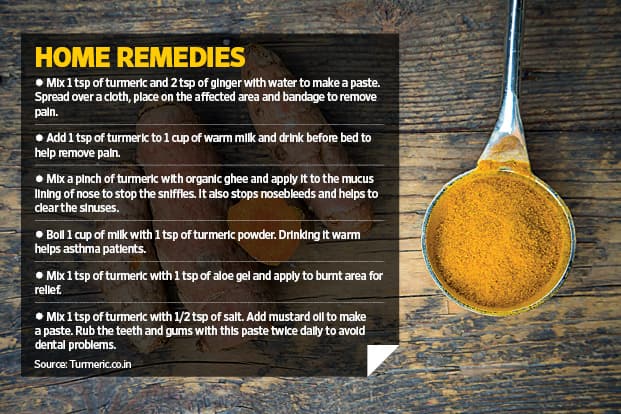 Many Indian weddings involve a haldi ceremony where the brides, and sometimes the grooms, are anointed with turmeric paste on their face, hands and feet.

South Indian weddings would be incomplete without turmeric. The thali, or the sacred thread that the groom ties around the bride’s neck, is a cotton thread stained yellow with turmeric, with whole turmeric tied to the thread as well. A plate full of turmeric-stained raw rice (akshata) is passed around to all the elders, who would sprinkle it on the newly wed couple to bless them. Kumkum, or vermillion, the other star of a wedding and a Hindu bride, is turmeric treated with slaked lime.

As a part of pooja rituals, turmeric powder is mixed with water to make a conical shape that signifies Hindu god Ganesha and the first prayers are offered to this. Come Pongal, which falls around the start of the turmeric harvest period, the rhizome along with the leaves are tied around the neck of the pongal pot, signifying auspicious beginnings.

While turmeric powder is the form used in most Indian cooking, the fresh root when in season is used to make a pickle in brine or lemon juice. Sometimes, fresh turmeric and another rhizome called mango-ginger, or ambe halad, are used in combination to prepare this fresh pickle. It is also useful in preparing a spice paste by grinding fresh turmeric along with ginger, garlic and green chilies, to add to curry bases for intense and fresh flavours. Fresh turmeric root can also be crushed and steeped in simmering milk, which makes an excellent Ayurvedic home remedy when mixed along with honey to soothe any throat irritation or cough. And it doesn’t have any side effects.

Kachchi haldi ka halva is a unique dish from the North Western Frontier Province, where ground fresh turmeric is fried in ghee and then made into a halva. In Konkani cuisine, when fresh turmeric leaves are available, they are used to steam rice dumplings called patholi. The leaves impart a distinct sweet fragrance to the dumplings. The leaves are also used for steaming fish.

The British started using turmeric in their curries early on, in the 19th century. The Art of Cookery made Plain and Easy by Hannah Glasse (1847) gave a recipe for an Indian pickle made using turmeric. Most commercially available curry powders have turmeric powder as one of the key ingredients. Turmeric features in the cuisines of India, Pakistan, Bangladesh, Nepal and Sri Lanka. It also makes an appearance in the cuisines of Malaysia, Vietnam, Thailand and Indonesia. It is not used in Chinese cooking, but they do use it for its medicinal properties. In Lebanese cooking, a generous quantity of turmeric is used in making a cake known as sfouf.

As mentioned in the book, A Treasury of Persian Cuisine by Shirin Simmons, turmeric is used quite often in Persian cooking and sometimes as a cheaper alternative to saffron. This book lists an ancient Persian remedy for fractured bones, used even to this day, which is two beaten eggs with a teaspoon of turmeric and raw beef or lamb bone marrow as dressing.

Given its health benefits, ensure that you buy the best quality turmeric powder or better still, buy the dried turmeric and grind it yourself.

Since ancient times, turmeric has been used as herbal medicine for ailments related to stomach, liver and skin. South Indian women apply kasturi manjal on their face after a bath to avoid skin blemishes and reduce facial hair. Turmeric has also been used to heal wounds.

According to Ayurveda and Traditional Chinese Medicine, turmeric is known for its digestive and liver-friendly properties. It is also said to relieve arthritis and regulate menstrual function. It has an antibacterial effect both on the skin and internally.

As a medicine, turmeric can be taken as fresh root, in powder form, capsules or as a tea. For skin conditions, a turmeric paste can be applied locally. It is also used as an additive to soaps and scrubs.

A chemical analysis of turmeric has shown the presence of a number of pharmacologically active substances such as cucurmin, cucurminoids and volatile oils. Studies are on to prove the efficacy of turmeric in prevention of Alzheimer’s and several cancers.

A doctor turned nutritional consultant, culinary trainer, food writer and columnist, who’s learning to grow the foods she likes to eat, Nandita Iyer lives in Bengaluru and is mom to a five-year-old gourmand son.