Man minus his art

Man minus his art

I’ve never hidden the fact that I love young girls. Once and for all, I love very young girls," yelled Roman Polanski at reporters during the 1977 Cannes Film Festival, soon after he fled the US to evade charges of statutory rape. His unseemly bravado went long unpunished until last month, when he arrived in Switzerland to collect a lifetime achievement award despite the known risk of arrest. 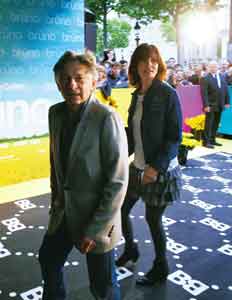 The fallen: Polanski and his wife arrive for a screening in Paris. AFP

Polanski’s comeuppance for a long-forgotten crime may have passed with little notice if it were not for his overwrought supporters. A star-spangled roster of actors, directors, artists and writers rushed to protest his arrest—as Bernard-Henri Levy’s petition put it—“like a common terrorist" for “an episode that happened years ago", an ill-chosen euphemism for drugging and raping a 13-year-old. Their tone-deaf outrage in turn evoked a public furore spanning continents, uniting liberals and conservatives alike.

Luckily for the authors on that list, much of the ire was directed at Hollywood. The three literary gods—Salman Rushdie, Milan Kundera and Paul Auster—escaped relatively unscathed since they merely signed the petition. Their not-so-highbrow peer, Robert Harris, foolishly tried to do more, penning a New York Times op-ed that, in effect, let Polanski off the hook wholly by virtue of his celebrityhood. Harris’ loyalty may seem crudely self-serving (Polanski’s upcoming film The Ghost is based on his book and screenplay), but he subscribes to a long-honoured literary tradition of artistic entitlement. Back in the 1960s, Kundera defended novelist Bohumil Hrabal’s refusal to act against the Communist state, saying, “A single book by Hrabal renders a greater service to people, to their inner freedom, than all us of with our gestures and proclamations of protest!"

It was an oddly prophetic defence. In 2008, Czech journalists revealed that a 20-year-old Kundera denounced a young pilot, Miroslav Dvoracek, as a spy to the Communist secret police, sentencing him to 14 years of hard labour. While he has rejected the accusation, it perhaps explains why Kundera so ardently subscribes to the idea of great art as redemption for personal crimes. Rushdie offered the same line of reasoning in 2006 to support Günter Grass, who admitted to serving in Hitler’s Waffen SS as a young man. Grass ought not to be condemned for a “youthful mistake", Rushdie said. As the Polanski debacle reveals, this notion of artistic licence is no longer shared by the masses, who tend to believe in more mundane principles such as equality under the law. “Those who still subscribe to that peculiar idea of an artistic get-out-of-jail-free card may be conflating it with (the idea)...that liberal democracies should, and do, accord artistic expression a relatively strong protection against official censorship," wrote Jonathan Gilmore in The New York Times.

Miroslav Dvoracek’s wife put it more simply: “We’re not surprised that Kundera’s name has surfaced in Czech media reports as the informant. Kundera is a good writer but I am under no illusions about him as a human being." If Marketa Dvoracek, like most ordinary people, is capable of differentiating a man from his art, perhaps it’s time Polanski’s supporters learnt to do the same.