Home >Mint-lounge >Features >How to write a crime masterpiece

How to write a crime masterpiece

How to write a crime masterpiece

Perhaps the greatest crime novels of the 21st century will be written by Indians. “Great" is certainly an accurate description of the 900-page Sacred Games, a masterpiece of early 21st century literature.

Let’s take a closer look at how Vikram Chandra wrote his manifold narrative, so impeccably woven around two antagonists—a slightly corrupt police inspector and a don with a karmic bend—who, with elegant plot symmetry, mirror one another and are inextricably linked in a web of brutality, but also love. 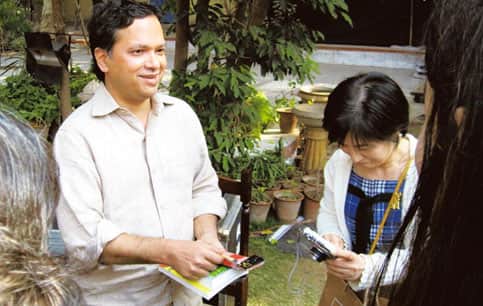 Sacred Games is a labour of love, or perhaps hate; a reaction to the scraps that Chandra’s relatives in Bollywood have got into with the Mumbai underworld. They were targeted by extortionists and even shot at. As a writer, Chandra, an aficionado of crime fiction, takes pleasure in utilizing the genre’s tropes.

So it seemed logical to write a thriller instead of regular IWE (Indian writing in English) stuff. The novel’s complexity puts it in the league of Russian classics; you constantly need to refer to the detailed cast list and download from www.vikramchandra.com, PDF dictionaries to decode the gangster lingo.

At its broadest, the novel is a tale of Mumbai’s underground machinery, from small-time hustling to armed gang wars, of good men going to seed and the upward mobility of baddies; but it is also a nostalgic look at lost innocence, those bygone days of Rimzim soda pops and honourable crooks.

In terms of reading value, Sacred Games is worth at least 10 regular novels; it’s crammed with stories within stories taking you through the history of Indian espionage, the subcontinental politics of post-Partition blues, how to write a Bollywood screenplay—each segment almost a novel in itself. But I can assure you that the weeks you spend reading it are nothing compared with the years it took to build.

“Build" is the word. To keep track of the complex material over an eight-year research and writing period, Chandra adapted a highly specialized project management software. “One of the things writers want when they’re constructing a narrative is an architectural overview of the whole thing—characters, times, places, and also how all this is shaped into chapters, sections, and so on. That is, you want to keep track of both story and discourse," Chandra told me when I interviewed him recently. “People in the past have done this with index cards and scene breakdowns and squiggles on walls. But since I’m such a nerd, I, of course, wanted to do this with computers, and I was certain that somebody must have built (a) software that would do this."

He was wrong. But he then met an Israeli thriller writer in Jerusalem, who told him about Microsoft Project. “It’s a planning tool to manage projects, including schedules, materials, people, locations; people in industries from construction to advertising use it. The interface isn’t friendly, and it’s absolutely not built for analysis of fiction, but it worked. And it did really help me a lot, especially for keeping track of chronology, which in Sacred Games is quite broken up by the narrative structure."

Shuttling between India and the US worked to his advantage. “Writing makes some kind of going away necessary, I think. Even if you don’t go abroad, you finally have to isolate yourself in a room and remove yourself from the environment you’re writing about," said Chandra. “I think this is why artists have always travelled—it doesn’t just broaden the mind, it distorts it in all kinds of interesting ways."

Sacred Games has been translated into 15 languages and a Hollywood company is developing a movie, with a screenplay by celebrated English playwright Howard Brenton. So what is Chandra himself doing next—another thriller? “I’m working on a new book, but it’s quite different. It certainly has people doing bad things to each other, but the form doesn’t engage in a conversation with crime novels, thrillers, detective stories," he said. “This doesn’t mean that I might not come back to the form later. And I keep reading, for pleasure and instruction, within these genres."

In conclusion one might say that Sacred Games is the most stunning literary experiment in a long time. If the Nobel Prize was awarded for genre fiction, Vikram Chandra would deserve it. At the least.

Zac O’Yeah is a Bangalore-based writer of Swedish fiction whose new book is Once Upon a Time in Scandinavistan.