The Moto G4, although a capable Android phone, is fighting with its own sibling, thanks to the perplexing price tag 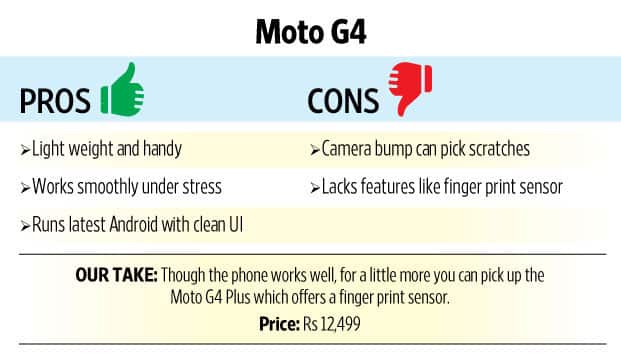 Also Read: Why are Lenovo and Motorola splitting the Moto G smartphone range? Moto G4 is slightly bigger than its predecessor, yet doesn’t feel hefty or too big in the hand. It weighs 155g, which makes it lighter than any of the budget smartphones we have seen and liked recently. Though the back doesn’t curve like that of its predecessor, the fabric-like finish feels soft and grippy. The volume and the power keys are placed mid-way along the side panel and can be accessed with the same hand that is holding the phone. We didn’t like the slight bump around the camera module and saw it picking up scratches. What is likeable is that the back is removable, so you don’t need a SIM extractor to access the micro SIM or micro SD card in case of an emergency. Though there is a single front-facing speaker, the sound quality is loud and crisp.

The 5.5-inch LCD display packs in a resolution of 1,920x1,020p, which is impressive for a phone with this screen size. The yellowish tint seen in the previous Moto G phones has been taken care of. Moto G4’s screen looks a lot more natural. The icons look big yet look sharp. Text on web pages and ebooks looks crisp, while photos and videos look really good. Corning’s Gorilla Glass 3 provides some protection against scratches, but it’s not entirely scratch-proof.

At this price, you get a better spec or display quality than the Moto G4. It doesn’t really stand out from the rest, but doesn’t feel inferior to any of them either.

The phone runs the latest (Marshmallow) version of Android with a stock Android interface, which looks just like the interface we see in the Nexus phones, but is a lot easy to use and doesn’t monopolise resources as custom user interfaces tend to do. There is hardly any third-party app cluttering the phone’s storage. Even Motorola has added only a single Moto app where you enable gesture controls and the things you wish to see on the lockscreen. Some of the gesture features available in this phone are twist to open camera and picking up the phone to stop the ringer. The new Android version means you can use the much improved Now on Tap and change app permissions.

The Moto G4 is driven by a powerful Qualcomm Snapdragon 617 octa-core processor paired with 2GB RAM. Compared to the likes of Yu Yunicorn, which offers 4GB RAM, the 2GB RAM does seem inadequate on paper. Yet the Moto G4 handled most tasks such as games, multi-tasking or switching between apps without any niggle or heating issues. The smartphone offers only 16GB storage but one can add more through a micro SD. It is a dual SIM phone and supports all 4G networks. Though we have seen phones with better battery backup in the price segment, the 3,000mAh battery can see you through a whole day on a single charge. The Moto G4 has a 13-megapixel camera with touch to focus and phase detection technology which locks focus on the subject almost instantly by itself. The picture quality is as impressive as that in its sibling, the Moto G4 Plus, which has a 16-megapixel camera. Colours are reproduced well in daylight shots even though the objects in the background doesn’t look properly illuminated. The level of detailing is good enough and at par with rivals, but only in daytime shots.

The Moto G4 is a uniquely-positioned smartphone with only a slight price difference from its sibling, the Moto G4 Plus. And in almost all aspects, the Moto G4 Plus is a better bet, despite the fact that the G4 too is a good phone in isolation. You can also check out the Xiaomi Mi Max for its bigger display, smooth performance, more storage and the funky looking MIUI user interface.