Thanks for Visiting Mint
You seem to have an Ad Blocker on. Please turn it off in order to continue, or whitelist Mint
HOW TO TURN OFF AD BLOCKER
OR
REFRESH IF YOU ALREADY TURNED OFF THE AD BLOCKER
Home >Mint-lounge >The big question over small teams

The big question over small teams

The big question over small teams

The International Cricket Council’s (ICC’s) decision to limit the number of teams to 10 from the next 50-over World Cup has led to disappointment among associate members—the move is bound to marginalize their participation in the premier competition. 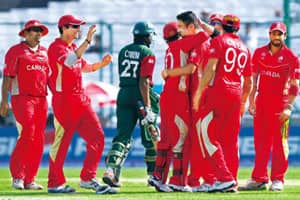 As a result, the quadrennial World Cup has ballooned to a 14-team affair in the 10th edition now on in India, Bangladesh and Sri Lanka. And despite some close matches, even an upset, between the so-called minnows and teams from Test-playing nations, it’s just fuelled the debate on whether the minnows deserve to be there in the first place. How much does it actually help them to grow, and what impact does this have on interest and competitiveness in the World Cup?

The World Cup was conceptualized in 1975 as a test of skills between the six Test-playing countries then and two associate member nations, Sri Lanka (which is now a Test-playing nation) and East Africa.

The number of associate qualifiers rose from four teams in 2003 to six in 2007, when there were several largely lop-sided contests involving the minnows. This year, the ICC went back to four—the Netherlands, Canada, Kenya and Ireland—to take the total to 14 teams. Fluke? reland’s win over England has been the lone victory for an associate team over a leading Test-playing team in this World Cup.

Although there has been the odd upset, such as Ireland defeating England, and a couple of close games involving the Netherlands and England, Canada and former champions Pakistan in the group stage in this edition, it has done little by way of compensating for the more frequent thrashing from established sides—and eroding viewership has only fuelled the debate.

There’s no unanimity among players on this count. Australia captain Ricky Ponting, among several top stars, has questioned the presence of minnows in the World Cup, while some players, such as England spinner Graeme Swann, believe playing at this level will help the teams grow.

“That’s a tough question," says Ponting, “for the sheer fact that you need to bring some of these smaller nations on in the world of cricket. We all want to see the game develop and blossom in different countries around the world. I’ve always been a bit unsure if World Cups and Champions Trophies are the right place to do that."

The Australia captain, who has been part of three World Cup-winning teams, adds: “The major reason for that is I’m not sure how much a lot of the teams actually learn when they’re getting hammered like they tend to do in a lot of those contests. It would probably be a better tournament if there were fewer teams, but we understand the responsibility for the game to continue to grow around the world as well."

Sri Lanka vice-captain Mahela Jayawardene feels the ICC should find some other way of getting associate members to play top-quality cricket regularly before they compete again in World Cups. “You need to give them opportunities to play more regular cricket with top nations," Jayawardene says.

“Maybe on and off they need to organize certain things for them because their cricket can be improved. Cricket is a global game; we need to try and make sure everyone plays and comes to that standard one day," Jayawardene adds.

An ICC meeting in May will discuss the possibility of introducing a two-tier global ODI league as well as a cut-off in the rankings for direct eligibility for the next 50-over World Cup.The teams among the top 10 that are not thus eligible will have to compete with the associate qualifiers for the rest of the World Cup slots.

This new format would ensure a certain level of participation for associates, especially in the qualifiers, but it is bound to pale in comparison with what the minnows have enjoyed so far.

There’s always been the odd, bright game from the associates. And some growth—Sri Lanka and Zimbabwe are now firmly in the list of Test-playing nations.

The first World Cup upset victory by an associate member came in the competition’s second edition in 1979 when qualifier Sri Lanka embarrassed India in the league phase. In the following edition, Zimbabwe, playing in their first World Cup, pulled off a sensational victory over Australia.

Kenya did the same in the 1996 edition when they beat the West Indies, bowling out the two-time champions for 93. “It’s like winning the World Cup," says Kenya’s then skipper Maurice Odumbe, who took 3 for 15 in that match. “It’s a dream come true. The West Indies are our idols, and to beat an idol was a great thing."

Kenya qualified for the Super Six stage in the 2003 World Cup after a forfeit by New Zealand, who refused to play in Nairobi, while in the following edition, Ireland sent Pakistan packing and earned a place in the Super Eight stage.

The problem is, consistency has never been the hallmark of such teams.

Former Indian Test batsman W.V. Raman says it is important for the ICC to find a balance. “Let’s face it, full-member countries like Bangladesh and Zimbabwe haven’t been covering themselves with glory either. They should not take their places for granted just because of their full-member status and should be put in the mix with the associates when the slots come up for the next 50-over World Cup," says the former cricketer, now a newspaper columnist.

“What the 50-over World Cup needs is competitiveness, even if that calls for a limited number of teams. Twenty20 cricket is ideally suited for globalization, considering that the format is being pushed as a prospective Olympic discipline. The ICC should not cross the wires here," Raman says.

The counterview comes from someone who has much to gain from a larger pool of teams. Netherlands coach Peter Drinnen says the move to restrict the number of teams in the World Cup will be bad for the game. “The gains (of playing against full members) are significant," he says. “So it is important that we keep getting those opportunities as that only enhances our development and increases our progress. To have those opportunities taken away, obviously, is going to be detrimental."

However, ICC chief executive officer Haroon Lorgat believes associates would have a better chance of succeeding in the 16-team World Twenty20 because it is a format that “lends itself to competition. There is a bit more spice in that".

Fifty-over cricket made it difficult for weaker teams who were trying to grow and yet find a way to “compete on every occasion", he told Espncricinfo.com (4 March). “In the 50-over format, associates might pull a blinder once or twice but over a sustained period of time, over a length of a competition, it is unlikely they will compete as strongly as the main teams," he adds.

The debate rages on, but those who may have seen Ireland beat England would probably sympathize with the minnows.