Last Saturday evening, those killing time and tedium at the bar-lounges around the main show area of India Couture Week at Delhi’s Taj Mahal hotel generally agreed that there would be “no disappointment" with Gaurav Gupta’s show. “Modern", “futuristic", “contemporary", “edgy"—words that might just be making Gupta fume with exasperation (for their repetitiveness and fatigue- evoking meanings)—went around.

Inside the show area, the set, created by Dream Design & Display represented a white frozen wave, an undulating structure that snaked across the wide ramp. For those conversant with Gupta’s silhouettes, it symbolized the shapes he loves and has been freezing into Indian couture memory and market.

From the very first garment, it became instantly obvious that Gupta’s Scape Song, his couture showing for 2016 may be “edgy", “futuristic", blah, blah, but it echoed finer, mature, stronger, fluid, almost formidable meanings. There were the arched, boned shoulders we have seen, architectural gowns and dresses, fabrics that looked like coloured water falling on fabulous models, crystals cascading as if they loved themselves and everything else they reflected. Even so, something had shifted; something was starker, more powerful, more poised.

As a couturier of bold and sophisticated garments—in this case sculpted corseted blouses, gowns with swirls of organza that could be interpreted as roses or waves of water, of cigarette pants paired with embroidered jackets, even bridal lehgnas of sorts with ombre fabric and embellishment—Gupta has grown up. That is, after having been quite a grown up for a while now. He has acquired ease, a confidence, a swirl, so to say. Whimsicality of shapes and creativity of materials is expected from haute couture but something must also be said about couturiers who give ordinary colours a new life or create exceptional hues from a shade card that may exist in our culture or our minds. In his collection note, Gupta says that his referrals were not one but multiple—Greek, Roman, Indian, English. Might that explain the temperament of some of his colours or the fluid control of his shapes? They looked kissed by magic—the blue was azure in a romantic way, the pale green had the smile of a green sparrow, the lavender could be the inside of a baby orchid, the midnight blue was from Vincent van Gogh’s work The Starry Night and the red had the stab of a Flamenco dancer’s gown.

The proportion of embroidery and texturization on each garment was so well balanced that it didn’t allow any ensemble to tip over and cascade into “excess" despite Swarovski crystals and pearls—tasselled or sewn on them. Proportion—of form and finish, dazzle and depth, fabric and embellishment—was in fact the high point of this collection.

In an India straining to retain its glocal character, priding on being Indian, without necessarily looking it—Gupta’s couture isn’t just “modern" or “edgy". It is timely and pertinent. He is a crucial voice in this fashion industry—a voice that reminds us why good form will always be a winner if life must be a vanity fair. 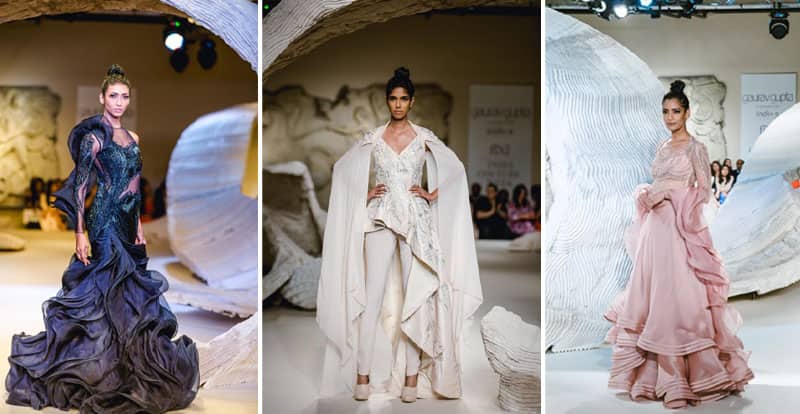