Subversive, fiercely independent and non-conformist, the film-maker who goes by the name ‘Q’ (he was born Qaushiq Mukherjee), has worked in advertising, shifted homes from Kolkata to Goa and made films that have been feted across the world. This includes one Bengali film (Gandu) that did not have a commercial release in India. He has made films in Bengali (Tasher Desh); his latest is in English (Brahman Naman); and he will begin shooting the Hindi version of the horror film Ludo later this year.

Brahman Naman, a sex comedy, has bypassed the conundrum of censor, certification and commercial release. Set in 1980s’ Bangalore, as the city was then called, it made headlines when Netflix picked up the global rights to the comedy at the 2016 Sundance Film Festival. The American Pie-style story of nerdy quizzers (played by Chaitanya Varad, Shashank Arora, Tanmay Dhanania and Vaishwath Shankar), who are determined to lose their virginity on a trip to Kolkata, will premiere on Netflix on 7 July. Edited excerpts from a phone interview:

A bawdy teen sex comedy is quite a departure for you. Where does ‘Brahman Naman’ fit into Q’s unconventional world?

It fits beautifully. My interest in cinema grew from genre films and I needed to figure out how to break people’s expectations of a Bengali film-maker called Qaushiq Mukherjee. Genre films need more resources than art films. So I thought if I start from nothing, I can expand—from Gandu to the big Tasher Desh. Brahman Naman was a great option. It landed on my lap after it had already been developed. It was a well-written script by Naman Ramachandran, who comes from a space I know; he’s also one of the dirtiest bastards alive! 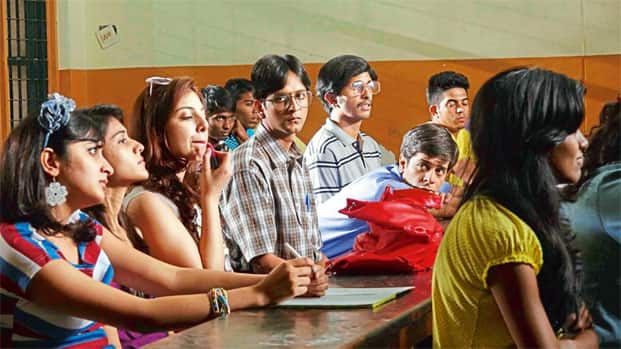 Yes, the blend was also very cool. Bengalis make Bengali films, but here a Bengali was making an English-language film set in Bangalore. It was an interesting departure for me. It means that now the real identity of Q can come out coherently—in the language of cinema. Also, I know that age and that time so well—the juxtaposition of the British colonial hangover of the 1980s, and those quiz guys in college. They were my friends, and they were disgusting. So I knew where Naman was coming from.

Did you have to recreate the 1980s’ setting?

Since we did not have the budget, we had to circumvent the needs of the period. For example, we did not have the budget to recreate or access a train, so we just built one compartment to give a feel of the 1980s. Everything is so different now compared to 30 years ago. Although I prefer to shoot live, we did have to create a few sets and the period-ness contained my framing. We shot in parts of Mysore (Mysuru) to give the impression of Bangalore in the 1980s. We also shot a bit in Kolkata, but finding period-correct locations was not a problem there.

How significant is the Netflix pick-up for you and the film?

Our international sales agent was very positive that the time was right for a film like this to be viable for the world. That Brahman Naman is a Netflix Original is very cool for us. It’s also cool not to be geographically limited. This platform comes with a very fresh lens. It’s a strong alternative and the future of content.

What about a theatrical release?

We are limiting theatrical (shows) to special screenings and festivals. The advantage of an online platform is that not only do you have a distributor who understands your content but also that there are no barriers to your expression. Brahman Naman is going to be available in multiple languages, including Spanish, French, Turkish and Italian, and go to several regions where Netflix has a footprint.

What is your sense of the future of cinema in this age of commerce and censorship?

I have been saying this for years, ever since Gandu went viral six years ago; back then, it was just a fever. We are realizing that now. I have never been a purist film-maker. I am always looking for lo-fi solutions. For example, there are great festivals with the best projection that our films are screened at. Otherwise, you can curate your own stuff online, and viewing will just move to a more solitary, less community experience. This frees you from the traps of the marketing, distribution game. I am eagerly waiting for the digital scene to open up and become more organized with platforms like Hotstar and Amazon.

You and Nikon co-directed the Bengali fantasy thriller ‘Ludo’. What is the status of its Hindi remake, which you are directing?

The Hindi script of Ludo is being written and I am expecting to start shooting it in winter. Before that I want to shoot a quick, edgy film, a dark Hindi-language film set in Kolkata.