Thanks for Visiting Mint
You seem to have an Ad Blocker on. Please turn it off in order to continue, or whitelist Mint
HOW TO TURN OFF AD BLOCKER
OR
REFRESH IF YOU ALREADY TURNED OFF THE AD BLOCKER
Home >Leisure >Freedom to study | Anil Sadgopal

Every important event in Anil Sadgopal’s life has its roots in a classroom. He says if he were 17 today, he wouldn’t have done what he did as an aspiring botanist at St Stephen’s College in Delhi five decades ago. 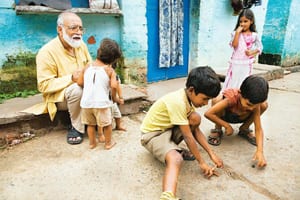 Inspired by Bhagat Singh: He not only fought for India’s freedom but also fought for a vision for post- independence India based on equitable distribution of resources and a just society based on equality. Madhu Kapparath / Mint

A panel of academics resisted admitting him to the prestigious college because he had been educated in the Hindi medium. Sadgopal insisted on being interviewed until he was told, through a note scribbled on a piece of paper, that he had been rejected. “I returned that piece of paper to the panel and asked them to stamp their decision on an official letter, explaining the reasons why they were denying me admission." The panel was appalled, but the young man had a ready explanation: “I will take this chit, take a bus straight to Rashtrapati Bhavan and ask the President why we ever fought for our independence when I don’t even have the freedom to study in my mother tongue."

Ten minutes later, the “Hindi-medium" student of science from Birla Vidya Mandir, Nainital, had been admitted to St Stephen’s College to study botany and biochemistry.

From then on—1957 onwards—he dedicated himself to fighting for a host of issues, including children’s right to education, learning in one’s mother tongue and teaching science in government schools—a struggle that won him the Jamnalal Bajaj award in 1980.

The 69-year-old botanist-turned-educationist spent two decades teaching before he finally made a small, creeper-lined house in Bhopal his home. He had a brief teaching stint at Delhi University and then taught science in government schools in the villages of Madhya Pradesh’s Hoshangabad district. Along the way, he served long tenures as member of various government-appointed committees, including the Central Advisory Board of Education (Cabe), where his role was to recommend academic reforms in the education system.

After a five-year gestation period, the legislation to make education for children in the 6-14 age group free and compulsory was passed by the Lok Sabha last week. But in contrast to the generous welcome the legislation has received in most quarters, Sadgopal’s newspaper editorials and sit-in protests on the law are full of dissent, in keeping with his record of speaking up when he feels he has to.

The Bill, in his words, is “a law to snatch away the rights of children" since it only guarantees right to education for children in the 6-14 age group and creates “layers of education" with its classification of government-run and private schools.

Sadgopal believes that he is part of a larger struggle for basic constitutional rights. “I fear the possibility of individuals getting bigger than the causes they espouse," he says, when we meet him at his home at Sahkar Nagar, Bhopal, on a Sunday. He is about to leave for a public meeting on the proposed new legislation. He has an old stitched-up khadi jhola slung on his arm and is clutching a bunch of files as we leave for the meeting.

The meeting is on the veranda of a temple, where 35-odd people have congregated. A variety of complaints are heard in the next half-hour: government schools charging tuition fees, denying admission to students, loopholes in admission interviews. With disarming candour, Sadgopal simplifies some of these issues. The crowd listens intently, given his gifts of interpretative clarity and communication.

Sadgopal’s journey as an activist perhaps began in the late 1940s, as a schoolgoing boy in Nainital. When his father, who taught chemical technology at Banaras Hindu University and later became a chemist, shifted him to an English-medium school, all he could read on the first day in class was Hindi poems. As he kept reading one Hindi poem after another, his teacher angrily asked him to leave. “I ran and did not stop till I reached home. That was a turning point in my life," Sadgopal recalls. He later switched back to a Hindi-medium school, only to return to the English-medium St Stephen’s College. His mother, a homemaker, gave him his first lessons in spoken English.

The experience led him to campaign for learning in the mother tongue in primary schools in the early 1970s, one of his first campaigns in education.

Two more life-altering experiences were to come through the two women in his life: Meera, whom he married in the 1960s and later separated from, and Shashi Maurya, a social activist whom he met in Hoshangabad in the 1980s and married in 1993. Sadgopal learnt a great deal about gender issues from them and worked with Meera for the Bhopal gas tragedy victims in 1984.

But in 1961, he left for the California Institute of Technology (Caltech), Pasadena, California, to pursue research in molecular biology, unaware that his destiny lay elsewhere. He failed the qualifying exam for a PhD. “I flunked the paper on genetics at a time when Har Gobind Khorana received the Nobel in the subject. I have never been so depressed in my life," he recalls. His second attempt at the qualifying exam was a success, leading to a 150-page paper on genetic code, which got published in the British journal Annual Review of Genetics in 1968. This led to many job offers in the US, but a group of Indians at Caltech decided to return home, moved by the severe Bihar famine of 1965. Sadgopal returned to India in 1968 with his American girlfriend Meera.

He joined the Tata Institute of Fundamental Research (TIFR), where he even set up a tissue culture lab. Around the same time, he says: “I began visiting villages in remote areas of the country to understand them better. Those were life-altering years."

In 1971, Sadgopal quit his job and moved to Hoshangabad, around 100km from Bhopal. There he, with a handful of friends, launched the Hoshangabad Science Teaching Programme, which brought together teachers from the Indian Institute of Technology, Bombay, TIFR and Delhi University to introduce innovations in the way science was taught in the government’s primary schools. “The idea was that children should learn science through experiments with their own hands." In 1978, the programme was expanded to all upper primary schools in Madhya Pradesh.

In the years that followed, Sadgopal wrote half a dozen books on education, focusing on the working of government committees. But his disappointment with such committees is evident: “To all my objections, there has been abject silence from the government’s end," he says.

In the colonies where he spends all his time even today, motivating people to send their children to school, he is deeply admired. “There is nothing that can stop him," says Ram Handia, his associate and stepson.