Why are there so many army coups in Pakistan, and none in India?

On a cold January night three years ago, India experienced shivers of a different kind. There were large-scale troop movements in the vicinity of Delhi and fears of an alleged coup could not be dismissed outright. These troops were moving in violation of established procedures that require the army to notify the ministry of defence. It was the closest India came to the C word.

The controversy generated by that story did not die for a long time. There was considerable disbelief at the suggestion. Then army chief V.K. Singh, now a Union minister of state, denied the report strongly. Whatever the truth, it is unlikely that India will see a coup. Even before independence was gained, India’s leaders took care to put in place a series of coup-proofing strategies that made any adventurism by the army difficult, if not impossible.

In Army And Nation: The Military And Indian Democracy Since Independence, Yale University political scientist Steven I. Wilkinson casts a careful look at what these strategies were and why they have been so effective. He compares India with its neighbour Pakistan, which has been a coup country par excellence for most of its existence. It is an important comparison.

From the advent of British rule in the late 18th century until 1947, India had a single army. The partitioned army had the same customs and habits, and similar recruitment patterns. Barely a decade later, Pakistan’s army took over the country’s reins; the Indian Army, in contrast, remained securely within the barracks, with its reputation as an effective and apolitical organization intact.

Wilkinson argues that Pakistan never undertook the steps that Indian leaders did after 1947. Jawaharlal Nehru’s hostility to the army is well-known. In 1955, the army chief was redesignated— from commander-in-chief to chief of army staff. This was not a symbolic change. Nothing comparable was attempted in Pakistan. When an opportunity presented itself after the army’s disastrous defeat to India in 1971, it was frittered away by then president Zulfikar Ali Bhutto, who used a newly created paramilitary as his personal retainers, giving the army breathing room to make a comeback.

This is a believable story.

Army And Nation has a wealth of data on recruitment and the changing composition of the army. When tested against this data, however, Wilkinson’s assertions offer something more mixed. The danger in 1947 was from an overwhelmingly Punjabi-dominated army; the same Punjabi-dominated army would wreak havoc in Pakistan. To be fair, as Wilkinson points out, Pakistan’s legacy problems imposed far tougher challenges than India has ever faced. In 1951, 42% of Indian Army officers in the rank of colonel and above came from Punjab (page 93). By 1981, this number had not changed much and had actually increased by two percentage points (page 179). What had changed was the religious composition of officers from Punjab: By 1981, Sikh officers formed just 18% of this set (down from 26% in 1951), while Hindus went up from 16% to 26%. This picture becomes complicated when one considers the geographic factors that determine the composition of India’s army.

If one ignores—for the moment—1947 as a starting point and looks at where India’s soldiers come from, a different picture emerges. Since Mughal times, India’s military labour markets have been dominated by soldiers from the arid agricultural zones in its west and north-western corners. After harvesting the kharif (summer) crop in October, or soon after sowing the rabi (winter) crop, these peasants would turn soldiers and offer themselves for service in India’s armies. 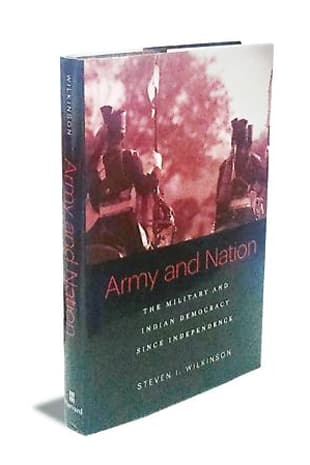 The so-called martial races thesis—now discredited by nationalist historiography—had at its base a geographic fact of life. These factors have been studied by Mughal military historians (for example, Mughal Warfare: Indian Frontiers And High Roads To Empire, 1500-1700 by Jos Gommans, Routledge, 2002). Very few officers joined the army from India’s rainy and humid areas in its east and extreme south (with the exception of Kerala).

The British inherited this pattern and did little to change it. The figures Wilkinson cites on pages 93 and 179 then take on a very different colour. If you add up the figures of Punjabi officers and those from arid zones such as Himachal Pradesh, Rajasthan, Maharashtra and Garhwal, these officers constituted no less than 62% of India’s army in 1951. In 1981, this officer corps still stood at a dominant 60%. In the decades since, this number has come down. In Punjab, for example, “the more heavily recruited Jat Sikhs have gone down in the same period from 11.2% to 7.2%, probably a reflection of the booming agricultural economy in Punjab…" (page 252).

To be sure, Sikh militancy in the 1980s dampened recruitment, but the stamp of long-term ecological factors is clearly visible. In Punjab, artificial irrigation since the 1960s has ensured year-round agricultural operations, disrupting the old patterns of availability of soldiers.

So were India’s founding leaders needlessly suspicious of the army and its intentions? It is hard to answer this. Those were India’s “most dangerous decades", to quote American journalist Selig Harrison. Not only the army, India’s leaders were anxious about many other matters.

From the threat of Jammu and Kashmir seceding—something that led to wrong interventions there—to excessive centralization, these fears dominated our national life. The army was no exception.