At 86, Jehangir Sabavala has few fears. Chief among them, however, is the fear of remaining static. “What I’m terrified of is plateauing," he says. “As a person, I don’t like it. Leave alone painting." 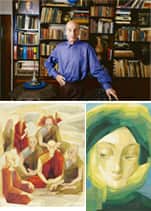 Angled: (clockwise from above) Sabavala in his south Mumbai home; Green Mantle (2006); and The Sangha (The Conclave) (2007). Abhijit Bhatlekar / Mint

By his own account, Sabavala, dressed neatly in a mauve shirt and brown trousers, has evolved, as any painter would hope for, otherwise why would he bother exhibiting again. “Not at this age," he says.

On 27 September, viewers will get a chance to evaluate this progression for themselves when Sakshi Gallery, Mumbai, hosts Ricorso, his 35th solo of 20 new works produced over the last two years. Long-time admirers will recognize recurring themes — the Buddhist monks and purdah covered women, geometric seascapes and isolated figures — and perhaps evince new ones: fields of pale sunflowers, large portraits of doe-eyed girls, field hands crouched over in Millet-like configuration. His palette and style are more muted: pale washes of pinks, purples, yellows and greys dominating airy scenes of green fields and rolling hills.

“It basically comes from my mind," says Sabavala, who for the past 60 years has used the same method to record landscapes of particular charm. Taking note of the time of day, time of year, colour scheme and season, he might return later to construct works based on these jottings.

Admirers will also remember that in 2002, Sabavala said he would likely never show again. As with every exhibit of any artist over a certain age, the murmurs have resurfaced and they have been persistently floated ever since Sabavala was the focus of an exhaustive retrospective at the National Gallery of Modern Art, New Delhi, in 2005. Even now, frailer than he was just a few months ago, Sabavala isn’t sure if this will be his last show. “I don’t know," he says. “The important thing really is not to chase more shows."

Despite recent declining interest in Moderns, Sabavala is in the unique position of being able to look back at an unerringly consistent body of work. With none of the razzle-dazzle flash of M.F. Husain, there have been few bumps or “down" periods. His mark, in many ways, has been in finessing a pleasingly steady style, usually flagged as “Cubist", which Sabavala dismisses as rubbish. “In the mid-1960s I broke away." There have been reports of occasional flare-ups with his peers, most often concocted by the media, but for the large part, he has painted to the near unanimous pleasure of the public.

“Do I reach the city? And when I say the city I really mean it, every section of the city. From your industrialist, your corporate sector, your college student, your officer, your schoolchildren, the range. My idea is whether it’s here or New York or wherever, it’s the meshing of the show with the city."

This has not always been easy. Born to a wealthy Parsi family, and educated in London and Paris during and after World War II, Sabavala returned to India in the 1950s, a stranger in his own land. His painting style was overtly “Western", and his manner — his plummy accent and immaculate etiquette — was perceived as foreign and aloof. “It was all too easy for some of Sabavala’s contemporaries to cast him as a dilettante amusing himself with canvas and brushes," notes art critic Ranjit Hoskote in The Crucible of Painting: The Art of Jehangir Sabavala. “He was different from other artists at the time," says Usha Gawde, deputy director of Sakshi. “He didn’t have dal-roti struggles."

If his wealth was seen as a detraction by fellow artists, it was all but ignored by the public, who adored his works, viewing them as they were doubtlessly intended: explorations of a changing landscape, both physical and metaphorical.

He drew India as it was, his style an ever-changing amalgam of Cubism, Impressionism and Classicism, eventually breaking away from the strictures of Cubist geometry to something more fluid and free. “From the mid-1960s to the mid-1970s, it was a struggle to break away from all these schools and find something individual," Sabavala says.

When he did, however, Sabavala found himself besieged by buyers. He showed at galleries, wanting the masses, all of them, to view his works, and was among the first artists in India to organize travelling exhibits, taking his works from Mumbai to Delhi and Kolkata. He also championed for a Mumbai branch of the National Gallery of Modern Art and agreed to have his works produced as serigraphs, thereby putting his works, now selling in the range of Rs60-90 lakh, in the hands of a larger audience.

With his new show, he has stayed true to an idyll not necessarily faithful to the current scenario, though his village figures, desolate even when in groups, appear to have some of the bone-weary fatigue of the country’s farmers. “At the beginning, I was not a person who liked to reveal my inside person. I don’t like a thousand people coming and saying, ‘Oh I know him’. How can you say you know me?" he says. “But then I realized, if you want to be a good writer, painter or photographer, eventually you have to be engaged."

Ricorso will run from 27 September to 13 October at Sakshi Gallery, Colaba, Mumbai, and will travel to London and New York.