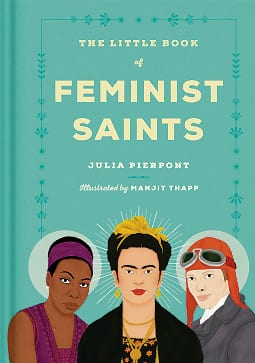 THE LITTLE BOOK OF FEMINIST SAINTS

This palm-sized pocketbook, illustrated by the Instagram star Manjit Thapp, honours 100 “feminist saints" through history. Pierpont’s crisp biographies, full of funny anecdotes, are complemented with colourful and eye-catching portraits of secular “saints" from across centuries and cultures. It features women who broke rules and gender roles—from Frida Kahlo and Amelia Earhart to Michelle Obama and Malala Yousafzai.

This award-winning Parisian artist’s book, which originally appeared in Le Monde as the series Les Culottées, is for fans of Goodnight Stories For Rebel Girls and The Handmaid’s Tale alike. Bagieu gives voice (and vignettes) to 30 of “history’s unsung heroines"—including the only female empress of China—and does so with a wallop of wit. Also featured among astronauts, animal whisperers and activists are more popular figures such as entertainer and French resistance fighter Josephine Baker and Finnish writer Tove Jansson.

YOUNG, GIFTED AND BLACK: MEET 52 BLACK HEROES FROM PAST AND PRESENT

The New York Times called this collection, which pays tribute to 52 change-makers of colour (and to Nina Simone’s song), irresistible for its “candy-coloured pages and straightforward stories". Meet courageous figures and leaders such as Martin Luther King Jr, Nelson Mandela and Rosa Parks, and cultural icons such as Oprah Winfrey and Serena Williams, in all their illustrated glory.

LEGENDARY LADIES: 50 GODDESSES TO EMPOWER AND INSPIRE YOU

The author and artist best known for Bad Girls Throughout History returns with her signature watercolour work in this gorgeously illustrated book featuring goddesses from across the globe. Pay homage to the Greek goddess of love, Aphrodite; the Chinese deity Mazu; the west African deity of earth and mortality Ala; and the Hindu goddesses of fortune and destruction, Lakshmi and Kali, respectively, as you learn more about the feminine and the divine.

Using Lee’s weekly Twitter series, and the fifth century BC as its departure point, this features 52 forgotten women—especially non-white, non-Western, and not straight. The tales of trailblazers are rendered with humour and a storytelling style that’s casual but also celebratory.