In a career spanning seven decades, the artist has depicted the changing fortunes of our country

The large canvas hanging in artist Krishen Khanna’s living room is a poignant scene of migration during Partition. A group of men, women and children, together with their livestock, tentatively make their way across the newly defined border at night. In the adjacent room, another nocturnal painting focuses on a police unit patrolling the city streets—a common sight during Partition—with a sole policeman gazing back at the viewer through his binoculars.

Made over the last decade, the paintings evoke the uncertainty of the time and are rooted in Khanna’s own experience of relocating from Lahore to Shimla in 1947. “There are so many aspects to Partition—how people got dislodged, of being dispossessed. It is horrible how your life is suddenly sheared off." 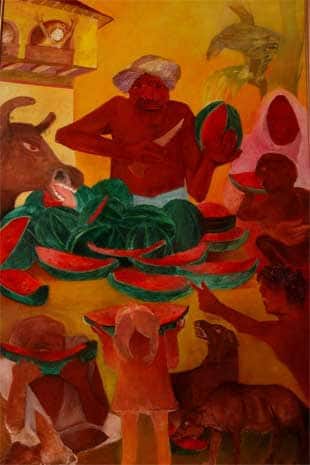 While contemporaries such as Ram Kumar, V.S. Gaitonde and Raza shifted towards abstraction, Khanna’s figurative idiom has been consistently embedded in everyday life. His canvases are populated by a cast of characters intrinsic to Indian streets: Chaplinesque bandwallahs in red uniforms, stoic truck drivers, busy dhaba (roadside eatery) owners and fruit sellers, card players engrossed in their game. Some of these find their way into an ongoing exhibition organized by New Delhi’s Dhoomimal gallery to mark the artist’s 90th birthday last month.

Krishen Khanna’s Exclusive comprises a collection of paintings and charcoal drawings made from the 1960s-2000s, and reflects his diverse set of interests, as well as the humanism and gentle humour that characterizes his art. There are cheerful fruit sellers hawking watermelon painted in bright colours, as well as a sombre, monochromatic drawing of Afghan refugees done in 2004. “The human figure generates so many emotions," Khanna reflects. “He has a multiplicity of attributes and is a compound of so many actions." 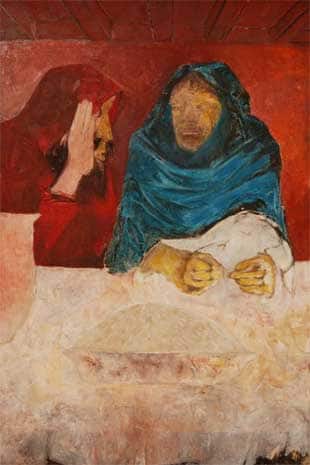 The risk paid off—he soon became the first Indian artist to win an year-long fellowship at the Rockefeller Foundation in New York, US, and was invited to be the artist-in-residence at the American University in Washington DC. Travelling through Japan, Thailand and Indonesia during this period, he created a series of abstract works over four years, inspired by sumi-e (ink-wash) paintings, but soon returned to figuration. “Abstraction means the elimination of figurative work and your connection with society. In other words, saying no to a great abundance of things," Khanna reflects. “It’s not easy being a figurative painter—you have to be true to space, colour, the drawing and, more than that, to the image that you’re taking." He drew upon eclectic references which encompassed everything from poetry to Indian miniatures, to the European masterpieces he’s been revisiting since he was a boy. “It is like ploughing and fertilizing a field, you don’t know what crop will grow, but something does come out when you’re completely switched to one line of thinking. This would have never happened if I had not left (banking). I might have become a good Sunday painter." Khanna still paints in the basement studio of his Gurgaon home every day. The wall on the side of staircase leading to the studio is lined with honours received over the years, including the Padma Shri in 1990 and the Padma Bhushan in 2011. The canvas he is currently working on is part of a series of dhabas, which Khanna likens to the British pub. It depicts a scene from a typical highway food joint: bandwallahs dressed in their red uniforms drinking tea, the cook making rotis on the tandoor, a helper carrying utensils, and the owner sitting behind a row of dishes on the counter. It is also indicative of his shift from smaller paintings to bigger canvases. “I like to paint large, because it is infinitely more rewarding to me as a painter. When you do not see the edges of the painting—it spreads like the Ajanta murals—that’s very conducive to a narrative," Khanna says. “They are a bigger challenge and you are glued in for a long period of time. Large pictures necessitate this penetrative way of looking."