It is 11 on a weekday morning and the durbar of Deepak Parekh is in full swing. Parekh is the chairman, Housing Development Finance Corp. (HDFC), and a veteran of the banking community; he is also an adviser and active committee member of various public, private and non-profit organizations. He moves from his personal cabin to the conference room, via a colleague’s empty office, meeting visitors and responding to calls—assiduously, efficiently, continually. A trio of assistants, seated outside his cabin, reply to a battery of requests to meet or speak with him—approximately 300 people, I am told, reach out to him daily. His work philosophy is as straightforward and unassuming as the workplace’s wooden furniture: “Meet anyone who wants to meet you." Colleagues confirm that “not a single mail, letter or call to him goes unanswered". 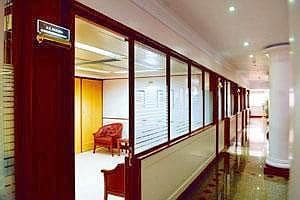 The corridor and waiting area outside his office

First, a miniature yellow “signboard", the kind one sees at accident sites, with the word “compliance" and a sketch of a slippery slope, sits on his desk. It is a witty visual illustration of “clean business"; a reminder of the importance of integrity in everyday life, and a metaphor for Parekh’s personal currency of sound values. Parekh makes it a point to give it to executives of companies he is associated with as non-executive chairman, such as Siemens India. 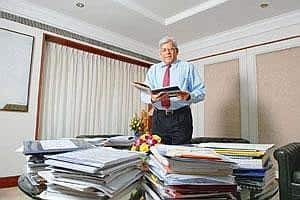 Parekh says he does not rely on books for information

Second, the office books and papers dominate every possible surface, some neatly arranged in a circular-shaped formation on a coffee table. Much of this literature is complimentary (this includes the Kingfisher annual calendar).

The profusion of books, brochures and documents on a variety of subjects captures another vital ingredient of Parekh’s professional success: his ability to engage with, absorb, retain and assimilate vast amounts of information, whether the subject matter is infrastructure, real estate, financial services or education. His three assistants manage multiple requests to meet him

The third notable item is an outdated Nokia mobile phone, one of the oldest models possibly available, which Parekh likes for its “familiarity". He recently started using an iPad, but in general eschews most modern computing equipment, relying instead on his memory to process information. “You need to have an active mind," he reiterates. The card game Bridge is a favourite pursuit to improve retention skills, as is discipline: I learn that he makes it a point to “do one 5 star Sudoku every night, even if it is 12 at night, without writing, rubbing and erasing", to preserve mental agility.

Parekh’s workstyle—with its emphasis on old-fashioned virtues such as loyalty, credibility, transparency, willingness to aid and listen, reliance on one’s memory over technology, the power of enduring relationships—might seem incongruous in the new century’s frenzied workplace. Yet his unique position in India’s business landscape underlines their relevance. Write to Aparna at businessoflife@livemint.com