A by-two by the way

A by-two by the way

At 8am every day, Bangalore-based businessman Venkatesh H. stands outside South Thindies sipping his first cup of coffee, dressed in shorts and a T-shirt. The coffee is part of a daily ritual that comes right after his morning walk.

“It’s the next step to the by-two coffee, where one coffee is split between two tumblers for two people," explains B.M. Dhananjay, who started the place in 2009. This new kid on the block is among the city’s 5,000-odd restaurants, referred to by the generic popular name of a Darshini.

These small eateries offer south Indian fare at affordable prices over the counter in minutes. Customers can eat standing at tall tables in the front half of the eatery. The idea of serving “half coffees" came from R. Prabhakar, a distant relative of Dhananjay, who is also credited with having come up with the Darshini concept. UD’s immense popularity started a fad, with several hundred eateries mushrooming across the city, copying the style of functioning and the name—Darshini.

“At that time, fast food was the big thing everywhere, so the idea was waiting for implementation in India," says Prabhakar. It was a concept that changed the way middle-class Bangalore ate.

Today, after the initial burst of popularity, a relatively smaller number of outlets have survived. They’ve had to cope with changes in demography and eating habits, and economic obstacles. A concept that will beat the Darshinis as an on-the-go dining option is yet to emerge. 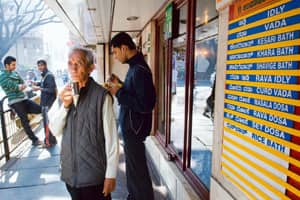 “Technically, Brahmin’s Coffee Bar was the first to introduce the idea of self-service," says Prabahkar, of the 47-year-old restaurant. But when Bangaloreans saw a sparkling clean open kitchen at UD that offered sterilized spoons which were stacked in boiling water, a place that promised 100% transparency and hygiene, they took to it. Exhaust fans and kitchen equipment, until then seen only at five-star hotels, were now on display at the Darshini down the road.

Images of everything on the menu were tastefully shot and displayed, much like at McDonald’s outlets across the world, and the service was as quick, if not faster, than any multinational fast-food outlet. Finicky customers could also ensure that their coffee was tossed around enough for the right amount of froth or, in draught beer terms, “head" on the surface. Adiga’s dosa is a popular choice at all their outlets

The idea caught on quickly: The high turnover, lower real-estate investment and smaller staff meant the food was inexpensive, and hygienic. By 2006, Bangalore had around 5,000 Darshinis, with high concentrations in south and north Bangalore, which have a large, traditionally vegetarian population. Conservative in their outlook, these parts of Bangalore were otherwise wary of hygiene standards at hotels.

Among the first to grab the baton from UD was Vasudev Adiga, who opened his first Darshini less than a kilometre from UD in 1993, naming it Adiga’s. Son of K.V. Nageshwar Adiga, who started what can still be called the city’s favourite idli outlet, Brahmin’s Coffee Bar, the business was not new to the young Adiga—but he had bigger plans than just running a single outlet. Mornings are busy in the Upahar Darshini kitchen.

Seated at his new branch on MG Road, Adiga asks his employees to be quicker. Not more than a month-old, the two-level restaurant, with self-service on the ground floor and dining area with seating on the first floor, is packed during lunch hour. “Adiga’s is now a brand," he says, but surviving in the industry has not been easy. At the outset, Adiga priced his menu to compete with the thousands of other Darshinis in the city. Enjoying the edge that his brand has, he accepts that prices now are a tad above competition.

Bangalore grew quickly in the 1990s, with an influx of immigrants from all over the country as the city grew into a hub for information technology. Tastes were bound to change, and called for innovation. The Darshinis began to offer this through menus comprising north Indian food.

“It was important to serve to a large number of immigrants and many of them at the time were north Indian," says Prabhakar, adding that suddenly, everybody seemed willing to move out of the comfort zones of their Udipi recipes to try roti-dal-paneer. The trend is said to have been started by the Shanthi Sagar chain, which also introduced the concept of having two sections, one with a seating space and the other self-service.

In 2009, in the midst of a global slowdown, more than 1,000 of the small, independent eateries shut down, unable to cope with the rising real estate prices and labour availability issues. “Even today, our biggest challenge is to keep our staff with us," says Adiga. “I might hire a cleaner today, and he won’t turn up the next day because another place offers him more," he says—but adds that the city still has the space and appetite for more outlets.