Maneesh Sharma’s Ladies vs Ricky Bahl has the classic set-up of a con-man film. A smooth-talking, six-pack-flaunting man dupes women and gets away with it. Thirty women fall for him. Thankfully, we meet just three: Dimple Chaddha (Parineeti Chopra), Raina Parulekar (Dipannita Sharma) and Saira Rashid (Aditi Sharma), who are robbed of lakhs of rupees because Sunny Singh/Deven Shah/Iqbal Khan is such a good trickster. 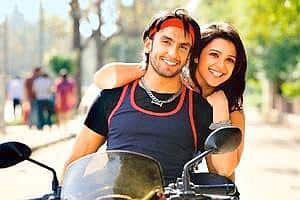 Despite the facetious situations under which he robs them, the first half of the film has the snap and crackle of a great script. The dialogues by Habib Faisal are real and soaked in humour. None of the characters is reduced to a caricature. Faisal has each character’s tongue and milieu in mind, and he especially gets Dimple’s Punjabi bluster and boisterousness to the tee. She is the film’s most endearing character, performed convincingly by debutante Chopra.

Dimple’s boyfriend Sunny fakes the papers of a mansion on Barakhamba Road to lure her father into buying it. In Mumbai, he effortlessly sells a fake Husain painting for a ridiculous sum of money to the smart manager of a communications company. And then, in Lucknow, he convinces Saira, who lives with her parents-in-law after the death of her husband and runs a family business of clothes, that he is a poor sari weaver from Bareilly. Saira’s father-in-law pays him a hefty advance after seeing just one intricately embroidered sari in Iqbal’s bag.

After he has walked away with the money to Goa, the three women are angry and heartbroken, and they hatch a plot to trap him and get their money back. The trap is Ishika Desai (Anushka Sharma), an unusually chirpy and successful salesgirl at a Mumbai supermarket who happens to be a friend of one of the cheated women. The film shifts to Goa, where he is a water-sports instructor. The film would have easily sunk into mediocrity if it were not for the performances and Faisal’s dialogues. Singh and Anushka Sharma don’t quite replicate the charm of their first film together, Yash Raj Films’ Band Baaja Baaraat, also by the same director and writer. In keeping with the script’s rootedness, Maneesh Sharma extracts realistic performances out of the actors. Everyone in the supporting cast is able to deliver. Chopra, especially, is a great new find. Her energy and ease are infectious.

Ladies vs Ricky Bahl is an unintentional genre-bender— the romantic drowning the con man in boring reform mode. What an unnecessary hijack.

This is the second of director Garry Marshall’s movies artlessly pegged to a day. Valentine’s Day was a boring multi-narrative film, but a hit in American theatres. His new film, New Year’s Eve, set in New York City, has a stellar cast, including Halle Berry (a nurse), Robert DeNiro (a man dying of cancer), Sarah Jessica Parker, Jon Bon Jovi (a star), and others playing characters whose lives and relationships are in a state of flux. Through the course of a night, there are epiphanies and resolutions, and by the end, it is clear that all the characters are somehow related.

Don’t expect complexity, although schmaltzy emotions are aplenty. But with a cast that includes the who’s who of Hollywood, the curiosity to watch it is inevitable.

Ladies vs Ricky Bahl and New Year’s Eve released in theatres on Friday.