Naman Ahuja, associate professor of Indian art and architecture at New Delhi’s Jawaharlal Nehru University, knows his antiques. Seated in his sunlit home office, with a magnificent 5ft 9-inch Shrinathji Pichvai from Rajasthan on the wall behind him, he speaks passionately of Maharaja: The Splendour of India’s Royal Courts exhibit that opens in London’s Victoria and Albert Museum (V&A) on 10 October. Ahuja is all praise for the sophisticated curatorial focus involved in putting together the exhibition, but he is livid at the stringent Indian laws that would make an exhibition of this scale difficult to organize in the country. 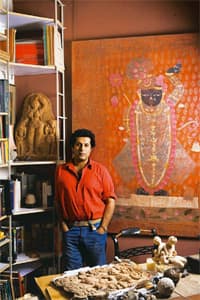 It is for the same reason that he calls antiques the silent stars of the Indian art market. “They’ve held their own despite (the) dual problems of the economic downturn and the strangulating laws that govern their trade and exchange in India," says Ahuja.

The Maharaja exhibit is an ambitious undertaking. Not only is V&A exhibiting objects from its own collection, but a number of artefacts are on loan from the royal collections of erstwhile princely states such as Udaipur, Jodhpur, Bikaner, Baroda, Bahawalpur, Gwalior and Kapurthala. Extremely rare artefacts, such as crystal pieces from the Maharana of Mewar’s collection—the largest private crystal collection in the world—will be part of the three-month show. There will be a book, guided tours, a recreation from a royal procession and a symposium. Curator Anna Jackson, deputy keeper of V&A’s Asian department, says the exhibition has been in the planning for around four years and took two years of extensive paperwork. Though the museum is not concerned explicitly with the dynamics of the art market, Jackson hopes that the broad range of artefacts on display will boost awareness and clear the shroud of mystery that surrounds Indian antiques and their undocumented provenance.

But the international market for Indian antiques has been thriving even without such impetus. It has a small but dedicated collector base dominated by European and American connoisseurs, including museums and non-resident Indians.

Sotheby’s auction house has been selling Indian, Himalayan and South-East Asian antiquities for over five decades at Asian art sales in New York and London. Its upcoming auction on 17 September in New York includes rare miniatures from the collection of Ananda K. Coomaraswamy (1877-1947), a pioneering figure in the field of Indian and South-East Asian art. Coomaraswamy established the first department of Indian art in a US institution at the Museum of Fine Arts in Boston, where he was curator from 1917 to 1937. He was particularly known for his scholarship in Indian miniatures.

It is only befitting, then, that a highlight of the auction is An Illustration to a Jataka Series: The Sixth Dream of King Pasenadi, circa 1780-90, valued at $50,000-70,000 (around Rs25-35 lakh). The 22.2 x 33cm watercolour is a depiction of an ancient Jataka tale in which a strong tiger slinks away from a jackal. The representation of a fable, it symbolizes how even an upstart can vanquish someone powerful. Explaining the inclusion of the miniatures, Anuradha Ghosh-Mazumdar, assistant vice-president of Indian and South-East Asian art at Sotheby’s in New York, says the auction house was encouraged by the resurgent interest in Indian miniatures among collectors abroad.

Miniature marvels: top and below) Opaque watercolours heightened with gold on paper from Ananda K. Coomaraswamy’s collection. The miniatures will be part of Sotheby’s 17 September auction in New York. Estimated price: $3,000-6,000.

Through its sales since 1985, Sotheby’s has sold several celebrated miniature collections, including works from the Jucker collection of Himalayan paintings in 2006 and the Albright-Knox collection in 2007. The latter was one of the most important collections of Indian antiquities ever to appear in the auction market. Living up to expectations, the auction generated a record-breaking sale for the Indian antiques market: A 10th century granite statue of the Hindu god Shiva was sold to the Cleveland Museum of Art for slightly more than $4 million.

But Indian antiques haven’t always been in the news for such celebratory reasons. The Antiquities and Art Treasures Act of 1972, formulated to regulate the export trade in antiquities and art treasures, was a well-intentioned law that has turned into a draconian legislative instrument over the years. Under this Act, it is illegal for any person other than the Union government to export antiquities that are more than 100 years old, making international trading almost impossible. Bringing them back to the country has proved problematic as well. Member of Parliament and liquor baron Vijay Mallya’s much-publicized difficulties in trying to bring back to India a sword that once belonged to Tipu Sultan (1750-99) is a case in point.

Inevitably, this has led to the development of a grey market. Though that doesn’t seem to have deterred collectors. As Ahuja points out: “Antique collectors are by nature obsessive in their pursuit."

Several international auction houses have been under scrutiny for dealing in grey-market artefacts. Maithili Parekh, deputy director of business development, Sotheby’s, insists that the auction house runs thorough checks on an antique’s history of ownership and exchange before offering it to buyers. “Provenance is key to fetching a good price in the international antiques market," says Parekh

The antiques on exhibit as part of the Maharaja collection draw attention to the fact that apart from artefacts that were pilfered from the subcontinent before and during the colonial era, scores of royal families sold their precious jewellery, furniture and heirlooms to buyers abroad in order to subvert the 1972 legislation that could have jeopardized the future of their family heirlooms. Ostensibly, these are now floating in the international antiques market and museum circuits legally.

Why antiques are still shining

Worldwide, the antiques market is driven by elite connoisseurs. “They are not looking for quick returns and are not buying art purely as investment but as something that gives them pleasure, social cachet, and is safe and solid," says Ahuja. It is for these reasons that extraneous economic factors did not cause much turbulence in demand, supply or prices in the antiques market.

Antique prices are arrived at by carefully studying their price indices and exchange history over several years. “There are set standards, idioms and aesthetics at work to evaluate antiques. Unlike contemporary art, it’s not up to a gallerist who feels like promoting a brand new artist at an exorbitant price," Ahuja adds. 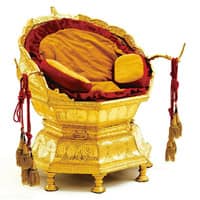 Though stable as compared to contemporary art, the antiques market is not completely immune to trends. Today, Himalayan art is much coveted by Chinese buyers who have been aggressively collecting Tibetan Buddhist art, especially works made under the patronage of the Ming dynasty (which included devout Buddhists). And in the late 1990s, an increased scholarly focus on the Basohli school of Pahari painting from India led to a sudden leap in its prices.

Still, the scale and span of price fluctuations and trends can be very different: In SaffronArt’s online Summer 2008 auction, stalwart Indian contemporary artist Subodh’s Gupta’s work (Untitled, 2006) fetched a record $1.4 million. A year later, at SaffronArt’s Summer 2009 auction, work from the same series fetched $200,000. Weigh that against this: Top-grade Chola bronzes from south India that cost around $1 million in the early 1980s sell for around $3.5 million today. Working in inflation and other factors, their price has remained more or less stable over a 30-year period.

Brushing off the dust

Experts are quick to point out that despite the increased attention antiques are getting—because of greater academic interest and curatorial focus—it would be misleading to peg antiques as the new stars on the horizon. Arvind Vijaymohan, director of the arts advisory Japa Arts Pvt. Ltd, puts it succinctly, “They’ve been around; they’re the quiet second cousins to the contemporary market boom and fall."

It has been a slow and steady journey for the Indian antiques market, and one not without its battles. Antiquated laws and a cumbersome licensing system that provide a fillip to illegal export and blatant thievery are major obstacles. Despite all of this, the stone and bronze sculptures that once adorned the temples and palaces of ancient India have proved their worth.