Director Nikhil Advani and Anvita Dutt Guptan, who wrote the new film Patiala House, begin their enterprise, I presume, rather clinically: play safe. There’s cricket, there’s a wedding, and there’s bhangra —and Rishi Kapoor, and Akshay Kumar. You can’t go wrong, the box office will jingle. Whether Patiala House does make money at the box office or not, as a piece of film-making, it is entirely uninspired. The story is that of a Sikh entrepreneur in London’s Punjabi ghetto Southall. He abhors everything angrezi because he once suffered racist abuse from whites. So he is a racist too, and a tyrant, who bans the family’s second generation from pursuing their passions—which, quite predictably, are rap music, film-making and cooking—and anything that allows contact with the evil world of whites. Consider the patriarch, Gurtej Kahlon (or bauji, played by Kapoor) a poor and abominable caricature of Kajol’s father in Dilwale Dulhania Le Jayenge. Caricatures are aplenty in this film, overcrowded in almost every scene by desi stereotypes. 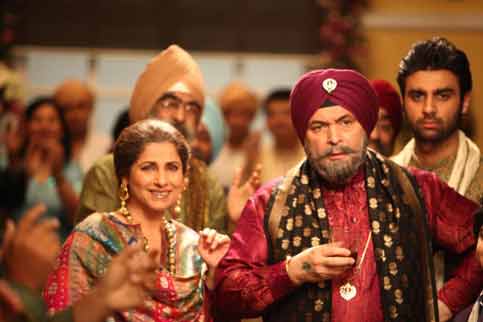 The irrelevance and triviality of the story’s premise are striking. Set in the age of cricket premier leagues and years after Nasser Hussain captained the English team, bauji threatens to kill himself if his son Gattu (Kumar) accepts the offer to play for the English cricket team. The writers of the film obviously have no idea how a cricket establishment works. There’s no irony or humour in the film to justify the gross misrepresentation—the purpose seems solely and unabashedly to make the saleable; a film that will draw audiences who consider bad, mindless entertainers similar to those in the 1980s, to be the good masala Bollywood film.

It is also an inaccurate and simplistic portrayal of the really diverse populace of second generation Indians in the UK. Creative license is a trivial tool when not used to represent complexities, when an entire community, which exists in the real world, is represented with one broad stroke. In Patiala House, a young woman wants a “Yash Choprawedding", and the others simply egg their men on to achieve or suffer the decisions of their men silently. The only woman who lives with a child alone in this neighbourhood is considered “unconventional" and is an object of gossip and ridicule. The men, unfortunately, are as bereft of life and grey cells.

The first half of the film is an unending exposition of just one piece of information: Gurtej barred his talented bowler son Gattu from joining the English team as a fast bowler when he was 17. So Gattu is sulky, shy, lifeless and speechless. The patriarch frightens the extended family and his wife, played by Dimple Kapadia. He is the man about Southall, everyone follows his rules. This is present-day Southall. After the banal first half, the second half takes off as Gattu is convinced by his cousins and Simran, a half-Punjabi girl besotted by him (Anushka Sharma) to play for England. How Gattu lands the coveted position of a fast bowler in the English team after years of not playing professional cricket is, again, “creative licence". At the age of 34, the selectors of the English team, which includes a Mr Bedi who lives next to the Kahlon residence in Southall, seek Gattu out because he is an unforgotten talent. Nasser Hussain makes appearances in some scenes, muttering some dialogues in Hindi which are entirely illegible in his thick English accent. The former English captain is a joke. So are David Gowerand Graham Gooch, who make fleeting appearances as selectors.

Kapoor is a waste in the role of Gurtej. He screams and terrorizes everyone throughout the film. It is obvious to any discerning film buff that Kapoor does not have to try at all. Every character in the film, despite its length of about 2 hours and 30 minutes, has a flat and linear graph. Kumar has two staple expressions throughout the film—eyes and body drooped and ecstatic. As the protagonist, Kumar fails to lift the film’s spirit in any way. Sharma gets the only character in the film with some believable traits, and she has an effortless charm, also seen in some of her other recent roles.

The only really engaging part of the film is the photo finish of the cricket match at the end of the film. Remember Lagaan? Except here, the makers get the stadium, the players (including a snarky Andrew Symondsand the paraphernalia of a present-day cricket match to the tee. Those were the only 15 minutes of the film when I was glued to the screen. But that’s certainly not reason enough to watch Patiala House.