After demolishing English Premier League (EPL) title contenders Chelsea on 8 May, Manchester United manager Alex Ferguson abandoned his generally short and reserved post-win celebration to take an extravagant bow in front of United supporters to chants of: “Are you watching Merseyside?" and “We are United, we do what we want".

It’s a moment that has long been in the making.

When Ferguson took over a fledgling United in 1986, they were not even among the top 10 teams in the league, and Liverpool were lording over not just English football, but the European stage as well. Ferguson made a prophetic and controversial comment soon after taking over, vowing that he would “knock Liverpool off their bloody perch".

After an incredible 25 years in charge of United, Ferguson’s dream has all but come true.

After the victory over Chelsea, United need to do nothing more than draw one of their last two games of this season, both against relegation-threatened teams, to win their 19th English league title (and the 12th EPL title since the Premier League was formed 19 years ago). This will make them the most successful team in English football history, eclipsing Liverpool’s record 18 English league titles.

“To win 19 is fantastic," Ferguson told reporters after the Chelsea match. “To be the most successful team in the country in terms of championship victories, and the minute we won (the Premier League) for the first time in 1992 (1992-93 season), the door opened for us and it’s an incredible achievement."

United have the opportunity to add to that by winning the Champions League as well when they face Barcelona on 28 May in the final.

Yet at the start of the 2010-11 season, United were widely regarded as a pedestrian team, bereft of footballing superstars, too dependent on the whimsical form of Wayne Rooney, and with an ageing Ryan Giggs still their best bet in midfield.

United answered all those questions on the field, mixing austerity with flamboyance, gritty battles with poetic victories, and turning their homeground, where they’ve won 17 of 18 games this season, into an impregnable fortress. Every player stepped up to the job: Giggs turned his age to his advantage, transforming from a lightning quick winger to a measured, controlling midfielder like Barcelona’s Xavi. Rooney compensated for his lack of goals by working tirelessly to set up teammates to score. Nani matured from a show pony who dived at every opportunity to a tough winger who slipped past defenders with ease. Michael Carrick and Park Ji Sung controlled the midfield with dynamic interceptions, quick passing and clever link-ups. Rio Ferdinand shook off injuries, and along with Nemanja Vidic, formed the core of a miserly defence. The 40-year-old Dutch goalkeeper Edwin Van der Sar made stunning, age-defying saves game after game.

“If you would have said to me at the start of the season we would be in that position, I would have snapped your hand off," Ferguson told reporters, “but you have to trust your lads. I believed in them, and they were brilliant."

Ferguson is a manager like no other—his style is mercurial and slippery, and he can trade equally in steel and silk. He combines Real Madrid manager Jose Mourinho’s defence-at-all-costs approach with Arsenal manager Arsene Wenger’s overwhelming stress on playing beautiful, flowing football. But perhaps Ferguson’s greatest achievement is his perfect understanding of the mechanisms of teamwork. It’s what gave him the luxury of making nine changes to the first team in the second leg of the Champions League semi-final against German club FC Schalke to rest his players for the match against Chelsea. What was effectively United’s reserve team still cruised past Schalke.

“I didn’t sleep last night," Ferguson said at the press conference after the Schalke match. “I picked four different teams. I went through every player, and then I told myself, ‘He’s a Manchester United player, why can’t I pick him?’"

Over the years, Ferguson has built up a reservoir of expertise so deep that he has no need for a central talismanic figure without whom life is unthinkable. The 70-year-old can just keep rotating his players, and he will be around next season to continue his cold-blooded quest for more trophies. 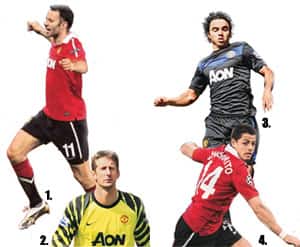 Ferguson considers him the best goalkeeper to have played for United since the legendary Peter Schmeichel, and the numbers prove it. Van der Sar holds the world record for the most clean sheets in a season, when he went 1,311 minutes (21 matches) in 2008-09 without conceding a goal. In 2007, he saved three consecutive penalties to help United win the FA Community Shield, and then saved a penalty in the 2007-08 Champions League final to hand United the title. The 2010-11 Champions League final will be his last match before retirement.

He began playing on the streets of Petropolis in Brazil at the age of 5 with his twin brother before joining Brazilian club Fluminense as a trainee at 11. United signed both Rafael and his brother Fabio in 2008 after watching them play for the Fluminense youth team. Rafael made his debut in the 2008-09 season, and has since cemented his place as United’s right back.

Lovingly called Chicharito, or “little pea", Hernandez is the first Mexican footballer to play for United. Both his father and his maternal grandfather played for the Mexican national team. Hernandez joined Mexican club Guadalajara as a trainee at 9, and signed his first professional contract at 15. He joined United in 2010 and scored on debut. With 20 goals in his first season so far, the super-quick Hernandez has been United’s best new signing.