So let me just get this out of the way right now—there is no similarity between the Jaipur Literature Festival (JLF) and the Karachi Literature Festival (KLF), which was held from 11-12 February, other than that their acronyms rhyme, and both are free only in the sense of entry being gratis. KLF—now in its third year—enjoys a fraction of JLF’s attendance and even less of its flash—Oprah Winfrey shan’t be attending any time soon and I suspect even Richard Dawkins would entertain the possibility of it being a cold day in hell were he to find himself speaking there.

There are no glamorous publishers’ parties because, for all the talk of a Pakistani “literary boom", lucrative local publishing houses can be counted on the fingers of one hand with enough fingers left over to play Rachmaninov’s Concerto No. 3 on a grand piano. That said, the third Karachi Literature Festival, running over two days and offering 50 or so sessions with participants including Hanif Kureishi, Vikram Seth, Mirza Waheed, Ahmed Rashid, Shobhaa De, Mohsin Hamid, Siddhartha Deb, and Mohammed Hanif made for a cracking weekend, in spite of the organizing body’s unfortunate penchant for cliquishness when it comes to some less international figures. What with politics being nothing short of a religion for the middle-aged Pakistani male—it came as no surprise that journalist and policy analyst Anatol Lieven’s panel discussion held at an enormous venue—was still bursting at the seams. From the back of the hall, all that was visible was a sea of balding bureaucratic pates in different stages of eminence, held rapt by the exceptionally—and I thought needlessly—adversarial moderation. While it was a perfectly competent session, if not the most exciting, the Pakistan that one actually lives in was revealed more perceptively in the session about comedy—which is appropriate, given the state of things. 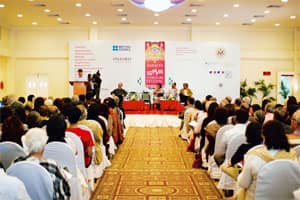 To hear about political satire from young people who are very much the product of the current environment was, I thought, a great deal more useful, not to mention entertaining, and certainly the hugely responsive young audience lining the aisles thought so too. The most winning aspect of it was their honesty and lack of bumptiousness. Asked why satirists were so selective in choosing victims—politicians are attacked far more frequently and with far more relish than religious figures or, say, the Inter-Services Intelligence, Saad Haroon responded, “It’s selective because we’re scared". The response to why he worked in English was “You can get away with a lot more in English because nobody cares"—something very few Pakistanis writing in English for a Western audience care to acknowledge.

The show-stopper, ultimately, was young Saeed, who, when told by an audience member that she was both scared for his personal safety and worried that he’d sell out, answered, and I translate, “I’m also scared for the former and deeply desirous of the latter".

Often the problem with artists, performers and literati branding themselves as brave in Pakistan is that there are always plenty of people whose daily life involves far more courage than the act of saying something mildly controversial in comparatively safe surroundings, confident of some public support. While I’m sure you can come up with a few examples from your own backyard, from our end I’ll raise you Fatima Bhutto (who naturally was not in attendance, never speaking in Pakistan other than at her book launch a few years ago). I applaud Haroon and Saeed for having the integrity and the good sense to not try their hand at that old chestnut.