Change comes to the village

Change comes to the village

There’s an incongruous new building in south Delhi’s incongruous Hauz Khas Village (HKV). If you turn left by Bagel’s Café into a lane full of chaiwallahs (tea shops) and vegetable carts (more typical to the gritty village it started out as than the New York City-style West Village it today aspires to be), the now iconic village reveals a large white property which marks a milestone: The Capital’s Bohemian quarter has got a proper boutique hotel.

Run by French owners Francois Servant and Sylvain, who uses only one name, as part of the independent Colaba House group—which also owns a boutique hotel in Delhi’s Safdarjung Enclave and a garden hotel in Tamil Nadu—The Rose overlooks a quiet aspect of the village. Surrounded by forest and watched over by peacocks and monkeys, it opened last month even more quietly. The guest house contains 11 rooms in four categories, ranging from a tiny Cabin (Rs 3,500) to larger Junior and Grand Suites, to a charming Loft room (Rs 6,500). A gallery-worthy lobby full of high-design lamps leads to a restaurant which will open “this month or the month after", says Servant. “We plan a holistic healing and massage centre on the first floor and a rooftop bar later this year." One of the eight functioning rooms already has a long-term guest. Is the village selling out? New properties have added cultural capital through music and art spaces and their cultivation of a creative community which doesn’t admit flash. But there is overdevelopment and hype around a manufactured Bohemian lifestyle.

The first “restaurant with bar and bouncer", live music venue Out of the Box, was swiftly resurrected after it caught fire last Diwali, an example of the vitality of village business. “There is no weekend concept at HKV, even on Monday, your establishment is packed," says owner Priyank Sukhija, who is bringing in six new restaurants this year, two in the next two months. “Things can only get better here." 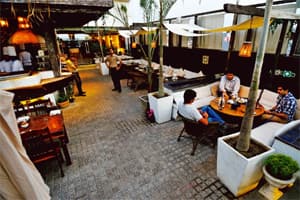 M. Mishra, a Hauz Khas broker, says there are over 200 establishments in HKV—20-25 in the pipeline in total, says village landlord Mange Ram Gochhwal—in this buzzing strip. They call for a considered look at whether unchecked development will destroy exactly what the village strives to create.

While small-time property owners are content with standard 10% increments, tenants (who asked not to be named) complain of aggressive landlords who harass them and raise rent from ₹ 10,000-20,000 for a terrace which they then hear some businessman is willing to pay ₹ 3 lakh for. “Landlords are getting rid of tenants every three months, but soon they will find out there are no takers," says one aggrieved tenant. “Who can sustain themselves at 60 grand a month? Half the people who come here are backpackers."

But an affluent clientele has also found the village: Embassy people, multinational firm employees and bankers are lavishing their money on HKV’s many establishments. This makes it worth the investment for the right business. If you look hard into the basement next to Kunzum Travel Café, you will see the washed walls of hipster firm Ultraconfidentiel, a French creative design studio with a select, mostly European, clientele. “It’s part of our identity to be here," says Pierre Arnaud Cassin, its business developer. “Here we could be anywhere in the world, in the village." Sylvain, co-owner of The Rose, the new boutique hotel.

Independent businesses appear to be operating like bigger establishments, to survive in an increasingly difficult market— only taking advantage of the lowered price tag. “We didn’t want to be on the main street," says tattva owner Anuradha Madhusudhanan. “We were looking in Shahpur Jat as HKV is too expensive, and then someone told us about this place in the back lane."

However, several businesses such as early HKV entry Cotton Curio, unable to afford the rent, and art space The Greenhouse have shut down.

But humbler establishments like Thadi, a hookah joint which functions almost like a college canteen, and Ziro, a cozy new café, are still opening: the essential HKV. These establishments are banking on careful, low-cost business models and a loyal clientele to stay afloat.

At Ziro’s homey kitchen, serving mushroom crepes and salads at less than ₹ 200, you are encouraged to stay all day and devour dressed-up Maggi. Co-owner Anup Kutty says: “The issue of rising rents is a bit of a problem. There’s a lot of competition within the property owners which makes them treat the village as some sort of a gold rush." An inner circle of appreciative creatives carry this sense of community; the relaxed Flipside Café, for example, celebrated the completion of its first year with a party for 40 faithfuls, many of whom visit a few times a week. “First of the new wave of pioneers, that’s us," grins Raavi Chowdhury, the café’s 27-year-old owner. He, like other café owners, feels the clientele has changed. “You now get people who might never have come to the village before— which is good and bad."

In this city of multiple, individual villages, it remains to be seen if Delhi can sustain the saleable subculture of its most prominent village.