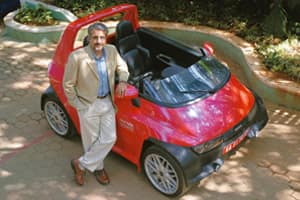 “Reva’s group philosophy talks about zero pollution and I think we have been able to achieve that in our product," says Chetan Maini, deputy chairman of Bangalore-based RECC, on the philosophy behind the move. “It was important now to reflect this in every aspect of the product." While the plant won’t reach zero-pollution levels, the company is making efforts to reduce energy and emissions.

The electric car maker will invest Rs30 crore in the new plant, which has the capacity to manufacture 30,000 cars a year. Around 20% of the investment, or Rs6 crore, would go towards green initiatives, including energy-efficient structural materials, ventilation spots on the roof, solar panels and rainwater harvesting facilities.

The factory walls are made of polycarbon honeycomb, a tough plastic with cavities inside to let in diffused natural light and keep out the heat. A high ceiling will mean ample ventilation and fewer fans. The roof will have ventilation spots that will allow air and light in, but won’t let water drip.

The factory will have the capacity to harvest as much as 21,500 litres of rainwater in 15 minutes and store as much as 65,000 litres. The water will be used through the year to wash vehicles and for horticulture. Solar panels will be used to charge the electric vehicles and waste will also be segregated, recycled and composted to nurture the plants at the site.

Reva is working on options to find an alternative to diesel generators, which are a crucial part of any manufacturing set-up in power-hungry countries such as India. This is an area where solutions are fairly limited, says Maini. Ultimately, Reva aims to depend on the sun and battery power instead of diesel generators. Due to these measures, Maini expects the company’s energy and water bills to shrink by around 30%.

Reva was set up in 1994 and seven years of research and 10 patents later, the electric car was commercially produced in 2001. The second plant will cater to both the domestic as well as the export market and is set to be completed later this year.

The new plant is already vying for a Leadership in Energy and Environment Design (LEED) rating, a nationally and internationally accepted benchmark for design, construction and operation of energy-saving, green buildings.

Green rating for factories being developed

In India, the CII-Sohrabji Godrej Green Business Centre formed the Indian Green Building Council, a council of architects, builders and other stakeholders in the construction industry, in 2004. It evaluates and grants the Leadership in Energy and Environment Design (LEED) rating.

Wipro Technologies Ltd’s 175,000 sq. ft set-up in Gurgaon, and ITC Ltd’s 170,000 sq. ft Green Centre, also in Gurgaon, are two LEED-rated buildings. According to the CII-Indian Green Building Council report titled ‘Energy Efficiency in Building Design and Construction’, Wipro clocked in energy savings worth Rs1.02 crore a year and ITC, Rs90 lakh. Around 195 projects, including offices, banks, airports, hotels, with a built-up area of at least 110 million sq. ft, have registered for ratings. So far, 19 buildings have got the LEED rating in India.

There is a lot of demand from factories to go green, says S. Raghupathy, senior director and head, CII-Sohrabji Godrej Green Business Centre. So much so that the council is developing a factory-specific India Green Factory rating system with 10 factories on a pilot basis. Reva, however, has applied for the LEED rating, not the new green factory rating.