My name is Red

My name is Red

Think revolutionary music and you’d expect something angst-ridden. But when the Pakistani band Laal, known for their songs of dissent, performed at Hard Rock Café in New Delhi last month, it was more of a celebration. Spirited melodies in Urdu and Punjabi, guitar riffs intermittent with soulful flute pieces and people dancing—Laal’s gig felt like a party with a cause.

“I feel we need to celebrate life even through the struggle. We want people to be hopeful," says Taimur Rahman, 36, the lead singer and founder of the band. 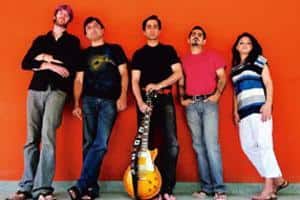 Laal consists of Rahman on lead guitar and vocals, Mahvash Waqar on backing vocals, Haider Rahman on flute and Salman Malik on bass. For their India tour, they also roped in Paul Schneiter, a French drummer from New Delhi. With a volatile mix of Marxist ideology and the poetry of Faiz Ahmed Faiz, Habib Jalib and Ahmed Faraz, Laal’s agenda is to move the masses through music. “Political speeches move the mind but music touches the heart and soul," says Taimur Rahman, who’s been a grass-roots activist for labour and farming communities for 15 years. Though he used music to mobilize people, his work as an activist was relatively low key. Laal’s music has given him visibility over the last three years.

The band first drew attention during the 2007 Lawyers’ Movement in Pakistan, when people took to the streets in protest against military ruler Pervez Musharraf’s unconstitutional sacking of the then chief justice of Pakistan. British-Pakistani film-maker Taimur Khan filmed a documentary on their work, titled Democracy in Flames. “Khan urged us to record. He took us to a studio where we recorded some songs and put them up on YouTube. We expected a couple of hundred hits but when we got 4,000, we were stunned," recalls Rahman. Laal released their first album, Umeed-e-Sahar, in 2009, protesting against military dictatorship. Since then, singing in villages, at garages and parking lots, and from rooftops, they’ve picked up a reputation for their “guerrilla concerts". “We would go to villages and announce from the masjid and ask people to collect in the chowk. We’d set up our portable systems and next thing you knew, people were cheering in agreement," says Rahman.

Their day jobs are different. Rahman is a professor of political science at the Lahore University of Management Sciences; Waqar, a news anchor; Haider, a banker; and Malik, a sessions player. “We get two reactions—one is that you’ve done something fantastic. Second, you’re foolhardy, you should have been more subtle. Sometimes we get threatening emails," Rahman says.

But subtlety means little to Laal. In a manic song, they chant Amreeka ke pitthu saare/kabse ban gaye dost hamare? (Since when have the pawns of America become our friends?) The video starts with a clip of Hillary Clinton speech in which she says, “Who we’re fighting today is who we created 20 years ago." Rahman explains that their struggle is not anti-American, it’s anti-imperialist. “Fundamentalists are strong but they are small in numbers. The vast majorities hate extremists. My band’s name is Urdu for red, I sport a Che Guevara guitar sling, I’m cutting my second album—someone must be supporting me too. Pakistan is a complex society with a lot of progressive people who love art and music. It is not a monolith. I hope to break that stereotype," says Rahman.

Taimur Rahman, founder, Laal, tells us about the basis of the title song of their second album, Utho Meri Duniya

“When Lenin dies, he confronts God and urges him to see the plight of the poor in the world that He had created. So God commands his angels:

Arise, awaken the poor of the world,

Tear down the gates and walls of the palaces of the rich,

Stir up the blood of the slaves with conviction,

Rouse the sparrow to fight the eagle…"