The psyche of a fast bowler

The psyche of a fast bowler

Are fast bowlers often victims of their own temperament or image? “Not if they use their heads," said former Pakistan captain and fast bowler Wasim Akram when I posed the question to him at the India International Sports Summit in Mumbai last week. 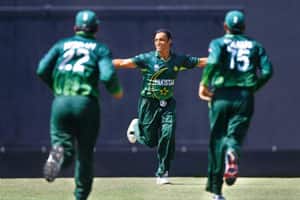 In the news again: Opposition to Shoaib Akhtar’s book is imbecilic. By Michael Steele/Getty Images

An event in Mumbai last Sunday, where former India captain Dilip Vengsarkar was to release the book and I was to moderate a session with Akhtar, was called off at the eleventh hour. So too, I understand, was a function in Bangalore. Some protests against the former Pakistan bowler were staged in Mumbai and a few other cities by followers of political parties like the Shiv Sena and the Nationalist Congress Party.

Not to be left behind, Board of Control for Cricket in India bigwigs Rajiv Shukla and Vilasrao Deshmukh (who, in case you’ve missed the connection, belong to the Congress) jumped into the fray too and demanded an apology from Akhtar for insulting India’s revered cricketers. Within a few days, the book has become a cause célèbre, as it were. I’m commissioned to review the book for the weekend edition of this paper and am still in the process of reading it, so will withhold judgement on the quality and veracity of what’s between the covers. But I do believe that the brouhaha over it and demands for a ban on the book and/or apology from the author are silly and dubiously motivated.

You would expect an autobiography to reflect the writer’s honest opinions, however uncomfortable. Indeed, the allure of such work would be that it is not an extended PR exercise—about the writer himself or others featured in it. Readers have a right to expect a tell-it-as-you-saw-it, warts and all—within the bounds of decency.

Opposition to the book is imbecilic. It manifests the xenophobic disposition in New India, which I’ve touched upon in this space in the past, compounded by the posturing of goons and stooges to make political capital. Clearly, Akhtar’s being a Pakistani has impelled the protests. I doubt that either Tendulkar or Dravid are bothered by the book’s contents. The publishers—and even Akhtar, I dare say—however may not mind the adverse publicity, for it has sparked off more interest in the book than it might otherwise have got.

It would make an interesting study to find out why fast bowlers have been typecast as aggressive, nasty and with not too much between the ears—players driven more by adrenalin and passion than common sense. It’s a stereotyping that is easily seen to be untrue either for persona or skills—Akram himself being an example of somebody who put brain over brawn—but has stood the test of time nonetheless.

Batsmen are often defined by their technique and skills (Master Blaster for Vivian Richards and Tendulkar, The Wall for Dravid) slow bowlers by their mystique (Wizard of Oz for Shane Warne), but fast bowlers are usually associated with fire and brimstone stuff even if they are the mildest of people.

There are exceptions (Butcher of Barbados for Everton Weekes and Turbanator for Harbhajan Singh), but by and large, batsmen and spinners are considered benign compared to the speed-men. Indeed, if a slow bowler displays volatility, he is reckoned to have a fast bowler’s temperament.

Consider some of the sobriquets given to fast bowlers down the ages, for instance; they bespeak mayhem, unruliness, non-conformity. Frederick Spofforth, whose devastating bowling gave rise to the “Ashes", came to be known as the “Demon". Frank Tyson was “Typhoon" for his express pace and his grim demeanour and Fred Trueman was “Fiery" in velocity as well as verbal volleys at batsmen.

There is obviously a menacing dimension to a fast bowler that finds no parallel in cricket: Anybody hurling the ball at a batsman at 90-odd miles an hour can’t be a likeable proposition on the field, however convivial he may be off it. Fast bowlers have broken fingers, wrists, ribs, hands and heads. Intimidation is part of their arsenal to take wickets and win matches.

But fast bowling is also about high skill and canny understanding of human nature. Mere pace—or just short-pitched stuff—is unlikely to trouble the better batsmen unless deployed judiciously. How to swing (or reverse swing) the ball at high velocity is an art no less than high-quality spin bowling. Fast bowlers have to be master-craftsmen and technicians to succeed at the highest level for any length of time.

Yet, fast bowlers are surely peculiar. To run in 20-30-40 yards ball after ball, over after over, match after match, year after year—often on unhelpful tracks, with the game loaded so heavily in favour of batsmen—requires strength, ego and madness that is surely uncommon.

After all that to even write a book? Well!