The man on the pavement has built a shelter of wood and plastic sheets next to a bus stop near Rashbehari Crossing, a busy intersection in south Kolkata. His mattress is placed on a platform. A mosquito net lies rolled in one corner. A steel trunk and a few cardboard boxes are arranged around the bed, along with pots and pans, bottles and jars. On one side is an earthen stove with a heap of firewood next to it.

“It is easy to find the place. There is only one Mamata-style bus stop in the vicinity," the man shouts on his mobile phone over the din of traffic. It is one of the new chic-looking bus stops, designed to display as many advertisements as possible, that chief minister Mamata Banerjee has gifted the city she wants to turn into London. Glow signs stare at commuters from the back wall and from above the roof. 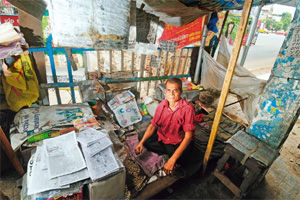 Kartick Chandra Paul, amateur astronomer and indefatigable graffiti artiste from Howrah across the river Hooghly, is no stranger to the streets of Kolkata. For more than three decades, this 72-year-old former army jawan has been fighting a guerrilla war with paint brush and pamphlets in a doomed bid to establish the primacy of a geocentric model of the universe against the accepted heliocentric one. Now he finds himself living on the same streets, still convinced that his theory is correct.

“All those who ignore me today will have to come back one day and admit that I was telling the truth," he says.

Kolkata has been long thought of as a city where everyone is allowed to have an opinion and the right to express it. A free exchange of ideas forms the basis of the curious Kolkata phenomenon, adda, or informal discussion, which often gets quite heated whether it takes place in the iconic Coffee House off College Street or at someone’s house, a tea stall, or even in an open veranda. The same logic probably explains Kolkata’s ready participation in the freedom struggle under British rule and, much later, in the Naxal movement against the established social order in the 1960s and 1970s.

Sometimes an opinion is shouted out through loudspeakers and rammed down your throat. Sometimes, as with Paul, it is expressed quietly to anyone who cares to listen. “Kolkata has always been a city where opposites mix and coexist," says Debasis Bose, a doctor by profession who has written extensively on the city’s history. “Take our cultural scene: People watch films, but they also go to the theatre and to jatras (folk theatre). In places where you have a concentration of non-Bengalis, you might also come across performances of Ramlila (plays depicting various facets of Lord Ram’s life)."

Paul believes the earth is rooted to one place in the universe and its only motion is rotating along its axis from west to east once every 23 hours, 56 minutes and 4 seconds. The sun, he claims, is lighter than earth and revolves around it in an elliptical path tilted at an angle of 231/2 degrees to the equator once in 365 days, 5 hours and 46 seconds. 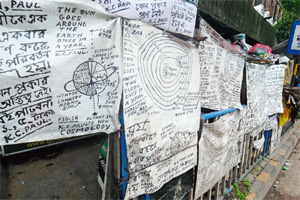 According to his theory, Mercury and Venus, which do not rotate, and Mars, which does, all revolve around the sun and follow the sun’s revolution around earth.

“I have been saying since 1974 that we will never find life on Mars. Mars has two motions, rotation and revolution, while the earth has only one, rotation. Life can grow on earth but not on Mars," says Paul. In fact, unlike a lot of Kolkatans, Paul does not come across as a voracious reader; he has simply lifted no more than what he needs from the works of Plato, Aristotle, Ptolemy, Copernicus, Galileo and Kepler.

Although he has been living on the street for more than 10 months, since he left home, Paul keeps an eye on the latest developments in the scientific world—be it the recent landing of National Aeronautics and Space Administration’s (Nasa’s) Curiosity rover on the surface of Mars or research in string theory—through newspapers and other periodicals.

Born in 1940, Paul says he first became interested in astronomy after joining the army in 1962. He quit the forces a few years later, but not his passion for stars and planets that helped him arrive at his present model of the universe. Without the credentials required to take part in scientific forums, Paul—like all true Kolkatans— took the fight to the streets.

Any visitor to Kolkata will easily identify it as a city full of graffiti, most of which is done by political parties who have in the past ignored court orders to paint their messages on walls. Spray-painted graffiti, like the one seen in other modern cities, has been a late entrant in Kolkata. 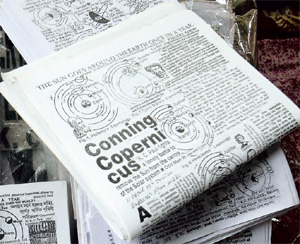 But Paul’s has been a lone insistent voice that has expressed itself wherever it could—the base of a lamp post, a portion of a wall—for decades. Mostly using capital letters in black against a whitewashed background, Paul has told the world that “The sun goes around the earth once in a year", and “All scientists all over the world are fools". He has signed his name underneath each and gave his address and later, his mobile phone number.

Could Paul have done the same in any other city, or did he get away with it because of Kolkata’s tolerance for eccentricity? He came close to being beaten up twice and has been threatened now and then, but there has never been any sustained campaign to shut him up.

“Maybe it has to do with the attitude of people here: They may not take part in what you do, they may even ignore you, but they do not usually get in the way," says Bose.

Writer Nabarun Bhattacharya has a different take. “People of Kolkata largely ignored the man and that gave him the licence to carry on with his fight," he says, describing Paul as “the real Fyataru", the fantasy characters who are capable of doing damage through subterfuge and who populate some of Bhattacharya’s fiction.

Paul also sells books and pamphlets at minimum cost to anyone who is interested in his ideas. The publications are a curious medley of diagrams and texts containing his calculations as well as those of other astronomers, articles written on him in the media and scores of letters written in response to his theory. 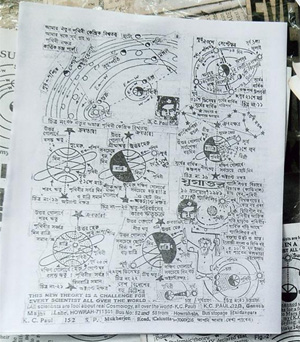 For years, his family—wife and children—let him do what he wanted. But matters came to a head in late 2011 and Paul took to the streets. “I left home on Saptami during last year’s Durga Puja," Paul says. “At home they wanted me to draw my army pension and sit tight."

The man’s savings have nearly run out, but that has not dimmed his enthusiasm. “It takes balls to stand in front of a bus full of people, who all know that the heliocentric model is the accepted model of the universe, and to tell them otherwise," says Aritra Chakraborti, a researcher who recently met Paul near the planetarium. “I admire his zeal," says Bose, who has grown up watching Paul’s graffiti. “I do not know the scientific validity of Paul’s theory, but that does not make it any less important. The important qualities of his fight are defiance and dissidence."

These are two qualities not popular these days in Bengal. Bhattacharya mentions the case of Shiladitya Chowdhury, a farmer who was arrested as a Maoist after he questioned the chief minister at a political rally in Belpahari in West Midnapore district last month. “What happened with Shiladitya is a terrible attack on human freedom," says Bhattacharya.

Not even remotely political, Paul’s opinions are simply motivated by a desire to understand the world. For Kolkata to remain the city it has always claimed to be, it is important that Paul is allowed to speak, however eccentric his ideas may seem.