BlackBerry is hoping for Android-based miracles 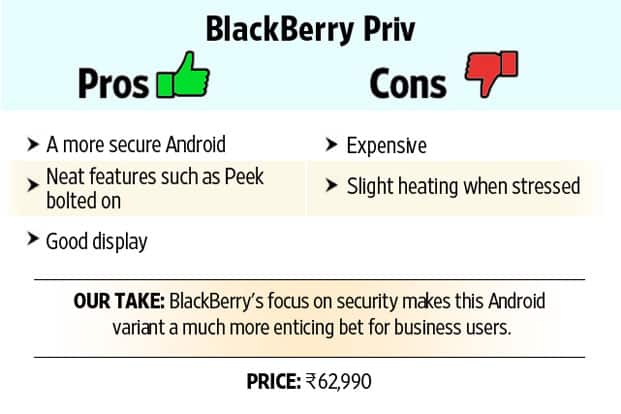 The biggest change is under the hood. Instead of BlackBerry’s own operating system (OS), this runs Google’s Android 5.1.1 (Lollipop) software. And with all the additional security features added on, this is BlackBerry’s vision of a more secure flavour of Android, which other Android smartphones don’t have. A best of both worlds scenario—the flexibility of Android in terms of the variety of apps, along with the bolted-on security features and productivity-centric apps. Many unnecessary Android features, which could be targeted by malware, are blocked or locked down. Encryption ensures data is only accessible to users with the password/PIN. The Integrity Detection feature prevents software tampering, validates hardware components and ensures security apps aren’t force-disabled by malware. The DTEK app will throw up a red flag if it detects something amiss with the security settings. The physical keyboard is the second big highlight of the phone. The Priv looks like a touch-screen-only phone, but hidden underneath is a slide-out physical keyboard. For most tasks, the on-screen keypad will be more than adequate—it has an excellent layout and word suggestions similar to what we have seen on the BlackBerry Z10 and Z30 smartphones. The physical keyboard does take some getting used to, owing to the key size and layout. And, stability/balance is an issue when you are typing on the physical keyboard. Despite the genuinely good user experience, the price tag is a stumbling block. While business users will appreciate the security features, the Priv will remain just another Android phone for most potential buyers.