It was a signature Andalusian winter night: clear, calm, with the cool friction of anticipation. A line of well-heeled young men and women passed through a large wooden door on Calle Cabezas (Calle is Spanish for street). Inside, they joined a couple of hundred people spread out over several dance floors; a hundred more were entertained by flamenco—a renowned Andalusian genre of music, song and dance noted for its energetic, staccato style—from behind the velvet ropes, on the gilded first floor. We were at a palace-turned-nightclub called El Tablao del Bereber and it was 10pm in the charming town of Jerez de la Frontera.

Flamenco was elegantly alive here and on other local stages, and would play, wonderfully loud and tremulous, till sunrise. We would stroll home, perhaps not quite knowing where home was, after having danced much of the night, veritable gypsies; nicely upended, yet sated in the temporary home of just rendered flamenco music.

I had travelled to Jerez to follow the electric gypsy trail of music and dance which leads from Rajasthan to Spain’s Andalusia, focusing on its farthest and southernmost crescent. 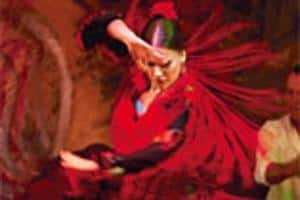 Often colourful, iconic characters—legends like Django Reinhardt pioneered “gypsy jazz"—gypsies were also victimized during the Holocaust and continue to be discriminated against by those seeing them as restless encroachers often in and out of jobs, one casualty of their famously instinctive need to move. In Andalusia, they gave us flamenco, making a powerful new music from the sounds of the empire which had set them in motion.

My own journey was charted by night after night of flamenco in the hot spots of Andalusia, starting in Seville and ending in Jerez. Charming old houses turned to gracefully appointed inns and a gorgeous local Alcázar (a former Moorish fortress; one with the same name is famous in Seville); a classic Arab hammam by a divey gypsy bar; sherry bodega tours and horse mania—Jerez is the lodestone of the flamenco map and it became my base. Here were the parties of today’s flamenco, still adored by the young—who chose it over new sounds and made it contemporary—and cherished by the old. Even old legends like Camarón de la Isla, considered modern flamenco’s most popular and decisive cantaor (singer), who died in 1992, are decidedly of the moment in Jerez; his potent Como el Agua wails at frequent intervals.

In the mornings, it played while I drank my strong-brewed Spanish coffee; at lunchtime, it was in the chatter of the locals who planned to attend the latest concert; in the evenings, it was in my tapas and wine at Bar Gitaneria (literally “bar of the gypsies"), where, minutes after we saw him on television, local maestro Diego Carrasco entered. With local friends Irene and Nuria and a handsome new gypsy friend, Israel Santiago, we entered a Roma salon of sorts.

Tall, fair and lanky, Santiago looked like the member of an alternative Brit band; it was hard to believe he was a gitano (gypsy). “Being gitano might not be the primary fact of my existence, but I cannot ever imagine living anywhere else; the gypsy community is so integrated," he said. He went over to greet Carrasco then; soon the maestro had joined us and the men at the bar were clapping, singing, dancing, while Santiago enacted several classic flamenco positions. It was utterly normal for even the least gitano among them to be gypsies, flamencos, in this town.

The Cathedral of San Salvador, one of Jerez’s chief attractions. Photo: Thinkstock

I combined the bucolic Spanish countryside with classic Tony Gatlif gypsy film Latcho Drom (1993) on my laptop in a twin voyage, on the next leg of my trip: from gypsy homelands in India to new heartlands in Europe, from the pure flame of flamenco in small-town Jerez to its louder, more cosmopolitan self in Seville.

For, ultimately, it was community that sustained flamenco, the music of gypsies. That Jerez night at the Bar Gitanera, at a different juerga, I had asked Santiago why he thinks gypsies wander less, today.

It was the most obvious difference between an old way of life and a new one. “In the old days, we travelled together," he said. “Now, we would feel lonely, travelling alone, as people do."