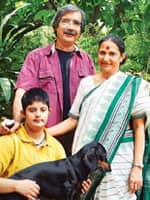 Mike and Ranjana Pandey with daughter Devika and their pet.

He says he had his task far from cut out. Designing a house for creative people who are intimately involved with the space they live in is not easy, says Nigam. It calls for a very high level of detailing as well as catering to a variety of well-defined and clearly articulated needs, he says.

The house itself is large, spread over an area of 4,500 sq. ft. A split-level basement accommodates the office for Riverbank Studios, Mike’s New Delhi-based documentary film production company. Living and dining areas on the ground floor include bedrooms for Mike and Ranjana and daughters Devika and Radha. There is a guest bedroom and a small study-cum-office on the first floor, and son Gautam has his bedroom on the second floor. As is evident, that is a fair bit of accommodation. 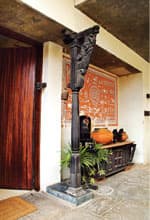 Entrance to the ground floor with a carved wooden pillar from Gujarat. The mural on the wall was painted by artists rehabilitated after the 1999 Orissa cyclone.

From discarded pinewood packing containers that provided inexpensive, good-looking panelling for the office in the basement to a carved pillar rescued from a house in Gujarat that was being demolished, lead-free paint on the walls and bits of waste slate held together with lime mortar for the entire expanse of exterior walls, the Pandeys’ house is an eloquent example of a more-than-usual concern for the environment.

All the furniture is made of rosewood or sheesham. “Pine and sheesham are much more durable woods than teak as they have resins which keep away termites," says Pandey.

Personal touches and a sensitivity for those with special needs are evident throughout the house, providing clear glimpses of the people who live here. There is a ramp for easy wheelchair access to all areas of the house, enabling Devika to get around easily, things collected on travels are all over as are reminders of projects completed—posters of Pandey’s documentaries and Ranjana’s NGO Jan Madhyam, and colourful paintings by Devika in almost every room.

The house uses solar power for heating water. There is minimal use of air conditioning and artificial lighting—Nigam’s design takes care of most of these requirements.

1. In sync: Mike Pandey’s office for Riverbank Studios in the basement. The panelling is made of recycled pinewood. “I noticed these Japanese pinewood containers, meant for transporting Maruti Suzuki cars on large trucks, being sold off to the kabadiwallah. I bought them for Rs250 each and got extremely durable wood panels for the entire office space," says Mike. The painting of a tree and birds is by Devika and on a side table is a 450-year-old clam shell from the Andaman Islands.

2. The exterior walls are clad in cut-away slate pieces, bound by lime mortar. “A neighbour who had used natural slate on the exterior of his house was disposing of three truckloads of these cut-away pieces. I asked him to sell them to me and used them," Mike adds.

3. The iron armour is a memento from Pandey’s association with the Hindi film Razia Sultan for which he was special effects director.