Thanks for Visiting Mint
You seem to have an Ad Blocker on. Please turn it off in order to continue, or whitelist Mint
HOW TO TURN OFF AD BLOCKER
OR
REFRESH IF YOU ALREADY TURNED OFF THE AD BLOCKER
Home >Mint-lounge >Features >Royal wedding: Let them not eat the same old cake

Royal wedding: Let them not eat the same old cake

Traditionally, the English have been quite adventurous with nuptial sweets. A medieval tower of breads, scones, biscuits and rolls (a precursor to the croquembouche) over which the bride and groom had to kiss, was followed by the 17th century Bride’s Pie, stuffed with oysters, dried fruit and whole little larks. The easy availability of sugar led to the traditional snow-white icing. Over the years, royal wedding cakes gained and lost tiers depending on war-time rationing and peacetime plenty. It is only recently that the royal wedding cake has become playful, with Prince William tipping a hat to his childhood favourite, a chocolate biscuit cake, for his wedding in 2011. Right now, the world’s eyes are on Claire Ptak, owner of a boutique bakery in Hackney, London, which has bagged the assignment to create the wedding cake for Prince Harry and Meghan Markle. But there’s a whole world beyond cake, which is why the Lounge team has picked a trio of India-inspired desserts fit for the royal table.

Chef Manish Mehrotra’s Mishti Doi Cannoli, Amaranth Laddoo is a star at his Delhi restaurant Indian Accent. The dessert features hollow pastry shells with a filling of sweetened yogurt, served with a side of amaranth laddoo, an Indian version of a seed-rich brittle. “The Sicilian classic cannoli is known all over the world and the thick, flavoured yogurt (mishti doi or shrikhand from the eastern and western parts of India) mirrors modern Indian cooking to perfection," says Mehrotra. Cannoli is also a tribute to Markle’s love for Italian food. 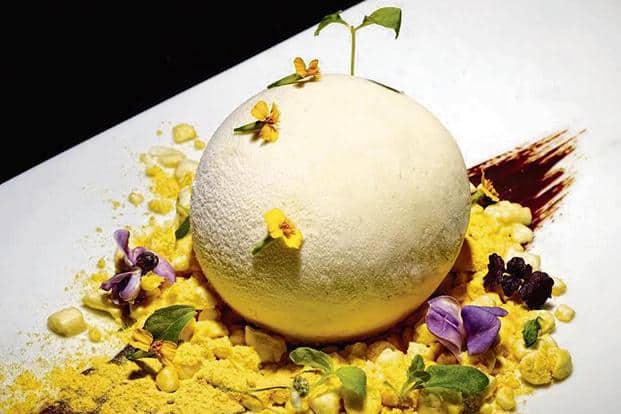 Chef Gaggan Anand shows off his molecular wizardry with this white chocolate and mango confection. A beautifully tempered chocolate shell encases a cardamom-flavoured mango cream; the entire structure rests on a bed of freeze-dried mango. Both Markle and the prince are fans of fresh seasonal produce, so what better dish to represent India than one which showcases the king of fruits? Chef Atul Kochhar’s restaurant Benares is known to push the envelope when it comes to desserts. This gorgeous plate is a modern take on a Goan classic that combines coconut with fresh citrus flavours and a variety of dessert textures. It could be the perfect addition to a wedding feast as both Markle and the prince love citrus flavours.