Home >Mint-lounge >Features >Review: HTC Desire 825 is too expensive for what it packs

Review: HTC Desire 825 is too expensive for what it packs 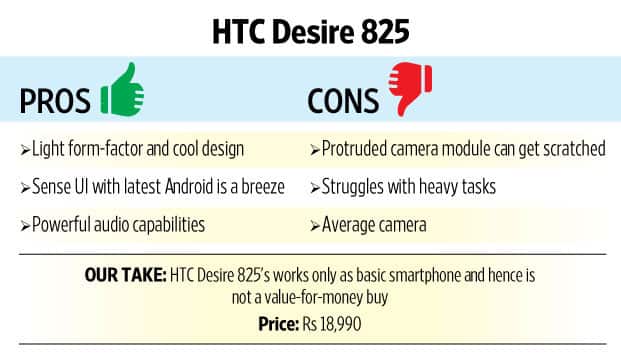 The arrival of the new phone makers has changed the game for established brands such as HTC, Sony and LG. None of them figure in the list of top phone sellers in the country but this doesn’t mean they don’t have a variety of phones. 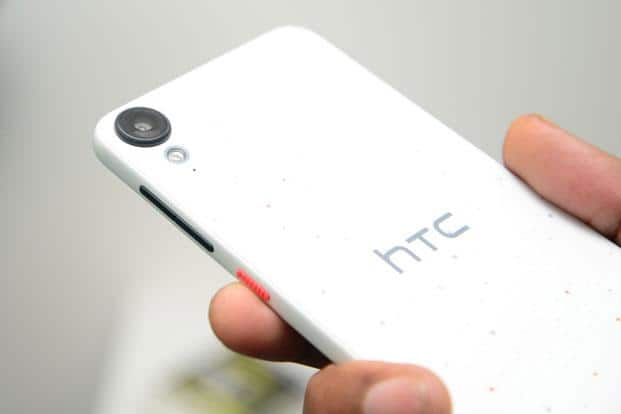 Desire 825 is a good-looking smartphone with a plain front and a unique looking back panel. While the matte finish on it almost feels like rubber, its colourful dot pattern on the back gives it a unique personality of its own. The phone feels well-built, but feels taller for a 5.5-inch smartphone due to its wider bezels above and below the screen. However, the phone weighs 154g and is 7.4mm thick, which is impressive and is the reason why the phone feels handy. There are few design niggles such as the protruded camera module which faces greater risk of picking scratches and the poor quality flap cover which is meant to protect the two SIM card slots and micro SD card slot.

The Vibe X3 weighs 175g but feels good in the hands due to its curved back design. It also comes with a fingerprint sensor, which gives it an edge over both the Desire 825 and the Creo Mark 1. Creo Mark 1 feels a little hefty at 190g, but is quite well-built if you don’t mind the glossy black finish.

The 5.5-inch display in the Desire 825 has a resolution of 1280x720p, which feels a bit out of its league at this price point. The viewing angles are good and so is the colour reproduction. However, it doesn’t feel at par with its rivals, especially when it comes to movie playback and gaming. It can handle regular tasks such as reading and web browsing well, though. The smartphone runs Android 6.0 with Sense 7.0 UI, which is one of the few custom UIs that doesn’t feel cluttered. It is neatly designed with symmetrically sized app icons. It offers some useful customisations such as the option to change the colour temperature in the display, rearrange apps, apply new themes and check out news and social media posts on the pre-loaded HTC Blinkfeed aggregator. The Vibe X3 has a colourful Vibe UI too with customisation options, but it runs an older version of Android (5.1). The Creo also runs an older Android but it offers a near plain version of Android with some cool customisations and the assurance of one update every month. A promise it has fulfilled so far.

Performance: Not meant for power users

HTC has used the Qualcomm Snapdragon 400 quad core processor with 2GB RAM to power the Desire 825. This combo can handle basic tasks, regular web browsing, switching between apps and even certain levels of multi-tasking. It struggles with games such as Real Racing 3 and the FIFA 16, which is a bit of a letdown for a mid-range smartphone. The reason is that the processor is a fairly old one, and none of the Desire 825’s rivals use it anymore. There is only 16GB of internal storage, but it can accommodate up to 128GB using a microSD card. The phone supports 4G networks and has dual SIM slots.

The Lenovo Vibe X3 and the Creo Mark 1 have a clear edge over it in terms of performance as they run on a more powerful processor and handle heavy tasks smoothly. Their internal storage is also more, as both Vibe X3 and Creo 1 offer 32GB internal storage with support for 128GB microSD cards.

Audio: Powerful but not the first

The key highlight of the Desire 825 is the Dolby powered boom sound speakers. There is a theatre mode and a music mode and they deliver brilliant sound quality. The Vibe X is more at par with the Desire 825 as it comes with Dolby Atmos-powered front-facing speakers.

Battery: Not at par with rivals

The Desire 825 comes with 2,700mAh battery which lasts a day at most on moderate to heavy use. The Mark 1 has slightly bigger 3,100mAh battery but don’t expect more than a day’s backup as it can be a bit inconsistent depending on usage. The Vibe X3’s 3,500mAh battery is the best placed of the three and can hold on for a whole day and a bit more, with ease. 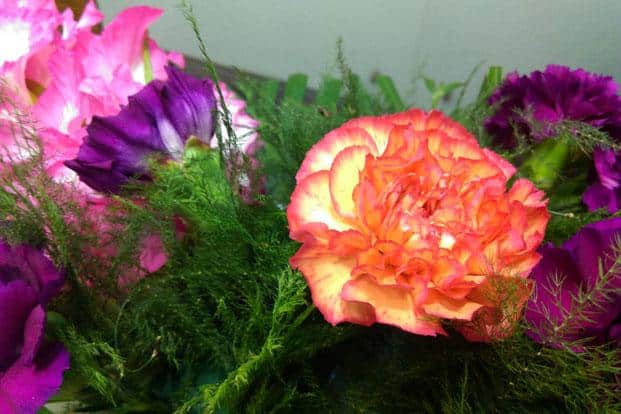 The 13-megapixel camera is not in the same league as its rivals. While the colour reproduction is good, the detailing is poor. As a result, pictures look blurry and noise ridden with the slightest of zoom in. The camera app is pretty basic and doesn’t offer any interesting modes or fun filters. There is panorama mode and selfie mode and you can record videos in full HD. The 5-megapixel front camera looks good and handles group selfies well.

The Desire 825 is HTC’s latest gamble to crack the mid-range Android smartphone space. But it comes up against the more loaded Lenovo Vibe X3 and the Creo Mark 1, and because of the weaker spec sheet, the Desire 825 loses out to them whether you compare display resolution, camera quality, and the ability to handle anything more than basic tasks such as browsing and messaging.