For the girls, a gaudy pink room that no woman who has outgrown her Barbie years would ever live in; for the boys, the same setting is duplicated in blue. The beds are lined up in front of mirrors which, through reflections, mimic each room a thousand times over. But those mirrors have a duty that is far more sinister than simple reflection. They hide cameras which catch every move in the room, recording every sneeze and snatch of conversation for an audience that watches the fishbowl and judges it from the comfort of their private homes. 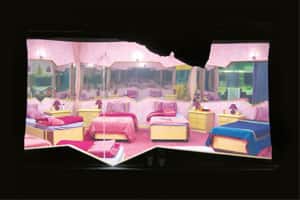 Framed: Gupta’s shot of the mirrored girls’ room at the Bigg Boss house.

Mumbai-based artist Shilpa Gupta captures the bizarre voyeuristic quality of modern electronic media in Big Boss, a photographic work that depicts the inner workings of the Indian reality hit Bigg Boss. “I wanted to explore the relationships between the self and cameras," says Gupta. Her series is part of Frame/Grid/Room/Cell, a group show at Mumbai’s Bodhi Art.

The exhibition, which is curated by art critic Gayatri Sinha, brings together the disparate works of seven formidable contemporary artists under one theme. “The different ideas in the title are all interconnected," says Sinha. “They’re private spaces, whether a frame, the framework of a grid, a room, or the monastic space of a cell." In keeping with that idea, the gallery will be divided into different-sized areas, each artist occupying and transforming his or her own slot. The theme has been interpreted differently by each one, and every work has been made to fit the spaces of this show.

Bangalore-based Surekha worked on a video installation that follows the movements of a woman kneading dough; projected through three monitors, it challenges the ideas of private spaces and public areas. She used the theme of the grid within her work. “My work has to do with kitchens and, just like the theme of the show, a kitchen can be many things to a woman—it can be just another room, a frame for her activities or a sort of cell that is painful," says Surekha. The artist has been allocated a 7ft x 10ft space at the gallery into which she has condensed the work.

Other works were a greater challenge. For the past five months, Jagannath Panda has been working on his untitled sphere sculpture for the show. The large fibreglass exhibit is layered and covered in a collage of painted fabric meant to represent the vitality of the environment, its foliage and creatures. But, there was a problem; if even the slightest pressure was applied, the whole exhibit would start to roll around. “It was a big challenge for me. It wasn’t a flat surface like most sculptural works, and I had to work out a way to keep it static." The solution, he realized, was to place a piece of iron weight inside the ball so that even if it moved slightly, it would eventually rest in its original position.

Despite the fact that pieces have been made especially for this show, the works reflect a period of each artist’s work and follow the general themes they have been working on recently.

Spheres have always been a special vent for Panda’s artistry; Surekha has dealt with the idea of kitchens before, using them to comment on gender-based issues such as the status of women in society and domestic violence. Nalini Malani, who has produced several versions of her Stories Retold for other shows, will display another one in the series, this time with Krishna at the core; the always emphatically political Riyas Komu comments on the times with what he refers to as the Ego Brain. The wood and cement creation is embossed with a map of the US that seems to spill over from a skeletal face and brain. “It’s a direct reminder of war and what happens whenever the ego develops and increases. These days, I deal a lot with the language of the dead, and innocent civilians who get caught in the aberration of war," says Komu. His large installation piece seems too big for a grid but Komu says he has used the sense of suffocation to his advantage.

Anita Dube and Sunil Gawde are the two other artists that form this group which, according to Sinha, was brought together because they are a conceptually interesting lot working with a variety of media. “The most interesting thing will be to see how each one will treat their individual space," says Sinha. As good as seven shows in one. Happy Diwali.

Frame/Grid/Room/Cell will be on display at Mumbai’s Bodhi Art gallery from 5-25 November.