Home >Mint-lounge >Features >Writing is all about dealing with resistances: Amitav Ghosh

Writing is all about dealing with resistances: Amitav Ghosh

The author on completing his epic Ibis trilogy, and the art of writing

“I had a strong presence of her. Especially of the eyes. That’s how it started."

“I would have to draw her."

Eventually he gives in.

“In my vision of her, she had a rounded face, she’s young but looks older than she is, she has these startling eyes, she just has this powerful presence."

His tone isn’t romantic. It is factual and thorough—as though he were describing someone he sees every day. Someone who is always there but you never really know till they are gone.

I meet Amitav Ghosh over Skype, he in New York, US, I in Kolkata. The Kolkata-born author of eight novels, the last three making up the Ibis trilogy, is talking about Deeti, the protagonist of Sea Of Poppies, the first of the trilogy shortlisted for the Man Booker Prize in 2008.

So how does a vision of a person lead one to write a vast book on opium war that spans over 1,500 pages?

“I knew she was going to leave. I knew this was a book of departures. And I began to think how a departure for her would be possible."

Deeti, a widow who escapes with her lover on a ship set for China, led Ghosh to Mauritius, digging through the archives for information on indentured migration. What emerged was the first of his hugely ambitious Ibis trilogy and what would become an epic 10-year project.

Sea Of Poppies, set in 1838, is the story of Ibis, a former slave ship that is used by the East India Company to smuggle opium, grown forcefully by the British on their Indian plantations, into China. The second of the trilogy, A River Of Smoke, published in 2011, was shortlisted for the Man Asian Literary Prize. It continues the ship’s voyage to Canton, southern China, where the Chinese retaliate by blockading the British import.

The third and final book of the series, Flood Of Fire, takes the story up to the First Opium War, when the British send a naval expedition to force China’s hand. The novel released in India this week (see page 18).

Ghosh, born in 1956, always knew he would be a writer. He studied at The Doon School, and did a masters in anthropology (urged by a friend, he adds) from the University of Delhi, worked in the newsroom of The Indian Express (“during the Emergency, it was a time of high political excitement," he says) and then went to Oxford for a PhD.

“Writing my PhD was just like shutting your eyes and holding your nose and jumping into a river." Ghosh began the novel the day after he finished his thesis. He wrote away in a domestic help’s quarter, on top of a house in New Delhi, worked at a job that paid ₹ 600, while watching his friends succeed in their careers.

“Risk is the most important thing about a career in letters. Writing is much more than talent. It is about guts. Writers are risk takers. In a way they’re like small-scale entrepreneurs," he says.

Ghosh’s writing career started with A Circle Of Reason (1986), followed by one of his best known works, The Shadow Lines (1988). A book, he says, which he even today invariably gets questions about at press conferences. “I think it’s wonderful. How many books have that kind of life after more than 25 years," he says. “That book, and In An Antique Land, both made their way into the world in a very significant way."

The latter, published in 1992, marked a shift in Ghosh’s writing career—one that merged meticulous research with story-telling. While writing it, he found himself having to decipher documents in Judeo-Arabic, a language unknown to him. When I ask him if he used the assistance of a translator, he sounds insulted. “I learnt the language. Are you kidding? Once I was able to achieve that, I felt I could do anything." he says.

Most of what Ghosh did for Sea Of Poppies was primary research. There were no books specifically on the military aspect of the opium war. It is a tricky matter to deal with the rigidity of facts and data on one hand and the flexibility and imagination one requires to write fiction on the other. He says he finds “that it (facts) helps, far from being a limitation. It gives you a scaffolding".

Judeo-Arabic was not the only language Ghosh taught himself. For Sea Of Poppies, it was Laskari, a language spoken by sailors of the time. A hybrid of Portuguese, Malayalam, Gujarati, Hindustani and Arabic, among others, Laskari even now finds its way into nautical vocabulary as well as in Hindi and Bengali. It is found scattered across Sea Of Poppies, and reading it is much like walking along a cobbled street—at first awkward: “Serang Ali wife-o hab makee die"; “You take pistol in pocket, if bugger try shangai, shoot in the face." Then you kind of get the hang of it. 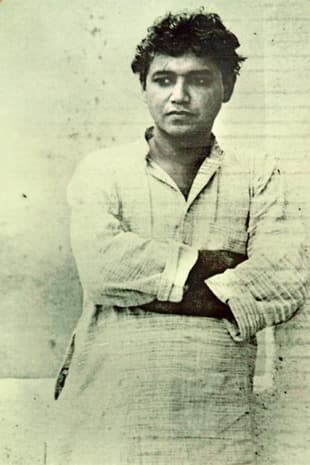 Ghosh tells me that in most European languages, nautical dictionaries predate traditional ones, going back as far as the 18th century. Sail ships, he noticed, had a diverse range of men—Malays, Chinese, Indians, Africans—who must have had a common language. And the officers, who were mostly white, would have needed a dictionary to decipher it. With the help of Harvard’s resources, Ghosh tracked down a Laskari dictionary, written by a Thomas Roebuck and published in Calcutta in approximately 1806. There is a force in his voice as he talks about this incredible discovery. “Incredible because this thing had just vanished from public memory."

If given an opportunity Ghosh would go on with discussions of sail ships and lost languages. I, however, am anxious to get back to his first apparition. I ask him if there were moments when Deeti startled him.

“Constantly," he says. “They do things you don’t expect. Go down roads you don’t necessarily want them to."

There is a scene in which Deeti rescues Kalua (whom she would later run away with). Beaten and humiliated, he lies unconscious in the middle of a poppy field. Deeti who has never been so close to the naked body of a man before, is hesitant to approach him. Then she does something most unexpected, shocking and yet oddly tender. “She sat with her hand resting intimately upon the most untouchable part of this man."

“That was certainly not on my mind before," Ghosh laughs. “It’s wonderful isn’t it? It just weaves in an element of surprise. Every time I was stuck, I would always go back to Deeti and she just carried me forward. She was like the wind in my sails."

“Writing is all about dealing with resistances," Ghosh says. “The resistances in the material and the resistances within yourself. As soon as something is difficult, if you come to a resistance, that’s important simply because it’s resisting you. They are the little fissures in the earth out of which the material emerges. I had a mantra, that there is always a way and you have to find it."

With Flood Of Fire, the Ibis trilogy, which Ghosh first conceived in 2004, comes to an end. And with its end, Ghosh feels an incredible sense of fulfilment.

“I set myself a very difficult task. It was a mortal struggle. At times I thought I was mad to have undertaken something so difficult because it wasn’t just about writing a novel." He is referring here to the vast amount of research he has had to do.

This month, Ghosh was shortlisted for the Man Booker International Prize for his entire body of work. Yet his biggest sense of accomplishment comes from the fact that he has always been able to support his family and himself through his writing.

“It’s what I feel proudest of."

He does, however, admit that he is possibly from the last of a generation of writers who will be able to do so. “I could give you a long diatribe about the economics of publishing," he warns me. “What’s happening to the publishing industry is exactly what happened to the music industry. The Internet has been disastrous for both," he says. “The music industry has adapted by creating a second line of revenue through concerts and public appearances such that those have become the primary source of revenue instead of royalties."

“A similar thing could happen to the publishing industry. There is a demand for writer appearances. But the only ones who profit from literary festivals are the event managers. The industry doesn’t think of it as a revenue stream and nor do any of it (profits) go to the writers."

I point out that in India all cultural events are free and are expected to be so by the attending public. He corrects me.

“Not in the famous Dover Lane musical concerts of Calcutta. Those are ticketed. But you’re right about the literary festivals. They claim to have thousands of people attending. Would even a fraction of them pay for tickets? If not, what value does that place on writers? While they pay ₹ 100 to watch a film, they wouldn’t pay even half of that to go see a writer."

It is that very economic anxiety, however, that has kept Ghosh writing. In the last 25 years, he has held only one job—as a distinguished professor at The City University of New York.

“I had this tenured job and this great salary and this salary would arrive in my bank account every month. But after I’d been there six months, I couldn’t stand that feeling of security. I knew that if I kept that job, I would wither away. That’s the thing. The very insecurity of the writing life is in some way what gives you the adrenalin to go on."

As parting words, I offer him the only wisdom that comes to mind. I tell him that writing fiction is akin to taking one’s clothes off and standing naked in the middle of Khan Market in New Delhi.

Buku Sarkar is a writer who divides her time between New York and Delhi.