Cousins Savinay Jain, 27, and Mayank Sethia, 25, were working in the corporate sector when the entrepreneurship bug bit them. “The bug was always there," clarifies Jain quickly, “since we both come from families that own businesses. The prospects were good, but work was starting to get clichéd." Jain worked as a financial analyst with McKinsey and Co. for three years. 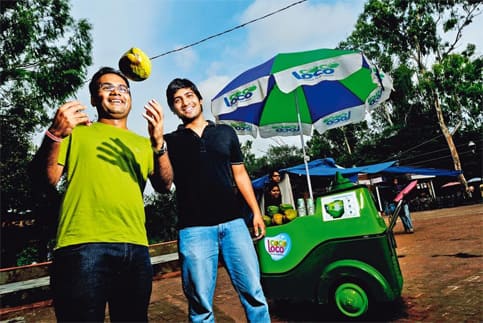 Nuts about it: Savinay Jain (left) and Mayank Sethia travelled to Chennai and Bengal to source . Photo Priyanka Parashar

At a family get-together last year, a cousin wanted some coconut water. They drove around from one Gurgaon street corner to the next shopping complex. They found all manner of fruit juice, but not one coconut-water seller. 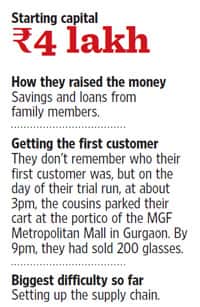 On the Google search engine, Jain and Sethia found a portable machine that is common on Brazil’s beaches. They studied the contraption’s mechanism and got two similar ones made by a fabricator in Manesar, Haryana.

“It consists of a tray where the water is poured in. The tray is connected to a coil, at the end of which is a tap. Dry ice is packed around the coils to chill the (coconut) water as it passes through the coils. But there is no chance of adding impurities," explains Jain. To make the machines portable, they fitted them on two pushcarts with bright green plastic bodies sporting the Coco Loco logo. Their business was ready to roll, literally.

“It was encouragement enough," Sethia says. By the end of the financial year, they had set up carts at six malls and big-ticket retail spaces across the National Capital Region, met their overheads and clocked about 20% operational profit.

They already have a franchise each in Udaipur, Rajasthan, and Moradabad, Uttar Pradesh. Their short-term goal is take the venture across the country, especially to states which do not grow coconut.

Sourcing the coconuts proved to be the biggest stumbling block. “It was unanticipated. We started buying from the Azadpur mandi (the wholesale fruits and vegetables market in Delhi). But the prices were high, quality unreliable and the mandi is overrun by the local mafia. The moment they realized we were inexperienced, they tried ripping us off," says Jain.

So they set out to build a direct supply chain from the coastal areas. “We now have our supplies delivered directly to our warehouse in Gurgaon. But that too came with its set of challenges: The consignments are delivered in batches of 10 tonnes and need to be consumed within a week. That’s about 6,000-7,000 coconuts in a week, which is way above what we sell. So now we have started selling our excess supply to local nariyalpaniwallas," adds Jain.

Another reality check was the rent at malls. “They can be quite prohibitive. Our target is the fitness- and health-conscious consumer. So we have to be in upmarket locations—like malls and retail spaces—which have high rents," says Jain.

They are sure of what they will not do—go back to steady jobs. “It’s going to be some other new venture, that’s for sure," Jain says, as Sethia nods in agreement.